Being a celeb can be a real hard slog in India, especially with unubiquitous trolls lurking on social media. This time it was badminton star Jwala Gutta. An athlete who has represented India numerous times in international events and has made us proud by bringing glory to the country has now been termed anti-national.

Why? Because her mother is of Chinese origin.

The stand-off in the Doklam plateau between Indian and Chinese troops turned into an opportunity for trolls online to make ad hominem remarks on the Indian athlete, and her parentage.

"Is it because your mother is from China that's why you oppose Modi every time?" asked a Twitter user. The two-time Olympian gave it back quite fiercely, as she tweeted, “When you bring my parents in the conversation… you wish you didn't see this side of me!!! Mind it."

The user then tweeted, "With all due respect to your parents. I am not questioning anyone. My intention (in fact I am eager) to know what makes the shuttler so anti-Narendra Modi." 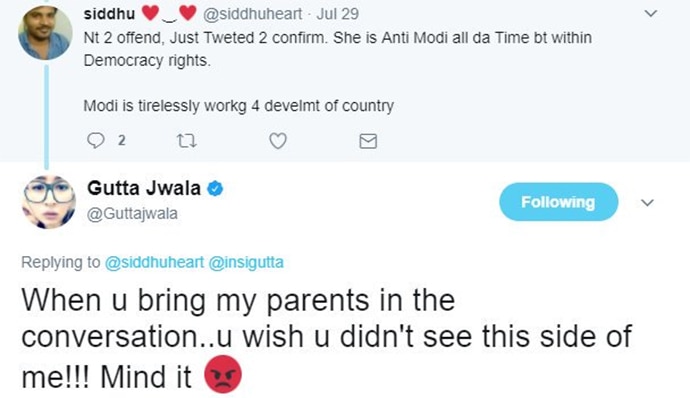 Another online (anonymous) troll asked her, “Did u ever think being a Chinese citizen would have given you more opportunities in badminton? Any regrets being Indian?” to which Gutta replied, “In the country... I am a proud Indian... and will keep striving to make a better system for sports in our country!!!”

In the country...I am a proud Indian...and will keep striving to make a better system for sports in our country!!!

That wasn’t all. A different user tried to steer the conversation in a different direction, but attempted to shame her anyway. The user hinted at Gutta’s alleged affair with ex-cricketer Mohammad Azharuddin, and asked her, “Ajjruddin shab ke kya hal hain.”

The feisty badminton player, who is not the soft celebrity target trolls are used to, replied saying, “Yeh sab mere saamne bolna (you should have the guts to say this to my face).” 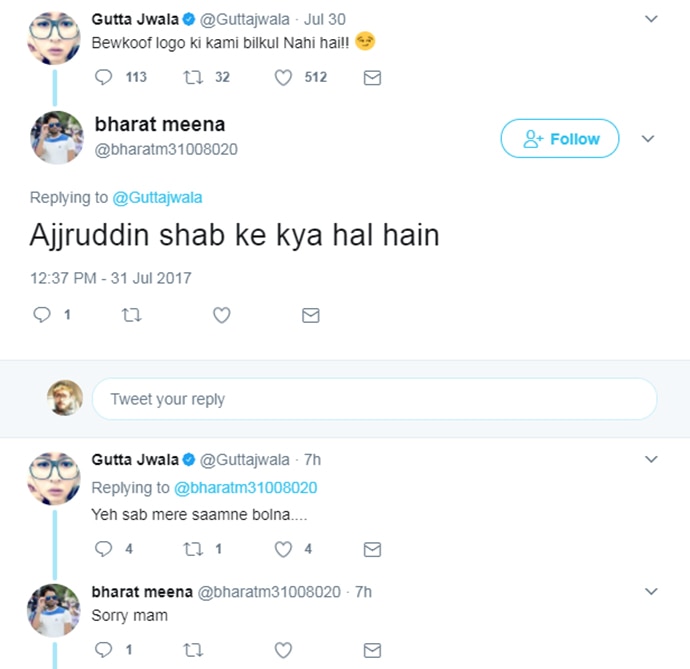 Yes, the badminton doubles star’s mother Yelan was born in Tianjin, a metropolis in northern coastal Mainland China. She is the granddaughter of a of a man called Tseng – the chief editor of a Chinese newspaper in Singapore, who was inspired by india’s struggle for freedom. It inspired him so much, he came to meet Mahatma Gandhi in 1937, and stayed with him at his ashram for several months.

Yelan Gutta first came to India in 1977 with her grandfather to visit the Sevagram ashram, where she translated Gandhi's autobiography and other works into Chinese language.

Gutta had once remarked, "I have Chinese blood but I am total Hyderabadi. Though my mother could have gone back to China, she chose to stay here as an Indian national. This nation has given me everything."

One might think it is odd that people ask an athlete that represents the country abroad to provide a certificate of patriotism, but that's India for you.

That Jwala Gutta's mixed lineage is being question and that her mother's Chinese birth is being used as an issue to question her loyalty towards India is shameful on multiple counts. It also goes on to illustrate how Indians, especially anonymous trolls on the internet, equate one's views on Prime Minister Narendra Modi with their loyalty to the country.

"My mom is a very gutsy woman and I think I go after her. A lot of my characteristics go after her. To come from a different country where she was born and brought up, to come to a different country like India and get used to the culture and live here, now she has her own business which is doing really well, I think only very strong women can do it," the 14-time national champion once said in an interview.

Gutta should not care for what troll armies have to say. And neither should her mother.