The victory of the Opposition in the Kairana Lok Sabha by-poll in Uttar Pradesh and six other Assembly constituencies across the country is significant in many ways. Firstly, the BJP has lost simple majority in the Lok Sabha and it is the third consecutive defeat of the party under chief minister Yogi Adityanath in UP. This could well be a sign of things to come.

That the communal pitch raised by Yogi Adityanath in Kairana — a town close to Muzaffarnagar, epicentre of 2013 riots — has been rejected by the electorate shows a sense of weariness with the Hindu-Muslim divide, something so uniquely associated with the saffron party. And with the BJP government at Centre completing four years now, a sense of doubt has also crept in the saffron circle over Narendra Modi’s appeal.

Ever since the BJP came to power in 2014, motormouths within the party — Sakshi Maharaj, Sadhvi Niranjan Jyoti, Anant Kumar Hegde, Giriraj Singh and others — have been caught embarrassing the party at regular intervals with their vitriolic statements, busting the myth of Modi as a leader with zero tolerance for nonsense. 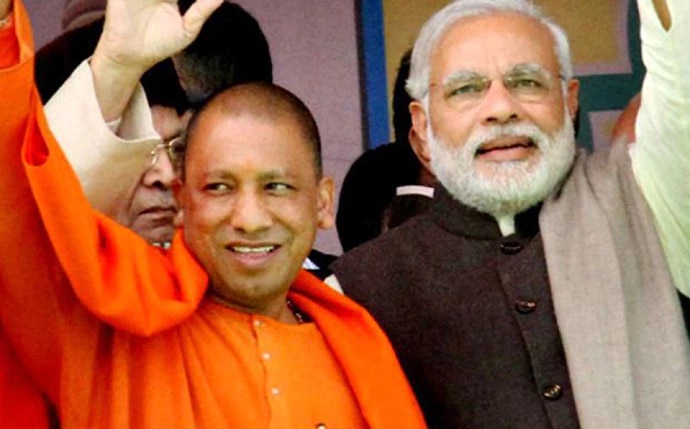 Politics of polarisation: The communal pitch raised by Yogi Adityanath in Kairana has been rejected by the electorate.

Even though the party plays the development card, it knows that if "vikas" fails to cut ice with the electorate, there is always one thing to fall back on — politics of polarisation.  Significantly, there has always been a constituency of the BJP which votes for it purely on the basis of its Hindu-centric politics. But the 2014 victory was not due to this constituency alone. Much of the credit goes to a rigorous and well-crafted strategy and projection of Modi as the Vikas Purush, a high-volt campaign bolstered by the Sangh machinery.

In any case a certain sense of weariness had set in after 10 years of UPA rule. Moreover, the issue of corruption raised by Anna Hazare and Arvind Kejriwal — which initially the RSS and BJP supported — also dented the Congress' prospects.

Promises of depositing Rs 15 lakh in every citizen's bank account, the slogan of achhe din, claims of creating two crore jobs every year and bringing down inflation to its lowest made the common man look up to Modi with hope. But that wasn't entirely unexpected. Democracy is largely about elections and change, with the BJP as natural replacement to the Congress at the national level.

But the four years it has been in power, all these issues have receded to the background. Instead the atmosphere of hate, backdoor entries into states to make India "Congress-mukt", the economic disasters like demonetisation and hasty implementation of GST have in a way exposed the BJP.

The party's flip flops on dealing with neighbours like China and Pakistan have further tarnished Modi's image. Modi versus the rest: Everything depends on one factor — a grand alliance of all Opposition parties becoming a reality.

The BJP's experiments and politics of polarisation have brought a lot of bad press to India from the international media. That the ruling dispensation doesn’t care about it is a different thing.

The momentum generated in 2014 helped the BJP win Assembly elections in Haryana, Uttar Pradesh, Himachal Pradesh, Uttarakhand and Assam. Effectively, these are the only five states where the BJP can claim a popular victory. While the BJP-Shiv Sena returned to power in Maharashtra after 15 years, there was no sheen in the victory in Gujarat (Modi’s home state). The party’s march to the south of the Vindhyas has been effectively stopped for now by the coming together of the Congress and Janata Dal (Secular). The saffron party will now be on the defensive in the upcoming Assembly elections in Rajasthan, Madhya Pradesh and Chhattisgarh.

In the first two states, the Congress has won the by-polls held recently and there are visible signs of the party posing a stiff challenge to the BJP. For now, the Opposition has reasons to be happy because the SP-BSP-RLD-Congress combination appears formidable enough in Uttar Pradesh to decimate the BJP.

Many years ago Atal Bihari Vajpayee had said that the road to Delhi goes through Lucknow. Indeed any political party anxious to call the shots at the Centre will have to perform extraordinarily in India’s most-populous state, which has 80 Lok Sabha seats.

Given the Opposition experiment in UP and Karnataka, if all non-BJP parties come together in 2019, the contest can go either way. However, it is too early to predict a BJP wipe-out in 2019, especially when pitted against a Opposition full of regional heavyweights busy fighting ego battles. The biggest challenge will be to field that one face to take on Modi.

If the Congress under Rahul Gandhi manages to wrest Rajasthan and Madhya Pradesh, it can lay a strong claim on the PM's seat. Barring the Left which doesn’t have personality-driven issues, the contenders for the top job in the Opposition are many. Modi and Amit Shah know this very well and will make the most of this situation. Also, bringing together parties like the Telugu Desam Party (TDP) and Telangana Rashtriya Samiti (TRS) will be a big challenge, not to mention the Left which is at loggerheads with the Trinamool Congress in West Bengal and Congress in Kerala.

Yet going by the sign of things, there is a possibility that the Congress and Trinamool might agree to put their differences aside in Bengal, thereby leaving little for the Left and the BJP, while in Kerala it would be business as usual between the Congress and the CPI(M).

The CPI(M) under Sitaram Yechury pragmatically believes that the party is only locking horns with the Congress in the southern state, while the BJP remains the bigger enemy ideologically. The brazen dismantling of Marxist statues in Tripura by the BJP has brought the CPI(M) closer to the Congress more than ever. With the Congress-JD(S) tie-up in Karnataka, the southern states seem to have effectively braced themselves to take on the BJP.

In Telengana, K Chandrashekhar Rao remains extremely popular. In Tamil Nadu, the DMK-led Opposition looks set to bag a large chunk of seats, while a disgruntled TDP under N Chandrababu Naidu in Andhra Pradesh can join hands with the Congress to take on the BJP-YSRC combine (should that alliance materialise). In Kerala, the saffron party is simply non-existent. So, south India with a total of 131 Lok Sabha seats and Uttar Pradesh with 80 will be the epicentre of the 2019 battle. But everything depends on one factor — a grand alliance of all Opposition parties becoming a reality.

Also read: How a woman flashing at Google Maps exposes the chinks in its armour