If death of ecology is a project, it's under rapid construction in Ennore.

An eco-sensitive zone, Ennore in north Chennai has been a victim of brisk industrial development for long. From thermal power stations to fertiliser factories, industrial ports and coal yards, Ennore hosts a number of "development" projects, contaminating its rich biodiversity and affecting the lives of the local residents.

Residents of Ennore Creek area feel it is Kamarajar Port Ltd (KPL) that poses the biggest threat. Formerly known as Ennore Port, the Kamarajar Port has now started constructing a concrete reinforced bund in the wetland region, which was earlier earmarked as a free trade and warehousing zone (FTWZ). 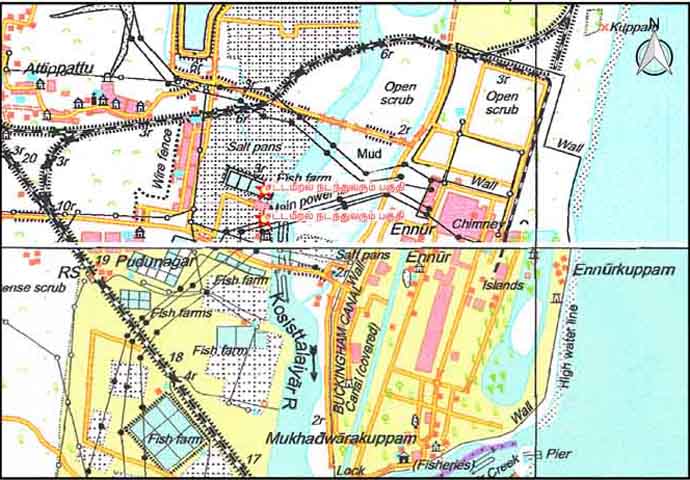 Location of FTWZ violation on areas earmarked as slat pans in Survey of India toposheet.

However, the location where this construction is taking place is a salt pan.

Salt pans are naturally forming open spaces in and around large water bodies. Such open spaces usually form after these water bodies dry up over thousands of year, leaving behind salt and other minerals. Salt pan lands have traditionally been no-development zones as they act as natural buffers during heavy rains and prevent flooding

This particular salt pan, where the Kamarajar Port has started building the bund, too acts as a buffer zone when the Ennore Creek overflows.

What's the construction for

Conservationists claim that the Kamarajar Port has started building the bund in the wetland region without obtaining any consent. According to environmentalist Pooja Kumar, "This area was earmarked as a FTWZ. But the authorities have not obtained any clearance. The only project that is pending for approval at the ministry level is Kamarajar Port’s masterplan."

The masterplan, however, does not consider the FTWZ as part of that project, claims Kumar. Even though multiple expansion plans have been presented for approval, none of them show the expansion plan of the FTWZ in them.

Since 2016, the port has reportedly floated various tenders inviting expression of interest to develop the FTWZ. But no one has come forward so far. As a result, Kamarajar Port is now trying to develop it independently.

Environmentalists contest that the FTWZ is part of the inter-tidal area of the Ennore Creek and is marked in the coastal zone management plan of Tamil Nadu. The 2010 Survey of India toposheet, too, marks them as salt pans, and "salt pans are wetlands".

The salt pan region that has been the point of discussion where the concrete structure is being built falls under Coastal Regulation Zone-1 (CRZ-1). (CRZ-1 pertains to places that are ecologically sensitive area between 0 and 100 metres to the shorelines or water body.) And to start work in these areas, one needs CRZ clearance from the environment ministry besides a consent under the Water (Prevention and Control of Pollution) Act from the state pollution control board.

Interestingly, in  2017, the Ministry of Environment and Forest tweaked the Wetland Rules, 2017 and "deleted" salt pans from the category of wetlands, opening them up for development. But soon a petition was filed in the Supreme Court in this regard. The decision to allow construction on salt pan lands is pending in the Supreme Court.

Also, in the case of salt pan lands in Kamarajar Port, this particular location comes under CRZ-1 due to its proximity to the Kosasthalaiyar river, and as such the Wetland Rules of 2017 won't be the primary law applicable to this region.

When asked about the construction in the ecologically sensitive zone, Muthuswamy, the revenue divisional officer (RDO) of Ponneri who is in-charge of Ennore and neighbouring regions, says initially a measurement needs to be carried out to ascertain if the region is a salt pan.

“The salt department while selling their land were well aware of the fact that the Kamarajar Port was going to carry out developmental work. And they have been saying that environmental clearance has been sought,” he said.

Muthuswamy repeatedly claimed: “If there are any illegal activities going on, give us a written complaint and we will investigate and ask them to come and show the records.”

Interestingly, the officer had no idea if KPL has received necessary permission. “They have said that clearance has been obtained, you will have to check with the KPL for further details.They will have to get clearance from the pollution control board as well. Our duty is to see if they have done any encroachment. It's either the KPL or the pollution control board officials who can confirm this,” says Muthuswamy.

KPL officials, however, did not respond to multiple requests for comment.

Dismissing Muthuswamy’s statement, environmentalist K Saravanan says, “There is a masterplan made by KPL, but this particular region has not been covered under the masterplan. This is being developed as a separate project. They are now trying to show that this region lies outside the CRZ. But that is not true.”

Meanwhile, residents of Ennore, who have been regularly raising concern over constructions taking place in the ecologically sensitive area, have upped the ante against the bund construction.

“Only six months back we protested by standing in knee-deep water against this. The collector, the RDO, the tahsildar had all promised that there won’t be any work carried out here. Yet the bund construction is going on illegally,” says RL Srinivasan, leader of the fishermen association in Ennore.

This particular location in question is part of the inter-tidal area of the Ennore Creek — which means when the creek expands due to tidal action or rainfall or other climate-related events, these salt pans act as buffers which withstand the water and let it stay there till the water evacuates through the mouth of the river into the Bay of Bengal.

“By building bunds and changing the natural course of that area, especially using concrete structures, the amount of water run-off will only increase. And since the concrete structures have the strength to redirect flood waters, this will only lead to the water running into villages in the low-lying areas,” explains Pooja Kumar.

Meanwhile, the fishermen complain that the mangroves in the region are being cleared for this bund construction. This has added to their woes since the fishing community already fears that encroachment of the region will hit the fish

population, which in turn will affect their livelihood.

Also, it is believed that a number of streams in the region will lose their natural course.

In 2015, Chennai, Tiruvallur, Kanchipuram and a few other districts of Tamil Nadu had witnessed massive flooding, which the CAG report termed as a man-made disaster. The report also blamed unrestrained encroachments which blocked free flow of flood water and said illegal constructions shrank water bodies leading to massive inundation.

It doesn't need a "masterplan" to understand the ravages of man-made disasters.

Today, it's Mumbai, tomorrow it could be Ennore — neck-deep in trouble.