In Left versus RSS war, Kannur violence is giving Kerala model of development a bad name

At the India Today South Conclave 2018, politicians of the southern state passionately differed from each other on who started the fire.

The southernmost state of India is also one of its most talked-about, and that too for diametrically opposite reasons. So at the India Today South Conclave 2018, now happening in Hyderabad, politicians from the left and right side of the ideological spectrum shared a dais to speak on the “blood on the streets” on Kerala, particularly the all-consuming turf-war between the Left and the RSS, mostly occurring in and around Kannur, chief minister Pinarayi Vijayan’s constituency.

Joining Rajdeep Sardesai, India Today TV’s consulting editor, were NDA’s Kerala vice-chairman Rajeev Chandrasekhar, CPI(M) Kollam secretary KN Balagopal, J Nandakumar of the RSS and Mathew Kuzhalnadan of the Kerala Congress. The session was titled, quite literally, “Blood on the Streets”, and the politicians passionately differed from each other on who actually started the fire.

Is #Kerala getting an unfortunate bad name? Listen in to panelists debate on "Blood on the street: Who's responsible?" with @sardesairajdeep at #SouthConclave18. Watch the event live at https://t.co/tj9yqTQNKX. pic.twitter.com/z0uouHrVa1

While Rajeev Chandrasekhar said there’s a political narrative of violence and intimidation that’s part and parcel of the Left culture in Kerala, he said that has long been the official strategy of the CPI(M) in the state. While recounting the political murders that have happened in the past few years, especially in 2016, Chandrasekhar said even if the culprits are booked, hardly any real action is taken against them.

Chandrasekhar pointed towards the state of Kerala economy and said private investment has been dipping since CPI(M) won the Assembly elections in 2016. He said the Rs 70,000 crore economy of Kerala has high deficit of Rs 14,000 crore and is entirely dependent on remittances for its survival. He recounted that businessmen have written to him saying the investment climate is worse than in the 1990s, and corporates fear the political violence of Kerala for not considering it as a go-to destination. 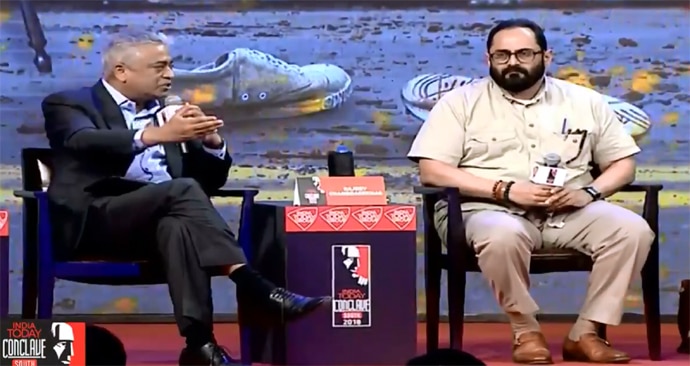 He also said that tourism has been going down, and Kerala is overseeing the shift of tourists to neighbouring Sri Lanka. He asserted that political violence is a great distraction technique to engage the youth in, since there are no jobs in Kerala to occupy the young and unemployed. He also said that putting a spotlight on the burning issues isn’t a case of trashing Kerala, and criticising the Left government doesn’t hurt Kerala’s image of being a high-achieving state with several awards and recognition in social indicators.

KN Balagopal, on the other hand, called this a “planned agenda” of the RSS, that of instigating violence and tarnishing the image of Kerala. He brought up the high-profile political cases, such as the death of judge Loya, as symptomatic of BJP’s murky record, and said this is a pattern beyond Kerala. Asserting that 60 per cent of the murdered cadres have been of CPI(M), he said the political violence affects CPI(M) as well, and it’s unfair to just blame the Left for what’s clearly a matter of RSS and Sangh instigation.

When Rajdeep Sardesai asked him if his party was “living in denial” about the culture of violence, Balagopal said the high crime rate of Kerala is actually an indicator of high law and order state, which even India Today had acknowledged by recognising Kerala with awards. Balagopal said even a small case would be registered in Kerala, unlike in Uttar Pradesh or Bihar. He also said there’s orchestrated violence by the RSS in Kerala, and in Kannur, the CM’s constituency, the RSS has been particularly proactive in initiating violence.

Balagopal said the government is acting on bringing the matter under control, but it’s an uphill task. While not naming sections of the media, but clearly hinting at the TV channel part-owened by his co-panelist Rajeev Chandrasekhar, Balagopal said the political killings have also felled sitting legislators, so it’s not limited to cadres alone. He said CM Vijayan’s government is aware of the situation, but Kannur violence shouldn’t be seen as the whole picture, when Kerala remains a high-achieving state overall.

Nandakumar of the All India Sah Prachar Pramukh of the RSS, said it’s not just a case of Kerala, but wherever CPI(M) has ruled, including in West Bengal and Tripura. He called it a case of “Left versus the rest”, saying even in 1948, MS Golwalkar was attacked in Kerala, so it’s not a recent phenomenon.

Adding to Chandrasekhar’s point about systemic violence of the Left, Nandakumar said BJP MP Meenakshi Lekhi had written about how BJP workers have been killed not just in Kerala, but also elsewhere.

When Sardesai questioned him on the insignificance that the BJP national president Amit Shah has in the politics of Kerala, how the local media didn’t attach any importance to him when he visited the state, even though Delhi media was engrossed in the story, Nandakumar said that he cannot talk about the BJP. But RSS has as many as 5,000 shakhas operating in the southern state, Nandakumar said, adding that CPM's politics of aggression and “targeted political murders” must be addressed.

When Sardesai asked why Mohan Bhagwat, the RSS chief, insisted on hoisting the flag in Kerala, Nandakumar said Bhagwat has all the right to hoist flag anywhere in India.

Mathew Kuzhalnadan of the Congress unit of Kerala, however, blamed both the Left and the RSS for the political violence in Kerala. While Sardesai pointed out that killings go down under Congress government and spike under Left rule, Kuzhalnadan said it’s unfortunate that the taint of violence sticks to Kerala even though it’s excelling at so many other fields.

Kuzhalnadan said both Left and RSS are anti-democratic and believe in dictatorships of either the proletariat or religious supremacy. He added this is not just an ideological war to control people’s minds, bodies, land and more, but this is the ideology of war. He said only Congress government acted against culprits of high-profile assassinations, such as of TP Chandrasekharan, who left CPI(M) to form his Revolutionary Marxist Party, but was butchered.

In the end, Sardesai summed it up saying the buck ultimately stops with the CPI(M) government to end the violence, while underlining that the Sangh and the BJP mustn’t in their desperation to wrest Kerala from the Left resort to violence.