The tax raids at Kanpur perfume businessman Piyush Jain's home has turned out to be India's biggest tax raids since Independence. Here's a quick glance.

The Chairman of Central Board of Indirect Taxes and Customs (CBIC) Vivek Johri called it the biggest tax raids in the history of the CBIC. Indeed, from what has been tumbling out of Kanpur perfume businessman Piyush Jain's home is nothing short of the next Ajay Devgn suspense thriller.

This Kanpur raid, conducted by 50 Goods and Services Tax (GST) officers from Uttar Pradesh and Gujarat units at the premises of Kanpur-based perfume businessman Piyush Jain, has turned out to be India's biggest since Independence. The sheer curiosity is making people rush to the premises to have a glance at the raids; and security in the area has been beefed up.

Here's what you need to know about the case:

1. WHAT HAS BEEN RECOVERED

The tax department has also found that Jain owned around 40 businesses; two of which are in the Middle East. The tax department has taken into use 19 cash counting machines from State Bank of India (SBI) to fully count the recovered cash. But wait. There was another cash counting machine that belonged to Piyush Jain (kinda fits in the scheme of things, given that Jain couldn't count Rs 195 crore manually...). 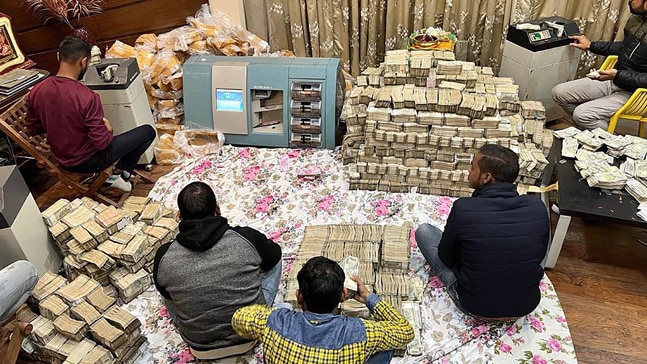 Cash seized by officials from the residence of Piyush Jain. Photo: PTI

Piyush Jain was arrested on December 26 by the central tax agencies on charges of tax evasion and was produced in court on December 27. Jain was interrogated for more than 50 hours before he was arrested. The tax agency might also take him to Ahmedabad from Kanpur for further investigation.

“Piyush Jain has accepted that the cash recovered from the residential premises is related to sale of goods without payment of GST. In view of the overwhelming evidence available on record indicating large scale evasion of GST by Odochem Industries, Kannauj, Piyush Jain was arrested on December 26, 2021 for commission of offences prescribed under Section 132 of the CGST Act and was produced before the competent court on December 27, 2021,” the statement said.

Jain has been sent to judicial custody for 14 days. The money seized is said to be from goods dispatched through fake invoices and without eway bills by transporter. 3. HOW JAIN WAS TRACKED It was known that Odochem Industries, where Jain is a partner, supplied perfumery compounds to Shikhar Pan Masala in Kanpur. Based on an intelligence input, the special unit of DGCI conducted search operations at Shikhar Pan Masala, the office and godowns of Ganpati Road Carriers in Kanpur, and the residential and factory premises of Odochem Industries in Kannauj and Kanpur.

The tax officials, as per inputs, intercepted four trucks run by Ganpati Road Carriers. The trucks were carrying pan masala and tobacco and without payment of GST. The officials then went to the factory and tallied the goods and amount on paper with what was available in the factory, and it is here that they found a huge shortage of raw materials and finished products.

“This further corroborated the fact that the manufacturer was indulging in clandestine removal of goods with the help of a transporter who used to issue fake invoices to manage the transportation of said goods,” a statement by DGGI’s Additional Director General Vivek Prasad read.

More than 200 fake invoces were recovered by the tax officials. Also, the manufacturers of Shikhar Pan Masala also admitted their tax liability and paid Rs 3.09 crore as their tax charges.

As per sources, Jain believed in no showing off, mostly to keep tax sleuths from sniffing out his wealth. Piyush Jain would ride a scooter, and he owned only two cars, a Toyota Qualis and Maruti, parked at his home in Kanpur. To evade the tax sleuths, he would use old cars and minimal security.

Also at his bungalow in Anandpuri in Kanpur, Jain had employed two watchmen on Rs 7,500 per month salary. The guards were not allowed to go inside the house.

The perfume tycoon has a bungalow in Mumbai where he has his head office, and a house in Kannauj. But local perfume dealers have refuted his claim of being in the perfume business while some people have said he also runs a chemist business.

One wonders why a political party has been dragged into this tax raid. Well, BJP spokesperson Sambit Patra took to Twitter on December 24 to say that Piyush Jain was the one who launched the Samajwadi Perfume, originally called Attar Nagri, in November this year in Kannauj in the presence of former Uttar Pradesh Chief Minister Akhilesh Yadav.

Interestingly, Kannauj is Samajwadi Party’s stronghold, and has previously been represented in the Lok Sabha by Akhilesh Yadav and also his wife Dimple Yadav.

The Samajwadi Party has denied all links to Piyush Jain.

#Kanpur businessman raids, #Kanpur piyush jain, #Piyush jain raid, #Kanpurraids
The views and opinions expressed in this article are those of the authors and do not necessarily reflect the official policy or position of DailyO.in or the India Today Group. The writers are solely responsible for any claims arising out of the contents of this article.