This was the first reported 'racial bias-motivated' fatality after Donald Trump became US President.

The first victim of US president Donald Trump’s ban on immigrants is not a Muslim from the Arab world, but an Indian Hindu.

Srinivas Kuchibhotla, 32, an engineer from Hyderabad, was with his friend at a bar in Kansas when a man allegedly yelled "get out of my country" before shooting at them. Kuchibhotla was killed, while his friend, Alok Madasani, survived. A witness who tried to intervene, Ian Grillot, was shot, but is expected to survive the attack, according to an NDTV report.

According to the Hindu American Foundation, “The murder of Kuchibhotla is the first reported bias-motivated fatality in the United States after the bitter presidential election.” 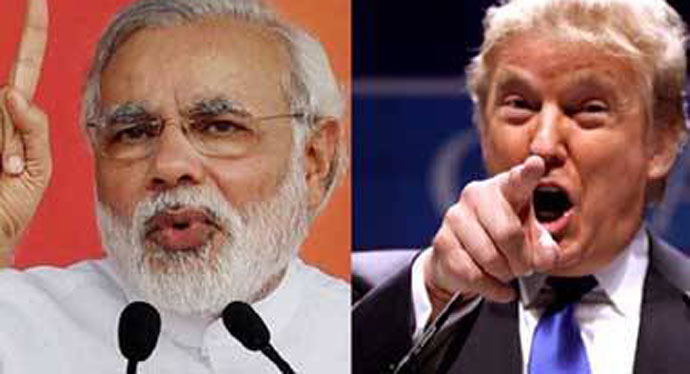 After Trump's election, Modi said there was no reason to apprehend any dramatic change in the bilateral relations.

Foreign minister Sushma Swaraj tweeted "I am shocked" and said she has promised assistance to Kuchibhotla's family, including helping bring the 32-year-old's body back to Hyderabad.

While the incident may have left the minister and her cabinet colleagues, including the prime minister, shocked, this is exactly what the liberals were fearing when they cried hoarse over Trump's travel ban on immigrants.

The assailants words "get out of my country" has brought into focus the debate that Trump’s Muslim ban wasn't just about Muslims, but a much more terrifying  truth about the grave danger that politics of hatred poses.

Numerous incidents of hate crime post-9/11 in America had proved that racists cannot tell the difference between Muslims, Sikhs, Hindus or anyone "foreign". Despite that many Hindu-Americans rallied behind Trump with yagnas and pujas in the run-up to the US presidential polls.

Trump became the preferred presidential candidate of a huge chunk of the Hindu-Americans with prominent members of the diaspora emerging as his financial backers. Republican Hindu Coalition (RHC) founder and Chicago-based businessman Shalabh “Shalli” Kumar donated at least $2 million to Republicans running for office in 2016, while his coalition raised millions in campaign cash for GOP candidates.

Many Hindu-Americans even identified with and justified Trump's call to build a wall on the US-Mexico border because of similar proposals by nationalists back home to build a wall along the India-Bangladesh border.

But most importantly it was Trump's tough words for Pakistan that won the Hindus hearts.

Back in Kuchibhotla's India as well, Trump lovers supported him mainly because of his Islamophobia in the name of “humanity against terrorism”. It's was Trump’s anti-Islamic rhetoric and pro-Hindu statements that filled Indian "hyper-nationalists" with the hope of a revolution that would see the overthrow of "Islamic terrorism" (read Muslims).

While most global leaders, including Americans, have openly criticised Trump’s politics of hatred and policies, the Indian government didn't express a single word of concern. Prime Minister Narendra Modi, on the contrary, believed the Republican administration will be well inclined towards India.

After Trump's election, Modi said there was no reason to apprehend any dramatic change in the bilateral relations. He even compared himself with Trump, saying that he too was an "outsider" in the 2014 Lok Sabha polls.

Everyone living in present-day India knows how the country experienced a dramatic shift in patriotic sentiment post-2014 Lok Sabha polls. The entire political discourse changed and is now characterised by the national flag, the national anthem, the dying soldier and a nationalist government, which believes surgical strikes to be the ultimate solution to all that ails the country — from black money (demonetisation) to cross-border terrorism.

While it's time India takes a stand (it's foreign policy cannot be restricted to mere Twitter diplomacy and nationalistic cries), Indians too must understand that Srinivas Kuchibhotla was a victim of the same "politics of patriotism" in the US that's playing out in India. More importantly, it should be a wake up call to NRIs who voted for a president who has risen on the foundations of bigotry and hate.