The court allowed BJP's Yeddyurappa to take oath as CM, but conditions apply.

For the second time within 24 hours, the Supreme Court has been dragged into the process of government formation in Karnataka. The Congress-JD(S) alliance has challenged governor Vajubhai Vala’s decision to appoint an Anglo-Indian MLA to the Assembly in the midst of the ongoing uncertainties.

While BJP’s BS Yeddyurappa took oath as chief minister on the morning of May 17, his fate lies in the hands of the apex court, which has asked that the two letters the BJP sent to the governor, on the basis of which it was invited to form the government, be produced in court on May 18. BJP’s BS Yeddyurappa took oath as chief minister on the morning of May 17. Photo: PTI

The BJP has 104 seats in the current 222-member Karnataka Assembly, eight short of a simple majority. The Congress-JD(S) alliance, cobbled up as vote counting was underway, has 116 seats. The BJP was given 15 days to prove a majority by the Governor, and thus, the vote of every MLA counts. It is pertinent to mention here that Karnataka Assembly has an actual strength of 224 MLAs, but the election in two constituencies, Rajrajeshwari Nagar and Lottegollahalli, was postponed. The Election Commission took the decision after 9,746 voter ID cards were seized from a flat in Rajarajeshwari Nagar, and Lottegollahalli reported EVM failure.

The Constitution gives the governor the power to nominate one Anglo-Indian member to the Assembly if he feels they are not adequately represented, and Vala has used his discretion rather promptly.

The court’s decision to allow Yeddyurappa’s swearing-in to continue, but keep his chief ministership conditional, has evoked mixed reactions from lawyers. Here are some lawyers breaking down the order:

Lawyer Saif Mahmood, who was part of the JD(S)-Congress’ legal team headed by Abhishek Manu Singhvi, explained on Facebook:

“The court has said we are not staying the swearing-in but we are making it clear that it will remain subject to our further orders on Friday. Yeddyurappa has written two letters to the governor staking claim. It is understood that in neither of the two letters has he claimed that his party (which has won only 104 seats) crosses the minimum threshold of 112 seats.”

“The Congress-JD(S) alliance has, on the other hand, given a letter to the governor with the signatures of the post-poll alliance members who are 118 in number, well above the minimum threshold. The court wanted to know how, in the face of this simple arithmetic, did the governor call Yedyurappa with only 104 seats as against Congress-JD(S) which has 118 seats. These letters were not on record (we don't have them) and Yedyurappa was not represented (even though two of his supporter MLAs — not party to our petition — insited on being heard and were fully heard without being parties).”

“AG didn't have the letters either. Therefore, the matter was kept for 10.30 am on Friday and AG was directed to produce those letters from the governor's record. Court made it clear that swearing in is not being interdicted because court has powers to restore status quo ante and it is, therefore, being made subject to further orders on Friday after seeing the letter. Now one only hopes that the original/genuine letters are produced.

Senior lawyer Ram Jethmalani, who was once a BJP member, has moved the SC independently against the Karnataka governor’s decision. He has said: “This is not horse racing, this is donkey racing. Open invitation to corruption... They can only get votes by destroying democracy… I have one objective left, to get rid of Modi. I have not lost faith in the Supreme Court.” 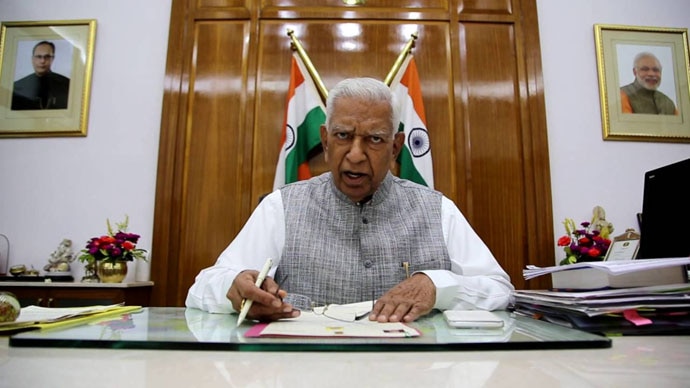 The Congress-JD(S) alliance has moved court against two of governor Vajubhai Vala's decisions.

Lawyer and legal expert, Gautam Bhatia, has raised questions on the order:

“So, can someone explain these two things to me about yesterday's 2am hearing in Court 6:

1. There are three Supreme Court orders waxing eloquent about how a floor test is the *only* method for resolving a contentious situation of this kind, and advancing deadlines to order a floor test to be conducted within 48 hours (the most recent example is Goa). Once the SC had decided that the swearing-in was going to go ahead, why didn't it order the floor test by end of day's play on Friday? The SC's refusal to do so means that even if it orders one during the Friday hearing, the earliest it can realistically take place is Monday. Resiling from a previous, consistently held position when the stakes are at their absolute highest is not a good look. It also suggests that the whole rhetoric over floor tests is more a constitutionalism of convenience than one of principle.

2. If the heart of the dispute was the content of the letter that BSY wrote to the governor, then why has the SC given 30 hours to produce it? You open the Court at 2am because the case is that urgent (more on that later), and then after a four hour hearing, you "issue notice and list on Friday"? Are we actually saying that the governor needs the benefit of a day and a night to produce the letter? If ever there was a case that was the definition of time-sensitive, it was this one — fix it at 10.30am, or even 2pm today to examine this letter. Why Friday?”

As fresh twists and turns emerge in the Karnataka tale every hour, it is to be hoped that the court hearings will bring clarity on what steps the governor should take in case of a hung Assembly.