The Karnataka High Court’s statement on marital rape is winning the hearts of many. But the statement neither punishes the perpetrator nor strikes down the dangerous exception of law.

The Karnataka High Court’s judgment in a marital rape case on March 23, 2022, was well received and touted to be progressive. The single-judge bench of Justice M Nagaprasanna said, “A man is a man; an act is an act; rape is a rape, be it performed by a man the ‘husband’ on the woman ‘wife’.” 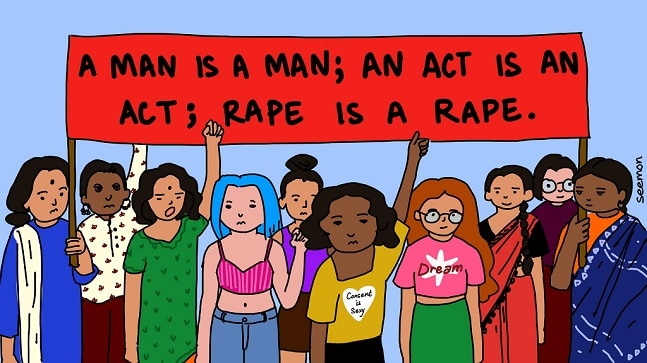 The court refused to quash the case of marital rape against the man, in this case, the husband of the woman, and forced him to face trial. The case had reached the High Court after a trial court took cognizance of the offense under Section 376, which is rape.

India is among some 30 countries in the world that in the 21st century doesn’t see rape in marriages as a crime. In most other 150 countries, marital rape is criminalised. IPC Section 375 that defines rape also outlines a crucial exemption. It says, “Sexual intercourse or sexual acts by a man with his own wife, the wife not being under eighteen years of age, is not rape.”

This means that a ‘no’ is not a ‘no’ or is void in marriages. A man can force his wife into sexual intercourse even without her consent. It is also a form of domestic violence with far more consequences that is not legally recognised or criminalised. A man can unleash violence through sexual intercourse, physically hurting the woman. But nonetheless, it is still not a crime in India as long as the duo is married.

And hence the judgment of the Karnataka High Court was praised. However, the judgment doesn’t mean that the husband will be punished or that the order can be used in future such cases to shape the verdict. The court did not explicitly strike down the marital rape exception as defined under IPC Section 375. An appeal by the accused in a higher court is likely to quash all charges, especially that of rape, against the man.

The marital rape exception did not apply there. To say that it doesn't apply because of the brutality & peculiarity of the rape follows the same logic. The exception to penalising marital rape cannot mean to protect such brutal acts of rape, under the law and the Constitution. pic.twitter.com/Ed7m41oncC

Moreover, the single judge bench referred to the case as that of a specific one, where the man kept his wife as a sex slave and committed brutal acts of sexual violence against her, making it difficult to be replicated in other cases of marital rape.

Over the years, different High Courts have held different views and stands on the issue. In 2021, the Kerala High Court granted a divorce on the grounds of marital rape, but again it wasn’t used to punish the perpetrator.

The exception is archaic and regressive. But the government of India has still not woken up to the horrors being meted out on half of the population. And it will take more than a well-put High Court statement to bring an end to the violence.