Any great republic needs to be progressive. Else, it runs the risk of ceasing to be great or even a democracy. The upcoming municipal and panchayat election in Jammu and Kashmir (J&K), to be held in nine phases between October 8 and December 11, is one such step and is slated to have historic significance.

Besides re-establishing long overdue grassroots-level democracy in the state, the polls would also witness residents being sanctioned with authority to address a host of local issues that affect them the most. The last time the state witnessed urban local body and panchayat elections, in 2005 and 2011, respectively, the world was a very different place. The regular people in the state, who up until now, had been mere spectators to a sea of changes across the rest of the country, would finally experience the same devolution of power that has transformed the lives of millions of their fellow countrymen. A lot of water has flown across the Dal since 2011. It’s time ordinary citizens control the tide. (Source: Twitter)

Home minister Rajnath Singh in a statement on September 28 reiterated the central government’s commitment to see that the tenets of democracy cover the final mile in Jammu and Kashmir. Outlining the magnitude of change the polls would usher in, the minister said the Centre would deploy sufficient numbers of central forces to assist the state in ensuring smooth conduct of the elections. There is no denying that these elections are, in fact, epoch-making and promise to lay the foundation of a bottom-up approach to development that would truly empower the common residents of J&K. One of the most important outcomes of these elections would be the restoration of the provision of direct elections for the sarpanches of villages, which, besides ensuring accountability, would also enable them to address the issues in their jurisdiction. The home minister tweeted how these elections will also pave the way for making available nearly Rs 4,335 crore of central grants under the 14th Finance Commission to the duly constituted local bodies. Had it not been for these elections, the people of the state would continue to be deprived of the funds. More power to the people and panchayats of Kashmir. (Source: Reuters)

Abraham Lincoln had famously pointed out that the ballot is stronger than the bullet. The upcoming J&K polls could be testimony to precisely that. Just how big the role of the local resident would be in the running of the state can be measured from the fact that after these elections, the functioning of the subjects under the 73rd Amendment of the Constitution of India, that includes institutions such as primary health centres, primary schools, anganwadi centres et al, like most Indian states, would finally be given to the panchayats.

This is one of the biggest steps towards making the common Kashmiri a partner in running the state, which oddly enough, is not something that the two major local political parties — the National Conference (NC) and the Jammu and Kashmir Peoples Democratic Party (PDP) — seem to want. How else does one explain their decision to boycott the polls because of the central government's stand on Article 35A, which grants special privileges to residents of J&K? Are Kashmir’s top netas so threatened by the thought of elections? (Source: PTI)

In the past, both the NC and the PDP have sought greater autonomy for the state. Such calls have often been shrouded in the veil of instilling in the aam Kashmiri a greater sense of pride in being like any other Indian, participating in a real decision-making process. Yet, the two parties don’t want to be participants in a process that allows a true transfer of power to its electorate. Even the Congress, which had previously expressed doubts, is going to take part in the elections.

These polls would localise many things at the most basic level. The panchayats would have the power to generate their own funds after the new sarpanches are elected. This would include building permission fee, taxes on entertainment, advertisement, hoardings, various kinds of businesses and professions. The local representatives would also be responsible for the implementation of national schemes and their coffers would be supplemented by both central and state government funds for MGNERGA, Pradhan Mantri Awas Yojana, ICDS, midday meals, etc. The degree of autonomy for local councils, such as the Leh and Kargil Autonomous Hill Development Councils (LAHDC and KAHDC), would be strengthened as well and they would have the go-ahead to address local issues. 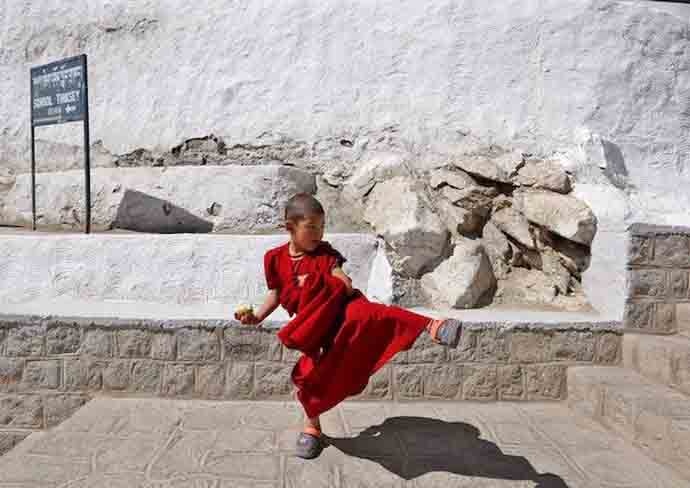 India's elections are a celebration — and everyone’s invited. (Source: Reuters)

Despite so much being at stake, most national media organisations have either underplayed or ignored the extent of the influence the J&K residents could wield because of these elections.

For the big political parties, could the elections mean a loosening of the traditional stronghold in more ways than one?

The financial powers of a standard panchayat increasing over ten times, from Rs 10,000 to Rs 1 lakh block councils getting Rs 2.5 lakh instead of Rs 25000, and the chief executive councillors being chairman of all Tourism Development Authorities, are more than mere indicators of power trickling down. A thriving tourism needs a safe state and when you have the grassroots playing a role in revenue generation, the concern for safety reaches the doorsteps of each and every home across the towns and villages. The common folks will become initiators of the peace process — and also help deradicalise youth and curtail Pakistan-sponsored propaganda that has been a menace in Jammu and Kashmir for far too long. One can only join the dots and come to a conclusion that voting makes all the difference. To quote Lincoln once again, "If given the truth, people can be depended upon to meet any national crisis."

Many people of Jammu & Kashmir have been stopped from voting because of militant guns so far, and now their so-called representatives in key local political parties have decided to keep away. The facts can no longer be hidden from the people who have a stake in Kashmir, and by extension, India.

It’s time that they chose their destiny with their eyes open.

Also read: Why the upcoming Jammu and Kashmir municipal and panchayat polls need to be called off