Why saffron farmers of Kashmir are hopeful of prosperous times

The famed Kashmiri saffron has been granted the Geographical Indication (GI) tag, symbolising its exclusivity in the international market.

In the Covid season of desolation, saffron farmers in Kashmir are thrilled and are looking forward to higher incomes later this year. The famed Kashmiri saffron has been granted the Geographical Indication (GI) tag, symbolising its exclusivity in the international market.

The GI tagging is the last hope of Kashmir’s saffron farmers. Zafraan, as the prized spice is called locally, is popular for its aroma, flavour, and colour worldwide. Despite this, Kashmiri saffron suffered tremendously following the global invasion of the cheaper Iranian saffron. Iran is currently the largest producer of saffron in the world, cultivating over 300 tonnes every year on 30,000 hectares of land. In Kashmir, which ranks second in supply, saffron cultivation is limited to about one-eighth that area – at only about 3,715 hectares. 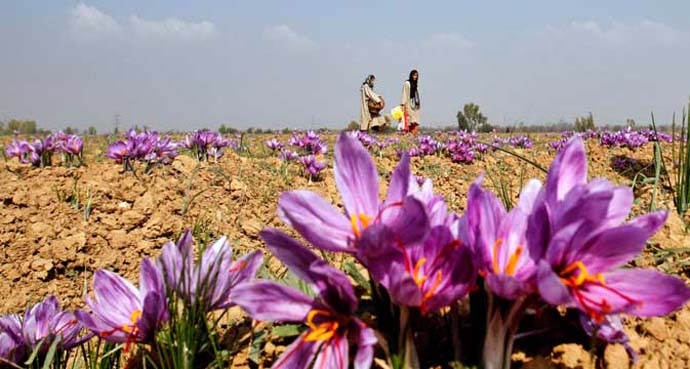 Zafraan, as the prized spice is called locally in Kashmir, is popular for its aroma, flavour, and colour worldwide. (Photo: Reuters)

The cultivable land dedicated to saffron has declined by 65 per cent in Kashmir in about two decades. The price of Kashmiri zafraan fell by 48 per cent after 2007 when Iranian imports grew substantially. Hit by low profit, Kashmir’s saffron farming shrunk. Farmers were unable to command a high price for their produce within India and also globally.

The All J&K Saffron Growers Development Cooperative Marketing Association says the major challenge is that common consumers are unable to spot the qualitative difference between different varieties. Iranian saffron is sold in markets branded as Kashmiri saffron. The GI tag will give Kashmiri saffron the required exclusivity and brand push in the global market.

Altaf Aijaz Andrabi, director, Department of Agriculture, Kashmir, said the farmers are elated that the GI tag shall enable them to expand their business globally and enable their produce to command the price that it deserves. The GI tagging has come following sustained efforts by the Department of Agriculture and also the local farmers to seek this exclusive branding. Kashmir has been granted a Certificate of Registration for GI tagging by Registrar of Geographical Indication, Chennai, and the Government of India in respect of Kashmiri saffron for Pulwama, Budgam, Srinagar and Kishtwar districts.

Kashmiri saffron has been in demand for centuries on account of its antioxidant properties. It is considered the highest quality of saffron worldwide because of the higher concentration of crocin, a carotenoid pigment that gives saffron its colour and medicinal value. While the crocin content of the Iranian saffron is 6.82 per cent, the crocin content of Kashmiri saffron is 8.72 per cent. This gives the Kashmir zafraan a dark colour and enhanced medicinal value. The process of converting crocus flowers into the thread-like spice is arduous and labour-intensive: it takes around 1,60,000 flowers to yield a kilogram of saffron. A research paper published by the International Journal of Farming and Allied Sciences (IJFAS) stated that Kashmiri saffron is recognisable by its dark maroon-purple hue; it is among the world's darkest, which hints at strong flavour, aroma and colouring effect.

A large number of families that have been involved in the cultivation of saffron for centuries chose to leave this work after Iranian saffron made business unviable. Farmers who earlier sold saffron at the rate of Rs 2.5 lakh per kg suddenly found prices dipping to Rs 1 lakh per kg as Iranian saffron swamped the market. As profits dipped, farmers started moving out of cultivation. Those farmers, whose farms were close to the national highway, chose to construct shops on their land and rent them.

Saffron farming is painstaking and arduous. The purple-hued flowers are harvested in autumn. They are carefully plucked and the crimson stigma is removed. It is dried for days till it shrivels and looks like a thread, weighing about 2 mg. A flower usually has three stigmata. Yet, the crop is so bountiful that according to the Agriculture Department, Kashmir produces about 15 metric tonnes of saffron. As profits shrank after 2007, farmers turned saffron farms into apple orchards or took to other vocations.

The conversion of saffron farms into other kinds of commercial activity stopped after the J&K government introduced the Saffron Act of 2007. The Act prohibited the conversion of saffron farms to commercial plots. Violators were fined a penalty of Rs 10,000 and one-year imprisonment. The Agriculture Department is hopeful that with the GI tag, the families involved in saffron farming shall prosper. They are hopeful that this will give a further boost to saffron cultivation in the Valley.

Also read: How misinformation and rumours made Russian poplar trees surprise victims of Covid-19 in Kashmir