A group of men - they call themselves lawyers - on April 9 attempted to prevent the police in Kathua from presenting before the local court a chargesheet in the gang-rape and murder of an eight-year-old Bakarwal girl.

After the police went ahead and filed the chargesheet, on April 11, the men, under the umbrella of the Jammu High Court Bar Association (JHBA), called for a bandh in the Jammu region. Such brazen shamelessness has so far been unheard of in independent India.

The lawyers' complaint is that the police probe, which forms the basis of the chargesheet, is biased and the case needs a Central Bureau of Investigation probe.

Claiming mass support to the call for a strike, JHBA said more than two dozen social, religious and political groups besides commercial transport and tanker unions have pledged allegiance. JHBA's demands and its audacity to give a communal colour to a heinous crime like rape requires not just condemnation but stringent punishment to serve as an example for those who use religion as a tool to divide. The police have filed an FIR against the lawyers for attempting to prevent officials from performing their duty.

But JHBA has been emboldened on a cue from the party that forms the government at the Centre and is a coalition partner of the Jammu and Kashmir government. A party that gave hope that days of crimes committed against women with complete impunity were over by selling to us the slogan of "Beti Padhao, Beti Bachao".

This eight-year-old child, whose tender body was violated by three men repeatedly for four days before she was smothered and hit on the head by a stone, because the community she belonged to had to be taught a lesson, is not "India's beti". This sends out such a chilling message to the many, many young girls who are born in India, because a section is now brazenly telling us that they deserve to be disowned. This is majoritarian assertion at its lowest, cheapest and scariest.

An 8 year old child is drugged and held captive in a temple for 3 days. Brutally gang-raped to the extent her uterus is damaged. Then strangulated to death and body is thrown in a ditch.Why is this child not India's daughter??#Kathua

It is important to understand how the case led to communal polarisation or is being used deliberately and nefariously to widen the existing wedge between the Bakarwal Muslim community, to which the victim belonged, and the Hindus in Kathua, some of whom carried out the crime. Many others are complicit in this rape and murder by trying to defend the rapists and murderers because they are Hindus.

Bakarwals are Muslims who spend the winter in Jammu and migrate to Kashmir for the summer. For the past few years, tensions have been worsening between the tribes and local Hindus, who claim they are buying land and settling here, which might “change the demography of the region”.

The girl was reportedly killed on January 14, four days after being abducted and raped repeatedly. Her body was recovered on January 17, from the forest of the Rasana village - mutilated and rotting. The post-mortem report showed damage to private parts as well as injuries to her uterus due to sexual assault.

The subsequent arrest of the accused triggered demonstrations in Kathua and neighbouring areas, amid claims that the investigation was unfair and demands for a CBI investigation. The accused included Sanjhi Ram, a former revenue official and local strongman, Ram's son Vishal Kumar, a college student, police officer Deepak Khajuria, Ram's 16-year-old nephew, and his friend Parvesh Kumar.

The protests were led by a group called "Hindu Ekta Manch" and backed by BJP leaders Lal Singh Chaudhary and Chander Prakash Ganga. Interestingly, both Chaudhary and Ganga are ministers in the state's PDP-BJP government.

So, the two BJP ministers in the J&K government fuelled protests against the investigation carried out by the police department, which ironically reports to the state government.

The Hindu Ekta Manch is led by Kant Kumar, former sarpanch of Kootah. Kumar has claimed to be in possession of definitive evidence to prove the investigations were unfair. So the manch and BJP leaders should ensure that the case reaches court and present this "definitive evidence" before it for a fair trial. But they will not do so because fair trials can't be turned into political tools to divide Hindus and Muslims, men and women, children and children.

The protests, which began February, demanded that special police officer Khajuria be released, dubbing his arrest "jihad". By using words such as jihad that have over a period of time assumed politically and religiously charged connotations, the job of fuelling tempers and passions is made easier. 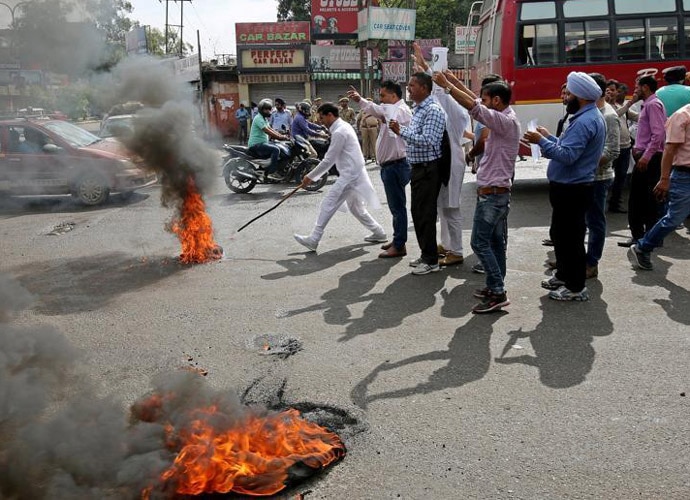 Protesters shout slogans in Jammu, demanding a CBI probe into the rape and murder of an eight-year-old girl in Kathua.

Local media outlets had in February reported that the protesters included BJP leaders such as Rashpal Sharma, vice-chairman of Jammu and Kashmir State Advisory Board for Welfare and Development of the Other Backward Classes in August 2016, and Hira Nagar MLA Kuldeep Varma. Some Congress leaders, too, were reportedly part of the protests and associated with the Hindu Ekta Manch.

While tragedies like the Kathua gang-rape and murder are known to shake the conscience of our nation, they also call for condemnation from the highest offices. But a call for Prime Minister Narendra Modi to comment on any issue worth its salt has only met with silence since he assumed office in 2014.

In this case, however, even Congress president Rahul Gandhi, who is busy proving his "Hindu credentials" these days, is yet to raise his voice or tweet.

The lawyers batting for the accused, those supporting them and their political masters from whom the hoodlums are drawing their strength must tell us how do you assign a religion to an eight-year-old child. If the body had not been identified, how would the Hindu Ekta Manch have told this country whether the child was Hindu or Muslim?

They must also tell the women of this country if justice for victims of rapes and molestations depends on religious affiliations.

It is time the entire country, especially women, speak in one voice against this atrocity suffered by a child. Because this united voice will help in reassuring other children that they are safe here, that we will not let anybody play politics over them or their bodies. As for the Kathua victim, if only we could say sorry to the dead.