#Kedarnath poster is out: How long will Bollywood's men carry their lady loves on their back!

When DDLJ was released, Sara Ali Khan was two years old. She is 25 today. So, what's changed in Bollywood? Not much!

A Bollywood actress is supposed to be petite (unless the character demands otherwise) for various reasons.

One of them, and the most important of them, is to allow the heroine to be lifted easily by her on-screen saviour on his back from the deepest of miseries.

The Sara Ali Khan-starrer Kedarnath is a much-awaited movie — not only because this would be Sara’s debut in Bollywood, and she would obviously remind us of her mother Amrita Singh, but also because the movie has been in the pipeline for a long time.

Though there is apparently no nepotism in the industry, it was reported that her father Saif Ali Khan was quite upset about his daughter’s debut going slowly from pillar to post.

Then, the first look of the movie arrives.

It is going to be released on December 7. The burden good Bollywood men have to carry! (Photo: Instagram)

Apart from Amrita Singh, what we are reminded of is the poster of Dilwale Dulhaniya Le Jayenge (1995) — as both the posters have the leading lad carrying the lady on their back.

In DDLJ, it was Shah Rukh Khan, carrying bride Kajol, as the name of the film suggests.

In Kedarnath, it is Sushant Singh Rajput, carrying pilgrim Sara Ali Khan, as the underlying message of the film ('love is a pilgrimage') suggests.

Well, Sara was two years old when DDLJ was released. She must have been thrilled to do a Kajol-like entry in her debut. But Bollywood has nothing to be thrilled about if it still has to carry its star kids/leading ladies on its back.

Mansoor in Kedarnath is, of course, not like DDLJ’s Raj who was confident of sweeping his lady love right off her feet.

Apparently, Mansoor is a porter who carries pilgrims to the Kedarnath temple. Sara Ali Khan’s Mukku is a pilgrim who displays all the possibilities of changing Mansoor’s life, the moment they meet.

Both of them must have been caught amid the wrath of nature, like the 2013 Uttarakhand flood — which killed over a couple of thousand people.

But love will triumph over everything, because that’s how it happens. 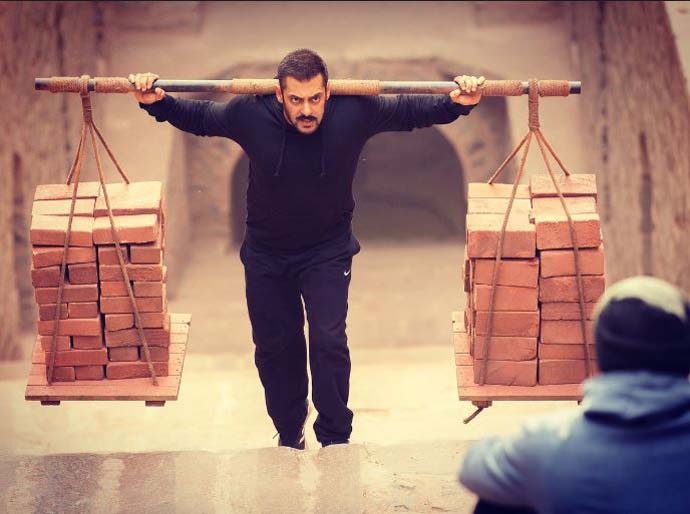 And the poster of the film carries happiness in it — in the bright blue background, in the firmness of a strong Mansoor’s grip, and in the dreamy eyes of Mukku riding on the back of Mansoor. (So that they can be lifted easily). (Photo: Instagram)

Does just a poster of a yet-to-be-released film deserve so much criticism?

Yes, because Bollywood is like this. Even when it envisions a poster of a film, even when it goes to meet PM Narendra Modi to discuss how the entertainment industry can contribute more towards nation-building.

and not one woman in sight! #lol #Patriarchy #stronghold https://t.co/iuGY1EpDBC

Dear leading ladies, no matter how many deadlifts you can perform in the gym, save those photos for Instagram.

Instead, wait for the screen men to lift both you, and your spirit, respectively.

#Sara ali khan, #Nepotism, #Kedarnath, #Patriarchy
The views and opinions expressed in this article are those of the authors and do not necessarily reflect the official policy or position of DailyO.in or the India Today Group. The writers are solely responsible for any claims arising out of the contents of this article.