Kerala is no dog's own country

Mass culling, beating to them pulp, carcass tied to a pole - is this India's most literate state's idea of tackling stray canines?

For a state that boasts of the highest literacy rate in the country, Kerala’s citizens behave like complete savages when it comes to stray dogs. Cases of abuse against stray dogs (among other animals) have been reported way too many times when it comes to Kerala. The most recent, in a series of “what the fu*k” worthy news from the state, is one where it was announced that killing stray dogs would be rewarded with gold coins.

According to a PTI report, the Old Students Welfare Association of Pala-based St Thomas College said it will give gold coins to the civic authorities that kill the maximum number of stray dogs till December 10 in Kerala.

“We are planning to give the gift to panchayat presidents and municipality chairmen in the state who lead in killing maximum number of stray dogs. Our aim is to ensure the safety of people from violent canines,” James Pambaykkal, association general secretary, told PTI. Kerala has been unusually cruel towards stray dogs. Photo: Indiatoday.in

Reportedly, four people have lost their lives and 701 others (that includes 175 children) have been injured in canine attacks alone in the last four months, across the state. According to the same report, nearly 53,000 people were treated for dog bites in government clinics, this year alone.

Stray dogs attacking people may of course be a legitimate problem and a cause of concern, but Kerala, instead of actually tackling the problem, resorts to barbaric practices. Last Thursday, residents of a Kerala town killed 40 stray dogs after a 90-year-old man was mauled to death by a pack of canines.

In another heinous incident last month, the workers of Youth Front (Mani) party killed 10 dogs and paraded their carcasses on the streets of Kottayam. This mass-culling of strays was triggered by the death of 65-year-old woman in the outskirts of Thiruvananthapuram, who too was attacked by a pack of streetside dogs. 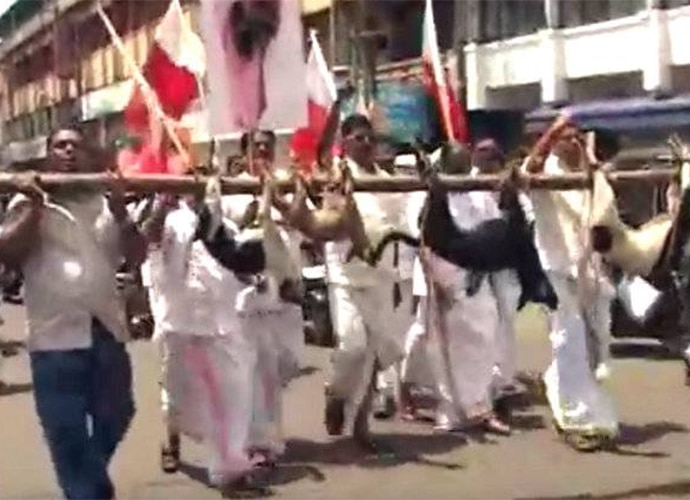 After beating the dogs to death, the angry workers tied the carcasses to a wooden pole and took to the streets while shouting slogans against Maneka Gandhi and the state government for not being able to control the “menace” that is street dogs in Kerala.

The abysmal figures only begin to unravel the extent of cruelty meted out to canines in India's most literate state. Exactly as political violence and face-offs between CPIM and the RSS/BJP cadres reaches a crescendo in Kerala, abusing hapless animals also peaked, almost as a side-effect of the general vitiated atmosphere that's poisoning the state from within. Reports of cadres being hacked to death interspersed with stray dogs being eviscerated and put out on display from wooden poles do not hide the sheer coincidence of brutality practiced in Kerala at present.

What is going on?

But incidents of such brutality are hardly limited to the streets. In a horrific, yet not entirely shocking incident, people broke into a house to kill a sheltered pup. Geetha, a native of the Malappuram district in Kerala woke up to find her six-month-old puppy dead and being eaten by ants, its hand broken, eyes bulged out and stomach bloated.

How was a six-month-old pup a hazard and a threat to the well being of ordinary Keralites? Does civic sense not extend to being nice to our animal friends, who share with us our habitat?

Even children are not being spared from witnessing this grotesque display of violence against animals. On October 6, around 150 dogs were allegedly killed in the locality and displayed in front of a school for the students to see.

The situation in the state has become so dire that the Union minister of child development, Maneka Gandhi, a known activist of animal rights, said “Kerala has been killing stray dogs for more than 60 years. What has it achieved? No other state in the country mercilessly kills stray dogs in this manner.”

"I have warned the Kerala government more than 100 times. The law does not permit killing of stray dogs. But they never listen to me. I would want to request them to sterilise all stray dogs in the state at the earliest. Animal birth control programme in Kerala is not happening in the right manner. Only one district in the state followed it strictly, and there has been no stray dog bites in that district", added Gandhi. Former Thiruvananthapuram district collector, Biju Prabhakar has spoken against the sterilisation of stray dogs, claiming it to be a ploy of the "anti-rabies vaccine lobby" to make more money. He is of the staunch opinion that stray dogs need to be culled and not sterilised.

“Why is there a selective love for dogs? The government has failed in tackling the dog menace because of this. This is the work of the anti-rabies vaccine lobby because if we did cull dogs, we would not have to worry about spending so much money on the vaccine,” said Prabhakar.

Is this paranoia or simply brain-frying illogic that Kerala is falling prey to? How can a state suddenly lose all its heart and become the newfound cradle of cruelty? Corpses of stray dogs on display in Kerala. Photo: Indiatoday.in

Last year, chief minister Oommen Chandy convened an all-party meeting after the issue was raised in the assembly by government chief whip Thomas Unniyadan. The meeting had allowed local authorities to cull stray dogs but it was later abandoned following protests by animal rights groups.

Kerala citizens seem to hold a vendetta against stray dogs the way the Maharashtra Navnirman Sena does with Pakistani artistes. Their hatred for dogs transcends the barriers of the real world, to that of the virtual, as they go to any lengths to advertise it. A few hackers from Kerala, in a fit of rage of the death of the 65-year-old woman in Tiruvananthapuram, hacked Maneka Gandhi’s website - People For Animals. The group that identified itself as Kerala Cyber Warriors (KCW) has pledged to make India free from stray dog.

But Kerala’s cruelty for dogs is certainly not a result of strays being a menace. The state has known to be needlessly brutal with their animals. In 2015, the carcasses of three dogs were found hanging from an electric pole in Kannur. The dogs were killed and hanged to mark the death anniversary of RSS leader Kathiroor Manoj who was hacked to death in 2014. 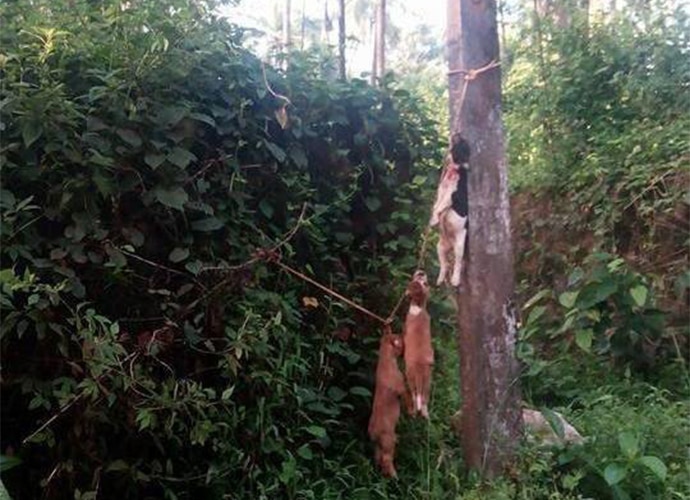 Dogs killed and tied to an electric pole to mark the death anniversary of an RSS leader in Kerala. Photo credit: The News Minute

Kannur itself is no stranger to animal brutality. Dog catchers, engaged by the panchayat, poisoned strays that resulted in the death of no less than 40 innocent animals.

Watch gut-wrenching images of puppies culled in KerelaWarning: If you are an animal lover, skip this #ITSlideshowhttps://t.co/TlKFcw9uao

Kerala’s repeated cases of animal abuse prove only one thing: No matter how educated one is, humanity is just not everyone’s cup of tea. And in a country where we don’t respect the lives of our very own species enough to not kill them over what they eat, it is but too much to hope that Kerala be a little more humane.

#Maneka Gandhi, #Animal abuse, #Dogs, #Kerala
The views and opinions expressed in this article are those of the authors and do not necessarily reflect the official policy or position of DailyO.in or the India Today Group. The writers are solely responsible for any claims arising out of the contents of this article.