Ecological exploitation of Western Ghats led to Kerala floods. But the worst is yet to come

Political lobbying and opposition from all six states along the ecologically sensitive zone forced the Centre to rethink implementation of Gadgil report.

The incessant rains and floods have left a trail of destruction across Kerala and parts of Karnataka, including Kodagu and Dakshina Kannada districts, with over 350 people dead and property worth thousands of crores damaged.

The country's disaster response units have been prompt in rescuing survivors and providing safe passage to those stranded in isolated pockets. The combined effort of the National Disaster Response Force (NDRF), armed forces and Coast Guard coupled with volunteers from fishing communities have done a tremendous job and must be commended for the work they did. A man rescues a drowning man from a flooded area in the outskirts of Kochi on August 16. (Source: Reuters)

India's history of natural calamities has invariably created a system of rapid response units to rescue and mitigate loss of lives in situations like floods, cyclones etc. Unfortunately, our mechanism to mitigate disasters in the first place is still underdeveloped and therefore, our country requires a sound policy that identifies, assesses and reduces risk of disasters.

Reducing risks in southern India would mean prioritising conservation of the Western Ghats, which has been neglected unfortunately.

History of conservation in the Western Ghats

This policy has invariably weakened one of India's oldest hill ranges making it vulnerable to natural disasters like floods and landslides.

The Western Ghats runs along peninsular India from Gujarat to the tip of southern India, it cuts across Maharashtra, Goa, Karnataka, Tamil Nadu and Kerala. A house damaged by the floods in Kerala's Wayanad, which is in the Western Ghats. (Source: PTI)

The region claims 1,500 and 500 endemic species of flora and fauna, respectively. The hills have also sustained numerous indigenous tribes for centuries and did not have large-scale human settlements until the British razed deciduous and evergreen forests to make way for less sustainable monoculture of rapid-growing teak and eucalyptus plantations, and cash crops such as coffee and tea.

Plantations and industries established by the British were bolstered after independence. Additionally, a network of dams and infrastructure for mining was developed and consolidated with little regard for the environment.

However, at the turn of the 21st century, the government intervened and attempted to reverse these policies and put conservation at the forefront. The Forest Rights Act, 2006, for example, once again made the indigenous tribes — once termed encroachers of forests — key stakeholders in the management of forests and its produce.

Similarly, the government introduced the Environmental Impact Assessment Regulations in 2006 and passed the National Green Tribunal Act, 2010, which created a body to scrutinise the environmental impact of projects before granting environmental clearance and a tribunal to expedite and dispose of cases pertaining to environmental issues, respectively.

However, former minister of environment Jairam Ramesh's meeting with civil society groups working to protect the Western Ghats in 2010 and the formation of the Western Ghats Ecology Panel or Gadgil Committee, led by Pune-based scientist Madhav Gadgil, brought hope that the area could be protected.

In its report submitted to the central government on August 31, 2011, the committee defined Western Ghats as the mountainous region encompassing 1.29 lakh square km, stretching 1,490 kms from Tapi Valley in the north to Kanyakumari in south, with a maximum width of 210 km in Tamil Nadu and minimum of 48 km in Maharashtra.

#WATCH: Aerial visual of submerged Kochi airport due to incessant rains. The airport has been shut till August 18. #KeralaFloods pic.twitter.com/0P3sNY2Jq1

The committee also recommended stringent measures to prohibit degradation of land and proposed ways to reclaim the Western Ghats. The recommendations include:

4) Complete ban on conversion of public lands to private lands, and on diversion of forest land for non-forest purposes in ESZ I and II

5) Prohibiting new mining operations in ESZ I and II area

10) Last and most importantly, the committee proposed a Western Ghats Ecology Authority to regulate these activities throughout the area

Unfortunately, political lobbying and opposition from all six states forced the government to rethink its implementation. The Gadgil report was deliberately withheld by the government from public despite RTI applications seeking a summary of the report.

This highlights the influence of the mining and real estate lobby at all levels of governance. It was only after the intervention of the Central Information Commissioner and the Delhi High Court that the document made public.

However, by the time the Gadgil panel report was made public, Jayanthi Natarajan, the then environment minister constituted a high-level working group under Kasturirangan to review the Gadgil report.

The new committee was primarily formed owning to the opposition from vested interests and states governments.

The Kasturirangan committee report, submitted to the central government in April 2013, said that of the nearly 1,750 responses it received, 81 per cent were not in favour of the implementation of the Gadgil recommendations.

Unfortunately, citizens who supported the Gadgil report were denied the opportunity to respond as the government refused to make the findings public. Only government agencies and private entities with business interests in the Western Ghats were considered 'stakeholders' in the region.

All states, however, opposed the Gadgil report, Kerala for example, had objected to the proposed ban on sand mining and quarrying, restrictions on transport infrastructure and wind energy projects, embargos on hydroelectric projects, and inter-basin transfer of river waters. It also objected to the complete ban on new polluting industries. Karnataka mobilised farmers to protest the recommendation that involved changing agricultural practice saying it would be detrimental to the livelihood of lakhs of farmers. 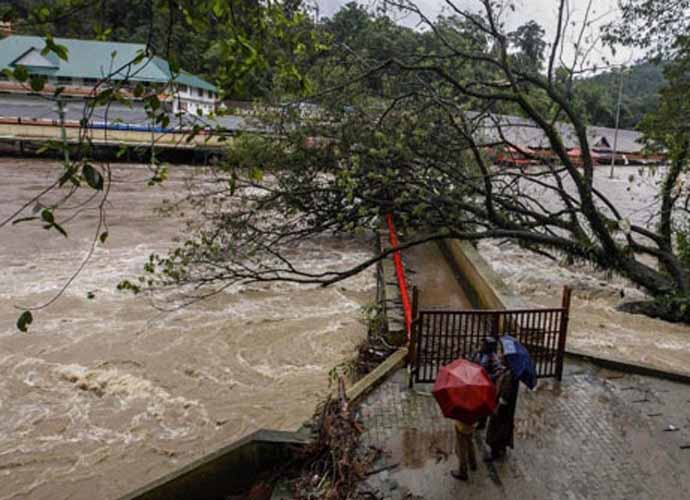 Kerala is battling its worst flood since 1924. (Photo: PTI)

It said nearly 60 per cent of the Western Ghats was cultural landscape, where human settlements, agriculture and plantations existed. The remaining was natural landscape, of which the biologically rich area was only 37 per cent or about 60,000 sq km. It was only this part that the committee said needed to be classified as ESA. The Gadgil report, on the other hand, recommended classifying 64 per cent of the area under ESA.

While the report recommended a few regulations, it diluted numerous provisions recommended in the Gadgil report, including diverting forests for constructions and real estate development.

Despite being heavily diluted, concerned states opposed even the Kasturirangan report and a final demarcation of ESA is pending due to delay and the constant ping pong between states and the Centre. Kerala has submitted its review and comments to the Centre with a proposal to reduce the area of ESA from 13,108 sq km recommended in the Kasturirangan report to 9,993.7 sq km.

Karnataka, with an area of 20,668 sq km notified as ESA, the largest among all six states, has refused to accept the findings of the report. In its correspondence to the Centre on August 16, 2018, Dr Sandeep Dave, additional chief secretary, forest, ecology stated that Karnataka disagrees with the findings of Kasturirangan report and has stated that the state will cooperate if the environment ministry sets up a committee to look into the concerns of the state. The irony is that Karnataka's response came during the height of the floods in Kodagu and other areas along the Western Ghats.

Karnataka's acceptance of Kasturirangan report might jeopardise the state's plan to divert water from the west flowing Netravati and Sharavati rivers towards the east to provide water to far-flung districts of Kolar, Chikkaballapur, Bangalore Rural and Urban. These two projects fall well within the ESA envisioned in the Kasturirangan report and will result in loss of vast tracts of forest as the infrastructure involves setting up power lines, canals and roads in the Western Ghats.

Similarly, Maharashtra objected to provisions in the Gadgil committee report that prohibited setting up of new SEZ and hill stations. It sought to further reduce ESA recommended in the Kasturirangan report to protect the interests of Lavasa Corporation Limited, which is in the midst of establishing a controversial hill station in phases in Pune's Mulshi Taluk.

In addition to this, Tamil Nadu and Karnataka have stated that they have laws and regulations in place to protect the Western Ghats. Unfortunately, despite regulations a report released by the French Institute, Puducherry has reported that the district of Kodagu has lost 40 per cent of its tree cover since 1967.

The crux of the matter is that the states in the south, particularly Karnataka and Tamil Nadu, are against an overarching Western Ghats Ecology Authority that will overlook implementation of recommendations and other environmental laws. This would invariably mean that states will lose their autonomy in managing the Western Ghats.

It is unfortunate that the issue has been politicised and that there has been no conclusive end to creating a policy governing the Western Ghats. Concerned states and the Centre must prioritise conservation of the entire region and the Western Ghats must be treated as a contiguous landmass that is crucial to sustaining biodiversity and its people.

Governments' seem to ignore the utility of the hills and its influence on rivers and lives of people in the plains of peninsular India. Almost all rivers in peninsular India originate in the Western Ghats and hence any policy with respect to the hills will have consequences for the whole of southern India.

Additionally, deforestation and change in landscape along the Western Ghats has made the region susceptible to natural calamities. The recent floods in Karnataka and Kerala highlight the growing trend. It's not just floods that are a concern, but the region is also susceptible to droughts, parts of Karnataka, including Kodagu, were declared drought affected for nearly a decade until rains flooded the district this year.

Therefore, any policy with respect to the Western Ghats must have a robust Disaster Risk Reduction mechanism and this only means prioritising conservation, protecting forests and incentivising sustainable farming practises.

Solutions for conservation are in place but the political will to endorse and implement the same is lacking.

Post your comment
#Gadgil report, #Western Ghats, #Kerala flood relief, #Kerala floods
The views and opinions expressed in this article are those of the authors and do not necessarily reflect the official policy or position of DailyO.in or the India Today Group. The writers are solely responsible for any claims arising out of the contents of this article.