DailyOh! Why Kim Jong-Un took a white horse up Mount Paektu, to the Malinga cut mystery

Kim's sister, jokingly called the Ivanka Trump of North Korea, is in the line for succession but we never know enough about North Korea.

In the middle of this madness called coronavirus pandemic, news has been trickling in from North Korea that the dictator is in a dire situation. But this is a single-source news so could just be speculation. This speculation started when Kim Jong-Un missed the birth anniversary of his granddad, Kim Il-sung. Kim Il-Sung founded the Kim dynasty in North Korea. Yes Communists have dynasties too and the ruling family is the presiding deity in the atheist regime. So are they atheists? Well, atheists do not have god or gods. North Koreans have their gods, and Kim Il-Sung was the greatest god ever. So his jayanti is not something Kim Jong-Un would miss. So when on April 15, he did not make an appearance, rumours of his illness began appearing. 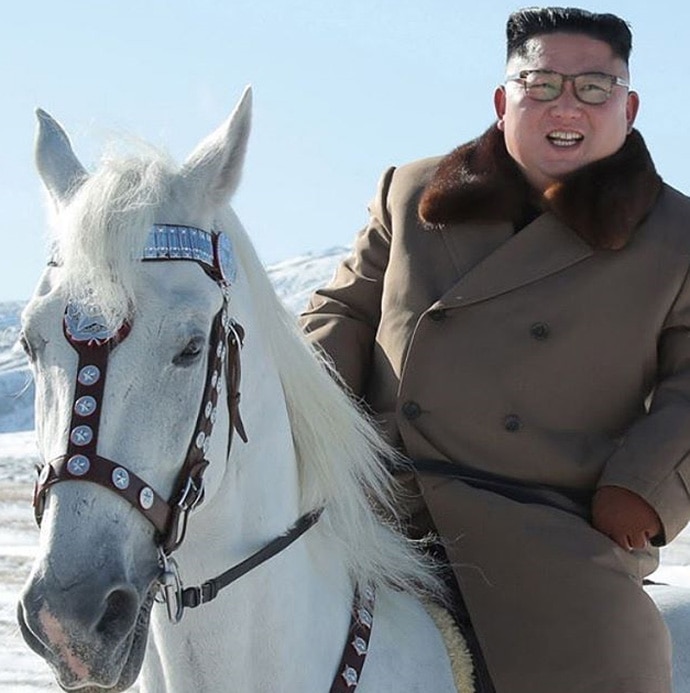 Kim Jong-Il was born on Mount Paektu that has almost the status of a holy mountain in North Korea. (Photo: Reuters)

He has been out of shape since he took over. Which other 36-year-old walks like that without a health condition? His rotundness has been a subject of jokes but cardiovascular diseases are no laughing matter. To top that, he's a heavy smoker. According to that single source run by North Korean defectors, Kim underwent a surgery that didn't go well. Some say he's in coma, some it's a full stop. Well, as we say in Haryana: Jaat marey tab jaaniyo, jab terahvin hoy. He has done the disappearing act before and come back to oversee some missile launches. That reminds us of his conspicuous absence from the recent missile launches. His last appearances showed him riding a white horse to Mount Paektu, the one he derives his lineage from. Yes, Kim Jong-Il was born on Mount Paektu that has almost the status of a holy mountain in North Korea.

We will definitely know the truth about Kim Jong-Un but it may take time. In the meanwhile, the world is speculating and preparing for a possible change in the leadership of a country that has all the arms of the world and very little food or freedom for its people. His sister, jokingly called the Ivanka Trump of North Korea, is in the line for succession but we never know enough about North Korea. Hence waiting for the next news is what the world has to do.

Staying on international events, crude prices have hit rock bottom. A barrel of oil is cheaper than cola. In fact crude futures were selling for negative yesterday. The reason is that the world is in a lockdown and nobody is buying oil. Oil as a precious resource has been losing the precious prefix for quite some time as the world moves to various new and renewable sources of energy. But oil will make a comeback when the world reopens. This joy has a short life, hopefully.

The cheap crude however gives developing countries like India a breather in these tough times. India is an oil guzzler as its people prosper and need more oil to run its economy. A major portion of India's forex ends up in buying oil. Notice that the government has slashed retail fuel prices only nominally while buying cost has dropped dramatically. That leaves a lot of moolah in government coffers to invest in pending projects and poverty alleviation. But before all that, we have to invest in tackling the coronavirus crisis. The testing, the equipment, the treatment of the sick will cost a lot. This country has come together to face the virus head on. Let us wish ourselves some success.

What is critical to success in this case is our determination to follow the lockdown guidelines. Police, entrusted with ensuring that we succeed, are trying all tricks in the book. They have used force, they have used persuasion and they innovate as they go. They have been singing songs over the megaphone and have made violators do squats on the road. In places they are shaming folks out for tafreeh. In Thane, policemen lined up people who were out for walks in the morning and performed Aarti. Not sure whether they sang Jai Covidiots Hare but hope people get the message and stay in their homes for the period the Prime Minister has requested everyone to. They are our Covidiots Of The Day. Remember, if you do not move, the coronavirus doesn't move. If you go out, the coronavirus spreads out.

That brings us to the Word of The Day. Asymptomatic: (of a condition or a person) producing or showing no symptom. That means the infection is silent like the p in symptom. So if you do not have high fever, dry cough and extreme fatigue, you may only be asymptomatic. There is no guarantee that you cannot pass on the virus to people if you are infected with it. More than half the cases in India have been found to be asymptomatic. That is, people do not even know they have the virus in them. That is why this evil is so dangerous. Wear a mask (even a handkerchief would do to cover your nose and mouth), keep your eyes covered (glasses are fine) and do not touch anything if you do go out, unless necessary. Apply sanitiser as soon as you touch stuff outside. Wash your hands thoroughly afterwards. Keep shoes outside of your house and drop your clothes in the washing machine after you come back. Sounds too much, right? Well, life is precious, not crude oil.

Why does crude oil remind one of Malinga? It doesn't. Or maybe it's his blond-tipped afro that distracted many batsmen away from his wrist action. Well, the Sri Lankan has just been declared an IPL GOAT. That is Greatest of All Time of IPL bowlers. See, the IPL matches don't seem to be happening but the announcements keep coming in to remind us about IPL. Well, Malinga sports a new hair style in every tournament but the one that's his signature is called the Malinga cut. But how did the Malinga cut become a rage? Well, Malinga likes to stand out. Not just on field when he sends that ball flying at the batsman, but off it too. His unusual hairstyles have been many, but none as famous as that unkempt blonde afro. And it wasn't an easy haircut to give. Malinga's hairdresser Nishantha Jayasekera, who runs a high-scale salon in Colombo, said that it took him two days to zero in on what later became the Malinga cut. The fact that the fearless Malinga is not scared of experimenting with his hair was a big boon for Jayasekara.

If you are thinking of getting yourself one, well, you need the raw material like that for the salon to give you one.

Talking of haircuts, how have you been doing to get one for yourself. On social media, we see a lot of videos of family members giving each other haircuts. Even Virat Kohli got one from Anushka Sharma. Do not try that at home. Head to your salon the first thing after this gets over.

Also read: DailyOh! Why Djokovic can risk his career for coronavirus, to who is eating up the Titanic