P.S. They don't even know many cricketers of our women team!

At a time when we were almost tired of seeing apparently 'woke' boys everywhere, Hardik Pandya and KL Rahul happened to us on Karan Johar’s show Koffee with Karan.

This was the first time that some non-Bollywood-type people were here, and oh, my dear God, were they real?

They are like those party boys who were once considered ‘cool’ because they don’t even ask girls their names; they send the same texts to all girls (because why not — if you have the same feelings), they are ‘afraid’ that people may think that they are in a relationship with each other (otherwise, what are these two good-looking boys doing together?) if they hang out too much together.

Also, here is a rejoinder: They were together on the show, so they are being blamed equally.

But KL Rahul was way better than Hardik. So, forgive us for this bashing. Not everything is applicable to 'K'. 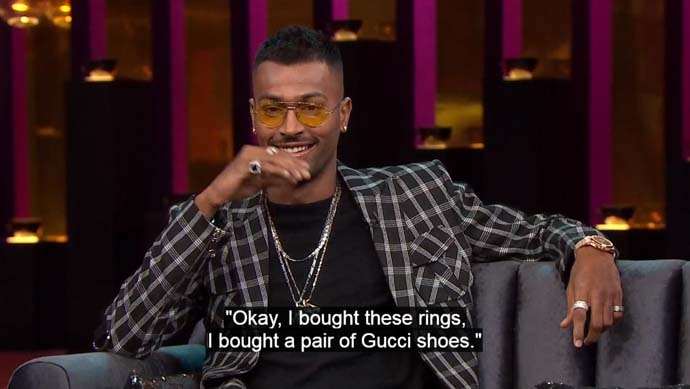 Apparently, this is how 'divas' behave. (Photo: Hotstar)

What’s a 'diva kind of behaviour'?

Karan Johar is a wordsmith, we all know. Many of us have enriched our vocabulary from his show. But he was stumped when KL Rahul said that Hardik is known for his ‘diva kind of behaviour’.

It’s like when you suddenly show off your watch, or something branded, just to hog the limelight during a group discussion — of course, you don’t have an iota of interest in what’s going on in the discussion.

Boss is the best (but naturally)!

So, who’s a better batsman between Sachin Tendulkar and Virat Kohli? Pat came the reply. Virat Kohli. From both of them. 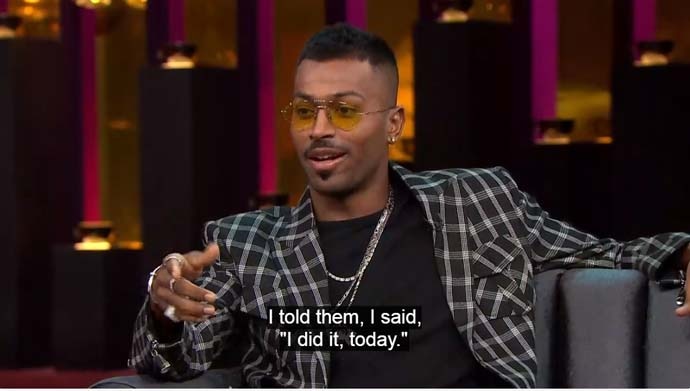 How do you describe your first sexual encounter to your parents? Well, okay then. (Photo: Hotstar)

The idea of an 'open family'

Pointing to every girl present at a party when parents ask ‘tera wala kaun sa hai' (which woman is yours?) — because Hardik actually had something with everyone in that party and he was quite open about it to his parents as well.

And then, they are apparently proud of the achievement.

What if multiple players are dating the same girl?

KL Rahul was the calm conscience-chap who said that the girl gets to decide.

But then, blingy Hardik dismissed him, saying nothing like this happens — it depends on the talent of the contenders.

It’s very important to 'watch how they move'

Hardik was talking about women in parties, if you still don’t get the dimension the chat show went towards. Also, there is a reason for it. Wait for Hardik Pandya's explanation. He apparently has a ‘Black’ side in his character, which is quite dark anyway, we must say. To clarify, Hardik meant a West Indies side. But his pronouncement left us bowled.

One good thing KL Rahul did was to say Dhadak was an overrated movie, in front of Karan Johar. But otherwise too, Karan Johar was thoroughly in a state of shock.

And we just loved that!

PS: They don't know too many cricketers of our women's team. Surprised?