The headline that Pakistan’s Geo TV ran for a good while day after the family of incarcerated Indian citizen Kulbhushan Jadhav met the alleged spy from across a glass partition, speaking over an austere telephone line with many interruptions in a policed and alien language, read: “Pakistan tests shoes of Jadhav’s wife for suspicious object.” That this would indeed be made into an issue was already hinted at by the Union ministry of external affairs in its statement published yesterday, when India raised written objection at the wife and mother of Jadhav being strip-searched, and made to suffer serial humiliation.

The media questions to Jadhav's mother & wife were not only harsh & insensitive but they also manifest the mob mentality of media globally. It doesn't just happen in Pakistan, it happens all over. Innocent people pay a price for their connection to alleged or convicted terrorists

Geo News quoted Pakistan “foreign office spokesperson”, saying that the authorities “suspected the presence of a foreign object” in Chetankul Jadhav’s footwear, and this reaction came in after India rightly criticised the move by Pakistan government. Moreover, the access that Pakistani mediapersons got to the Jadhav women was misused to the hilt, as they were heckled, called “qatil ki maa”, and generally insulted. Yet, what played on loop on Pakistani news channels and the fierce editorials that were penned were in service of the “grand humanitarian gesture” that Pakistani foreign office and the military industrial complex presented the sham Christmas encounter as. 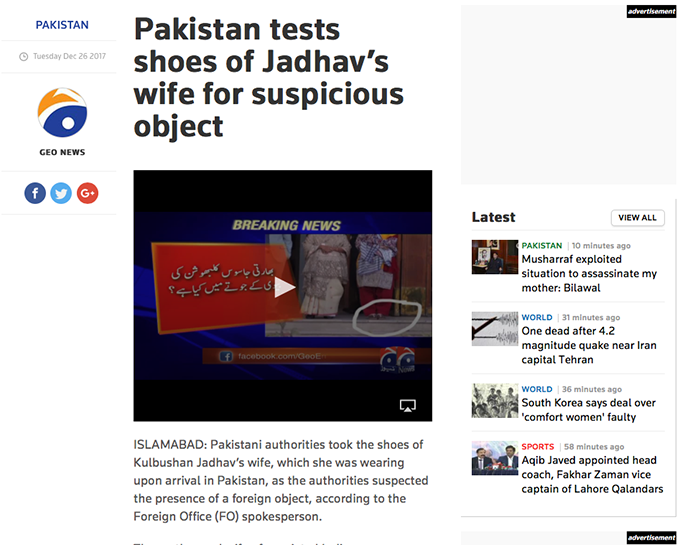 Geo TV also carried Pakistan foreign office soundbites almost verbatim, saying “Kulbhushan Jadhav is the face of terrorism in Pakistan”. Quoting Muhammad Faisal of the foreign office, Geo TV reiterated the official Pakistani stand that Jadhav was a “terrorist, spy and a saboteur who was caught ‘red-handed’ and was conducting terror attacks in Balochistan and Karachi”. Moreover, calling the meeting “pleasant” and “extended to 40 minutes after Jadhav requested 10 minutes more”, this was about “upholding all promises and commitments”, for the Pakistani side.

#Pakistan has categorically rejected #Indian baseless allegations and twists about the visit of wife and mother of Commander Jadhav.Dr Muhammad Faisal said that if Indian concerns were serious, guests or Indian Deputy High Commissioner should have raised them during the visit. pic.twitter.com/EicZCR4PEl

Although giving the whole affair a more balanced coverage, the newspaper Dawn reiterated the Foreign Office stand on the issue of not returning Chetankul’s footwear, saying the Foreign Office “categorically rejected” the Indian claims. However, Dawn’s previous coverage of the meeting stuck to facts, without going overboard about Pakistan showing its heart by “allowing consular access”, which it has now clarified wasn’t granted to Jadhav.

Reports of how Pakistani journalists cornered Jadhav’s mother and wife with questions peppered with hurtful and insulting phrases have surfaced. Some of the particularly caustic remarks include:

"Aapke patidev ne hazaron begunah Pakistaniyo ke khoon se Holi kheli ispar kya kahengi?” (Your husband killed thousands of innocent Pakistanis, what do you have to say about that?) 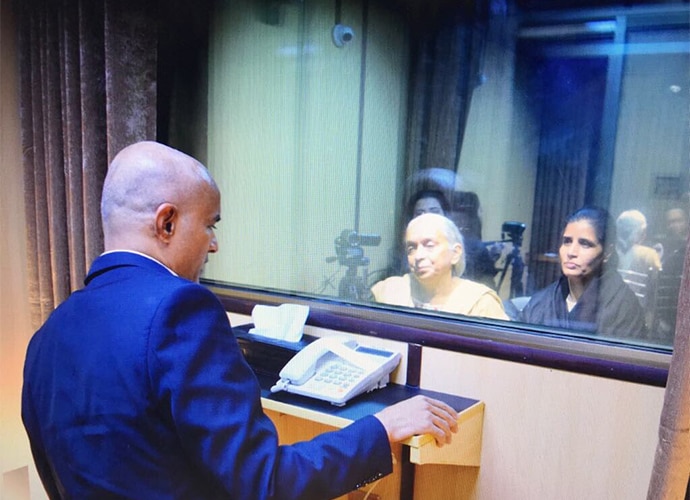 Though, Pakistani Foreign Office said that “this is not the final visit” of the Jadhav family, indicating future visits and possibility of negotiation, it also indicated in a press conference soon after the meeting that “one good gesture should beget another”. That the embedded coverage mostly pandered to conformation bias of the Pakistani public sphere, in which the “grand gesture” of allowing a convicted spy to meet his family was paraded to gain moral brownie points, becomes even more obvious when we look at the editorials published in the wake of the diplomatic kerfuffle.

The News International in an editorial called it the “Kulbhushan conundrum”, saying the “marvelous madness called diplomacy” nevertheless mustn’t take away from the fact that “for Pakistan, Jadhav plainly remains a ‘spy and terrorist who has been sentenced to death’”. 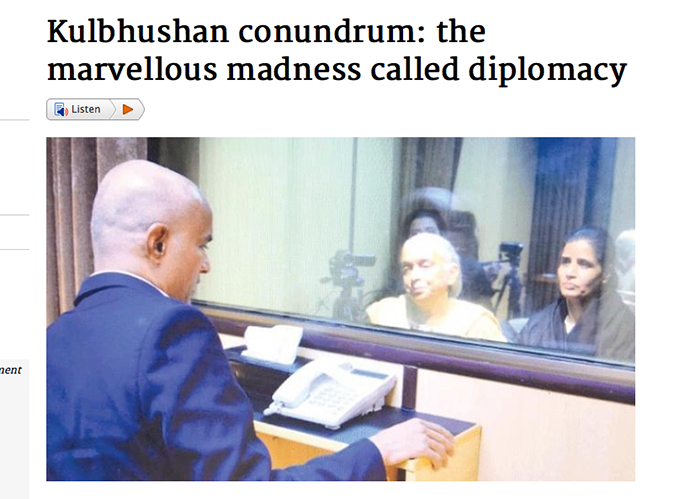 It added: “The upshot of Christmas Day tete-a-tete is that it happened. What was discussed between a son and the mother and what a man and his wife spoke about while officials watched would remain a guessing game for now. Ideally, one must desist from such a frivolity. But this is a serious matter and would become serious still in coming days and months. Twitterati have suggested a spy swap somewhere down the line where Jadhav could be bartered for a retired Pakistani colonel who disappeared in Nepal some time ago. Who knows?”

“For now, Pakistan has kept a door open for future meetings between Jadhav and his family. Its spokesman has once again laid bare the facts of Jadhav’s activities in Pakistan for the world and Indians to see and stomach. It remains too early to predict how the case would progress in the international court and what would be the final outcome of this ghastly episode of blood and terror. But most Pakistanis want Jadhav punished for his sins and not let out like the notorious American Raymond Davis through a backdoor deal.”

Another editorial, published in The Nation, had the headline “Humanitarian Grounds”, and lamented the jingoism that ailed both sides of the media coverage, saying: “As expected, each side has their own subjective take as well as their own spin to the matter. Divided opinions can be found on the Indian side. While social media was awash with individuals bashing Pakistan’s allegedly “disrespectful” behaviour towards Jahdav’s family and highlighting how there was a physical barrier between him and his family which did not allow contact. Despite this, there were others who were highly appreciative of Pakistan’s gesture as well – including Jadhav’s family itself. Similar is the case on the Pakistani side. While many were appreciative of the government for considering the humanitarian aspect, nationalist groups felt outraged that a family reunion was being organised for a man dubbed as India’s “face of terror” and who has admitted to committing espionage, killing several Pakistanis, and working for Research and Analysis Wing (RAW). ‘India doesn’t afford Kashmiris any such concessions, was the refrain on many tongues.”

The rational statement from our Foreign Office that is a manifestation of how hostility increases with shrill media utterances and irresponsible government accusations from the Indian side. https://t.co/HQ1iqlW9bU

Ultimately, the Jadhav episode became a peg upon which to hang the growing stranglehold of the Rawalpindi military industrial complex, which has essentially carried out a public relations coup within Pakistan, dressing it up as kindness, a grand gesture, undertaken on humanitarian grounds. That’s the narrative which was after all intended by those at helm in Pakistan, and, expectedly, has been deemed “very irresponsible” by the Indian side.