Ode to Allahabad: Kumbh is grand and gorgeous. But the city needs salvation

The city cannot live without either of its identities — religious or historical, Nehruvian or dharmic.

The first time I visited Prayag, or Allahabad, in 2007, I imagined the magnificent scene of the Kumbh Mela on the banks of the Sangam (the confluence of the rivers Ganga, Yamuna and the mythical Saraswati). I wanted to see the Kumbh with my own eyes, because of my deep faith in the mighty Ganga.

I have reasons for my extra attachment with this river — watching her flowing with pride (while counting dolphins from the Darbhanga Ghat in Patna or solving the epistemological complexities of tradition and change at the Assi Ghat of Banaras) helped make my thinking more rational during my formative years. I have also been aware of the much-accepted belief, endorsed by Hindu mythology, that one attains nirvana (salvation) after a dip in the Sangam during Kumbh.

The Kumbh is held every three years at the banks of four rivers — the Ganga in Haridwar, the Sangam in Allahabad, the Godavari in Nashik and the Shipra in Ujjain — places where nectar churned out of the ocean by gods and demons is believed to have fallen.

The Maha Kumbh, which returns every 12 years, is the biggest in terms of magnitude, and considered holiest by belief.

This year, the Kumbh began in a charged political climate, with Parliamentary elections round the corner and Yogi Adityanath helming affairs of state as Chief Minister. Thus, politics, along with faith, pulled millions to this huge festival. By a conservative estimate, about 80 million people will participate in the Kumbh this year. But if you go by what local residents say, the numbers are likely far higher.

The city of Allahabad (now Prayagraj) is primarily popular for three icons — Triveni Sangam, Allahabad University and the Nehrus’ association with it.

While the city has much to offer from the pages of history, as of now, it’s also a vital urban space in a new India no longer dominated by Nehruvian ideals alone. Allahabad University: Past glory, present decay — much like the rest of the city. (Photo: PTI/file)

Probably this major shift impacted Nehru’s city most adversely. Also, the global integration of economy and increasing crime in the city disoriented it from the challenges of modernity. Very swiftly, its prominence in India’s decision-making circles eroded. On this count, Allahabad appears strikingly different from Varanasi, which is still walking with its glorious past, without compromising on its essence.

The glorious Banaras Hindu University and the fading Allahabad University are the real pictures of these cities respectively. Even the flowing Ganga has an entirely different representation in Allahabad and Varanasi.

If Varanasi welcomes the river through princely-looking structures along the ghats, Allahabad makes it look like a water body running through a barren and sandy land. In Allahabad, in places, the Ganga is little more than a muddy stream. In Varanasi, it laps grand ghats. (Photos: Reuters/Twitter)

In spite of this, the Kumbh gives Allahabad a reason to immerse itself in the joy of festivity; it is really hard to express in words the belief a sea of humanity holds, moving forward to take a dip in the river. They do not care about the quality of water or other hassles — to them, the water is amrit or nectar, which helps them attain salvation.

Where else on our planet can we witness millions of people gathering at a single place to take a bath?

We also rarely see such liberal expression of one’s faith — the spirit of the Kumbh is non-partitioning. A sizable number of visitors to the Kumbh are non-Hindus, and they travel thousands of miles within India and from outside. The will to participate by visitors, and its positive reciprocation from different organising quarters, allow free and fair access for all. Not only pilgrims, but even sadhus (including Nagas) from various akharas erect their tents along the banks of the River Ganga, making the place look like a mini town. 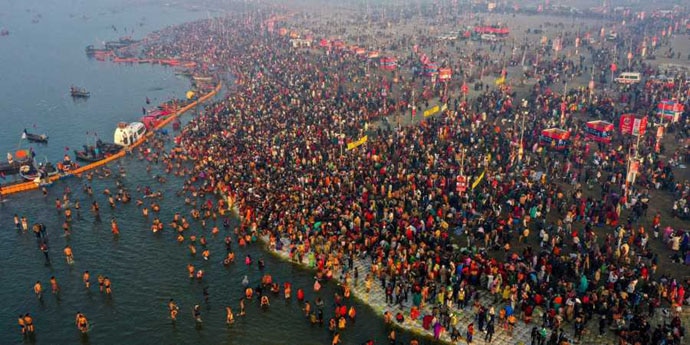 Where else on our planet can we witness millions of people gathering at a single place to take a bath? (Photo: PTI)

This time, the temporary town, spread over hundreds of hectares and arranged in sectors, is better managed than the actual city. Police officers and hospitals are working round the clock, addressing visitors’ concerns.

The last time the city hosted a Mahakumbh, an unfortunate stampede at the Allahabad railway station took 36 lives. This tragedy, that marred an otherwise well-organised festival, could have been averted if railway officials acted in time.

Today, the crowded city, without proper facilities at many places, is inviting pilgrims and wanderers to spend time and money. Everything is not proper, but somehow ‘adjustable’ — from hotels to public transport. The Kumbh tent city is better managed than the actual city. (Photo: Reuters)

Naga sadhus, their bodies smeared with ash, get the maximum attention from commoners and the international media. Such attention is driven by amazement. These sadhus remain vigilant though while facing the uncountable cameras.

However, there are others who are not really sadhus, but impersonating the Nagas for quick prestige and attention. Some of them have been clicked by the western media, holding guitars or with other objects not used by a real Naga. Faith and curiosity — the Naga sadhu symbolises two of the biggest reasons visitors flock to the Kumbh. (Photo: Reuters)

By night, the entire area seems to justify the money the government has spent on hosting the Kumbh. The ground is flooded with white lights, and songs from the camps make the ambience more appealing — interrupted only by frantic announcements about people separated from their companions in this sea of humanity.

Ascetics, materialists and agnostics, there is place for everyone.

One can never enjoy anonymity more than at the Kumbh grounds.

One gets satisfaction in being ‘unknown’, and surrounded by an indifferent crowd, intent on its own business. The crowd has a unique character — everyone is in pursuit of something not material, not in sight.

The rest of the city offers much to appreciate, and much to ponder about.

While walking around the Allahabad University’s crumbling edifices (which once had the tag of ‘Oxford of the East’), or looking at its awkward gun shops and seedy hotels, I wondered why the city was turning into a museum — of its own rich past. Anand Bhavan, erstwhile ancestral home of the Nehru family, still plays host to a high number of tourists — Allahabad can’t do without Nehru’s legacy. The city’s roads, hospitals and other landmarks confirm this. But the sorry state of important landmarks highlights massive systemic inertia. The world should visit Allahabad for reasons besides the Kumbh. Hopefully, it shall not limit this city’s right to retrieve its happiness.

A city should not be known for carrying the burden of its past — rather, it should assert itself in all directions. More than any other historically important Indian city, Allahabad is waiting for that overhaul in its daily affairs. The city deserves much better.

Alas, the new regime is cut off from that history, and can’t risk embracing it due to political populism. So far, the only ‘change’ the city has seen is the changing of its name to Prayagraj. This reverting to its ancient name was done to keep the city in confrontation with its current identity, coming through in ‘Allahabad’.

But such changes will only keep the city distracted — and darker.

The city cannot live without either of its identities, religious or historical. Deep thought, and deeper action, is essential to solve this identity crisis.

#Ganga, #Prayagraj, #Allahabad, #Kumbh mela
The views and opinions expressed in this article are those of the authors and do not necessarily reflect the official policy or position of DailyO.in or the India Today Group. The writers are solely responsible for any claims arising out of the contents of this article.