Languages have always co-existed in India and will continue to co-exist. What is needed is a deep desire within people to ensure its prosperity. The hollow politics around languages serves no one and should be junked.

People today are worried that our civilisational and cultural values are under siege, and the enslavement of our mindsets to thoughts that are alien to this land is near complete. We should be however confident, as there has been a revival in the interest in our traditional knowledge and wisdom, even as the world sits up to take note of it. The torch of knowledge that Swami Vivekananda had lit in Chicago in the United States of America in 1893 with his speech, which incidentally was delivered this very month (September 11 to be precise), is now illuminating the whole world.

The acknowledgement of the importance of India’s civilisational knowledge is gauged by the fact that the Narendra Modi government had passed the Central Sanskrit Universities Bill in 2019. The Bill, which seeks to convert the three deemed-to-be Sanskrit universities into Central universities, also intends to disseminate and advance knowledge for the promotion of Sanskrit, make special provisions for integrated courses in humanities, social sciences, and science, and train manpower for the overall development and preservation of Sanskrit and allied subjects.

With this Bill, the step to reclaiming India’s cultural heritage has been initiated. This is a strong sign of how powerful a medium of expression the language has become. Moreover, the revival of interests in researching and reading texts has gone beyond academia today as several enthusiasts are writing their own thoughts and making invaluable contributions to the study, analysis and propagation of Sanskrit and the wisdom it contains. 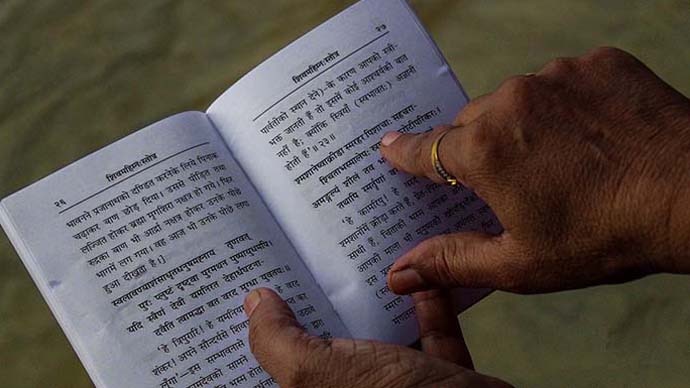 Promoting Sanskrit is seen as some kind of cultural imposition. This is an unfounded claim because the diversity of language does not hide the commonality of the wisdom that India’s languages enshrine unto themselves. (Photo: Wikimedia Commons)

The Upanishads serve as a great example of India’s heritage of knowledge, wisdom and chintan or logical thinking, an art getting drowned out in the noise of today’s media. Swami Vivekananda had personally done deep reading and analysis of the Upanishads and had a lot to say about them. In the Upanishads, he saw the knowledge that our great rishis had realised based on contemplation, and define our relationship with the universe, tying all of humanity into a single thread of unity. As Swami Vivekananda had once remarked, the theme of the Upanishads is to find an ultimate unity of things. Knowledge is nothing but finding unity in the midst of diversity. The Upanishads are generally accompanied by a commentary or bhashya by Adi Shankaracharya in a scientific and rational manner, even though we do not know who the authors of the Upanishads are today. That in itself tells you the importance and significance of the divine knowledge that the Upanishads carry.

The undeniable power of the alphabet

While we talk about the Upanishads and wisdom in languages, we often forget the very root of any language: the alphabet. It is essential to remember the supreme status that Indian civilisation accords to words and letters, even ascribing divinity to it. The essence of alphabets and words can never be highlighted enough in the land of Panini’s Ashtadhyayi. In the Shiva Sutra Vimarshini of Vasugupta, Abhinavagupta’s disciple Ksemaraja had delineated the power of the alphabet that constitutes words. While we all identify with language as the manifestation of VagDevi or Goddess Saraswati herself, Ksemaraja took it further to identify the Goddess with Maya herself, noting how everything can be summed up by the varnamala or the alphabet series and becomes the bearer and carrier of the power of the words themselves. A book like the Akshar Yatra, therefore, should not be seen in isolation. Rather, it should be recognised as a powerful medium of knowledge expression.

Great philosophers like Abhinavagupta had reached their heightened status of awareness by also engaging in extensive writing, including books such as the Gitartha Sangraha, his commentary on the Bhagavad Gita. That he used the power of words to create an everlasting influence on philosophy and culture, symbolises the power of the word.

Community responsibility to preserve and promote wisdom in Indian languages

Often we see politics surrounding the ‘imposition’ of languages, with fears being expressed about languages disappearing. Promoting Sanskrit is seen as some kind of cultural imposition. This is an unfounded claim because the diversity of language does not hide the commonality of wisdom that India’s languages enshrine unto themselves. When a Jnaneshwari is written in Marathi to convey the eternal message of the Bhagavad Gita, or the Thirumurai gives us messages of the Shaiva Siddhanta that derives deeply from Vedic and Pauranic traditions, or when poets like Laleswari pass on the message of Advaita through their vakhs, what we see is the civilisational strand that ties the diversity of India, without finding any hindrance in languages in expressing itself.

Of course, there are genuine threats to languages disappearing within our lifetime, and this is not an unfounded fear in its entirety. Is the answer, however, with the governments of the day, or with the people themselves? The answer is both, but the proportion of share definitely falls far more in the basket of the community and people. The inability of our own people to express ourselves in the languages of our forefathers cannot be necessarily blamed on governments. It is a conscious choice we have made in the past couple of generations to dissociate ourselves from the expression of our identity. This is perhaps a bigger threat to the existence of any language than supposed impositions; nothing can disappear if the people speaking a language truly desire to nurture it, revive it, and/or standardise it, as could be seen in the cases of Hebrew or Magyar. However, should the standardisation be evolutionary in nature? Should it be forced upon people as has often been the case with certain languages in India by vested interests? These uncomfortable questions do not get answered in a straightforward manner, and it is time that these discussions take place as well.

Claiming that a language is in one’s blood is laughable if one cannot even write two straight sentences in it. What stops people from setting up language promotion committees and organisations of their own making without the government’s intervention? This hollow politics serves no one and should therefore be junked. Languages have always co-existed in India and will continue to co-exist. What is needed is a deep desire within people to ensure its prosperity. That is perhaps the better approach to addressing the contentious issue of preserving and nurturing languages, instead of crying wolf where there is none.

Also Read: How Punjabi glued us together, across generations and countries

#Swami Vivekananda, #Vedas, #Sanskrit literature, #Languageimposition
The views and opinions expressed in this article are those of the authors and do not necessarily reflect the official policy or position of DailyO.in or the India Today Group. The writers are solely responsible for any claims arising out of the contents of this article.