News organisations, which would normally produce outraged think pieces if the gender was reversed, trivalised a serious crime.

Unwanted sexual advances are unwanted (and therefore harassment), irrespective of the gender of the victim and the assaulter. Unfortunately, we seem to forget that all too often.

An incident of sexual assault, where a woman was the perpetrator, seems to have been taken lightly by media houses across the board - the same news organisations that would normally produce outraged think pieces if the gender was reversed in this situation.

According to various reports, an inebriated woman from Kolkata allegedly kissed a policeman after she was pulled over for getting into an accident. Police said the 38-year-old woman was driving under the influence of alcohol, when she hit a divider at bypass Chingrighata Mor. A taxi driver, who attempted to rescue her, was allegedly assaulted by her. When a constable tried to pull out the woman and her friends, she embraced the constable and started kissing him. To control the situation, police asked a local woman for assistance, who helped the cops lead the drunken woman and her two friends to the police station.

The woman has been booked for rash driving under the influence of liquor. Cases have also been initiated against her two friends for misconduct.

So, what’s the problem? Well, there is.

A few headlines that reported the story seemed to present a picture that trivalised a serious issue like sexual harassment. Huffington Post’s headline read, “drunk woman pulls cop into passionate kiss after midnight accident in Kolkata”.

Had the gender been reversed in this story, would a news organisation describe the kiss? Obviously not. In a similar vein, Times Now’s headline read, “TGIF? After getting into accident, drunk woman kisses policeman”. Sure, thank god it’s Friday because sexual assault is fun! DNA called the incident “bizarre”. And ScoopWhoop goes five steps ahead of all the others and reports, “Kolkata cop’s modesty violated by a woman after she got pulled over for drunk-driving”. There are two possible explanations to this headline. One, ScoopWhoop is trying to be ironic, in which case, it is absolutely not funny. Two, they believe sexual violence is a violation of modesty.

Author Jennifer Mathieu says it best when she says, “If rape culture is defined as a culture that normalises sexual assault and finds ways to blame said assault on victims, modesty culture is certainly the twin to such disordered thinking.” 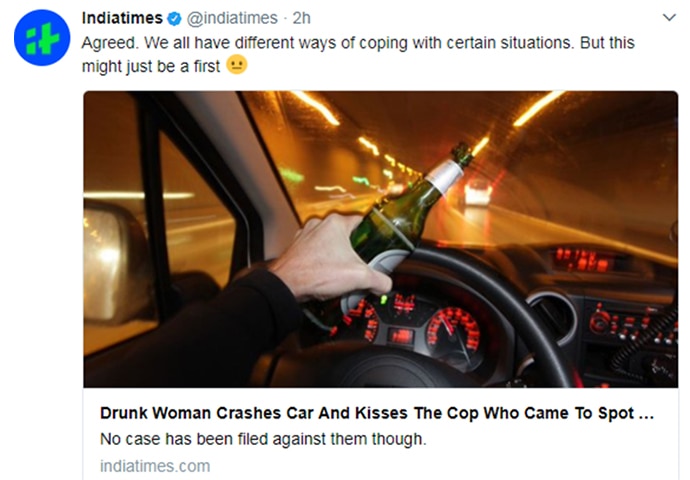 Each and every story, headline or text mentioned here treats this issue as everything but sexual assault. If I didn’t know any better, they are probably imagining the story as a comedy segment in a '90s Bollywood movie. Whatever it is, it is unacceptable.

There is no whataboutism here. Yes, asking one to hypothesise a situation where the gender was reversed sounds like that, but there really are no two ways to look at this story. A drunk person made an unwanted sexual move on a sober person who was trying to help her. That’s it.

Anyone trying to trivialise that is either really ignorant about how sexual assault takes place, or just cannot wrap their heads around the fact that women can be in the wrong or men can be the victims.

Post your comment
#Gender Inequality, #Kolkata Police, #Sexual assault, #Liberal Media
The views and opinions expressed in this article are those of the authors and do not necessarily reflect the official policy or position of DailyO.in or the India Today Group. The writers are solely responsible for any claims arising out of the contents of this article.