How anonymity allowed the weaponisation of WhatsApp

If data is the new oil, then India in recent weeks has seen it being used to make Molotov cocktails. Heeding rumours of child-lifters spread by the popular messaging application WhatsApp, mobs have brutally lynched 30 persons across the country, bludgeoning their victims to death with sticks, stones and iron rods.

The dead were among the weakest, most vulnerable members of society, migrant workers and beggars, in some cases, simply travellers stopping to ask for directions. These tragic incidents, separated by thousands of kilometres, have followed an uncanny, near-identical pattern of mayhem.

Outsiders are regarded with deep suspicion and, for each fatality, dozens of others have escaped lynch mobs by the skin of their teeth. The perpetrators who subjected their unsuspecting victims to medieval barbarity carried the best of modern technology — smartphones. The contrast couldn’t have been starker. 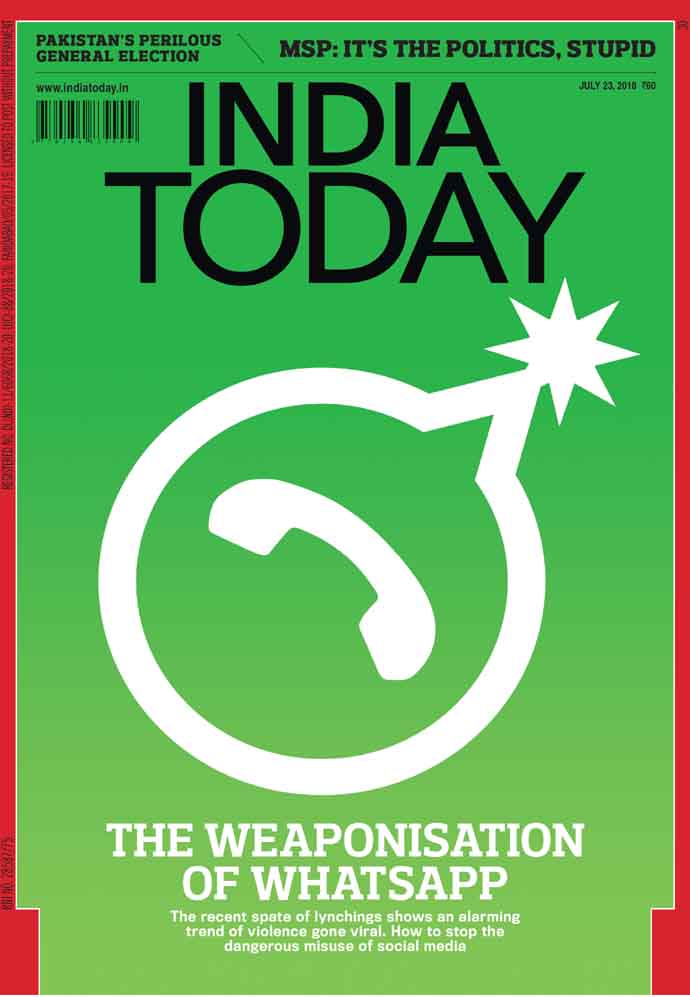 India Today cover story, The Weaponisation of WhatsApp, for July 23, 2018.

WhatsApp’s end-to-end encryption is a powerful tool for ensuring the privacy of communication. The platform claims it does not store messages which means it is less likely to face issues like the behavioural profiling of millions of users that its parent company Facebook faced earlier this year.

Tragically, however, the platform’s features, the easy sharing of videos, particularly the anonymity it gives the creators of malicious content, have also come as a boon to mischief-mongers and those aiming to provoke communal hatred, a case in point being the morphed photographs of "Muslims" demanding the release of the accused in the rape of an eight-year-old child in Mandsaur or the fake quotes ascribed to the newly elected MP from Kairana in UP.

This anonymity has allowed for the weaponisation of WhatsApp, its conversion into an agent of what the military calls information warfare. The result, of course, is societal chaos. These are among the complex issues raised in our cover story put together by executive editor Sandeep Unnithan with inputs from our state bureaus.

WhatsApp clearly cannot absolve itself of responsibility. Over 200 million Indians make up its largest customer base but, curiously, the app does not have a country representative. Nearly, a month after the violence began, we are yet to see the safety features to prevent rumour-mongering that WhatsApp said they would instal.

To repeat what I said at a recent Global Editors Network summit in Lisbon, which discussed how to combat misinformation, tech giants like Google and Facebook must take greater responsibility to prevent false news. They regard themselves as mere platforms. They are not platforms, they are publishers. If I repeat defamatory content, then I’m as liable as the originator of that content.

The government recently issued a stern reprimand to WhatsApp, but can states shirk responsibility in containing a law and order problem which is their constitutionally defined responsibility? The violent episodes have revealed capacity deficits in our policing, particularly in the semi-urban areas where a bulk of the lynchings have taken place.

India has one of the world’s lowest police to population ratios, 137 for every 100,000 persons, as opposed to a UN recommendation of at least 220 policemen. These shortages and the anonymity of murderous lynch mobs have provided a refuge to the feral Indian even as the law is yet to even recognise lynchings as a separate offence.

These are issues we raised in our cover story exactly a year ago (Stop the Madness, July 24, 2017) when we saw at least 50 cases of mob lynchings in three years, most of them related to the beef and cattle trade and carried out by self-styled cow protection vigilantes. A year later, frustratingly, these are issues that still escape scrutiny.

We, the smartphone users, are also part of the problem.

How many times have we forwarded unverified defamatory content without checking its authenticity or considering the impact of our actions?

People have to start believing in trusted brands to deliver their news and not the unverified content gushing out of their smartphones.

Remember, not every message you get is news and the next time something appears too incredible to be true, it probably is. Let’s not turn a convenience into a weapon.