Madhorubagan or One Part Woman is the kind of social commentary you need to get back to reality after celebrating womanhood for a day.

What part of your relationship defines your marriage? Are you willing to do anything — ANYTHING — to “complete” your marriage? Does the existence of a child in the marriage ensure its fulfilment? Is your partner’s love enough to counter the barbs of society? These might seem like questions haunting any married couple (especially the childless ones) but these are pointed questions that Kali and Ponna, the protagonists of Perumal Murugan’s polemic novel Madhorubagan (translated title: One Part Woman) face.

Madhorubagan, first published in 2010, delves into the issue of childlessness of couples in Indian society. Set about a century ago in Tiruchengode in Tamil Nadu (the author’s native town), this simple story has powerful undercurrents that can sway the strongest among us. 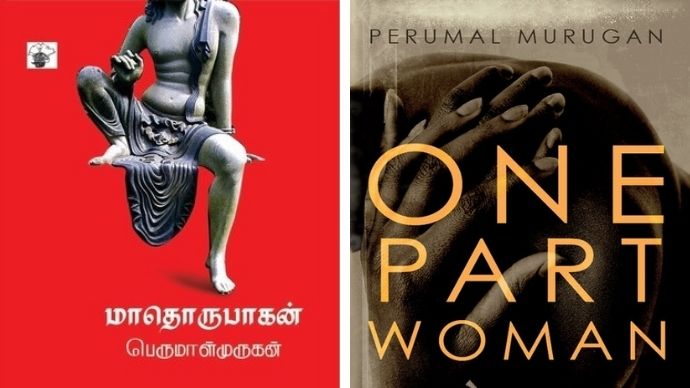 The covers of the original (left) and translated (right) versions of Perumal Murugan's novel.

In a nutshell, Kali and Ponna have been married for 12 years and have no children. Facing all kinds of taunts and jibes from their friends and neighbours, Ponna and Kali give in to all kinds of rituals, superstitions and worship at every shrine, only to find that all Gods and deities have turned their backs on them. Life lacks nothing — they have each other, their love, pets, farms, abundance — only lacking is a child. Adoption is also subject to social norms and barbs. With no other option, Ponna succumbs to her parents’ insistence to the societal practise of sleeping with a stranger for a night, when the norms of society are relaxed and women desiring children are permitted to have sex with strangers, at the temple festival. A man she considers "god" to impregnate her. The temple is the famous Ardhanareeswarar temple of Tiruchengode — Ardhanareeswara is Lord Shiva’s androgynous form and Madhorubagan is his Tamil name, and thus the title.

How will Kali react to Ponna yielding to the custom? Will she finally bear a child? Will their lives ever be the same?

One of the key components in the story is the mad love and passion that Kali and Ponna have for each other even 12 years into their marriage, despite the childlessness (or perhaps even because of it!), much to the resentment, annoyance and envy of their families, neighbours and friends. And thus begin the barbs — initially at Ponna (the womenfolk are always the first to be blamed for such issues), eventually stabbing Kali too (no man or manhood is impervious to it).

The novel is best read in Tamil if you can read the language. Perumal Murugan deals with the complexities with an immensely light hand — each character speaks for itself. His descriptive prose builds a lifelike picture in your head in which you are transported to the Tiruchengode in the colonial era. However, Aniruddhan Vasudevan’s idiomatic translation is your best bet if you choose to read it in English. He preserves the sanctity of the original and ensures that the linguistic mood — which Perumal Murugan intended — is retained.

The controversy of depicting the temple ritual led to many protests with protestors burning the copies of the book and lodging an official complaint demanding a ban against the book and the arrest of the publisher and author in December 2014 — four years after the book was first published. Perumal Murugan earned death threats and went into a self-imposed "literary suicide" and eventually won the battle against his violent detractors in the court of law. In the verdict delivered in July 2015, Chief Justice of the Madras High Court ruled, "The author and artistes like him cannot be under a constant apprehension that if he deviates from the oft-treaded path, he will face adverse consequences. Let the author be resurrected to what he is best at. Write." A landmark verdict and victory for free speech in the country.

However, when you read the novel, you will see for yourself that Madhorubagan is remarkably serene and a sensuous read for all the noise it garnered.

This is the kind of book that you pick up once the Women’s Day fervour settles and you come back to the reality that haunts the Indian married woman without a child. The barren wife.

Also Read | A censor is seated inside me now: Perumal Murugan in his own words