Madhya Pradesh's school education minister Vijay Shah has come up with a peach of a reform. In a flash of inspired brilliance, he has stumbled upon a sure-shot educational boost for promoting patriotic zeal in students. The students, to begin with, of a district in Madhya Pradesh will answer their roll call, not with “yes, sir/ma’am”, but with “Jai Hind.”

See, the trouble with you and I is that we don’t have patriotic brains. Did it ever occur to you that such a goldmine existed? No, not at all. Why? Ever wondered?

Practical people know shortcuts. Like cheating in examinations, rather than burning the midnight oil (or electricity, now that Piyush Goyal has electrified most of India). Like communally polarising voters using fake news rather than winning votes through good governance. It’s so very hard to deliver on promises. Visuals (somebody burning the national flag, never mind where), insinuations and slogans can be rationed as diet of hatred. After all, isn’t it enough that one does according to his best talents?

So, there are two different roads to patriotism. The long shot is that you empower children and citizens, create a shared excitement about taking the country to the next level of human welfare and fill the hearts of citizens with national pride.

Like what I saw in Seoul, South Korea. In 1988, I was an invitee to a conference that preceded Seoul Olympics by two weeks. The excitement of the people was simply out of this world. 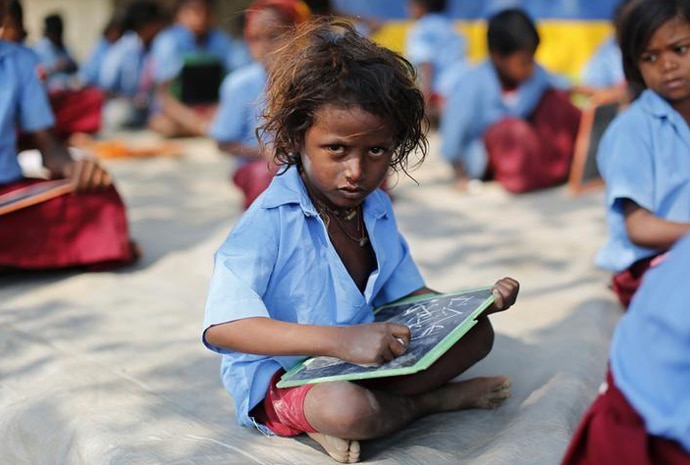 Suddenly, in one inspired swish of the magic wand of patriotism, the honourable minister has swept the room clean off the teacher. (Credit: Reuters photo)

One night I got out of my hotel room and went out for a walk around 11pm. What did I see? A horde of citizens out on the street, cleaning the thoroughfares, spick and span. Despite the handicap of language (Koreans speak English like Delhiwalas speak Malayalam. All the same, they communicate a lot in spite of language.) None of them looked the regular karmachari type. I asked them who they were and why they were working so late into the night.

They told me they were citizens from different walks of life. It was a matter of pride for them to keep their city clean. “Olympics coming!” one of them told me. “Seoul,” he tapped me hard on my chest, “is our soul”. (He obviously thought my soul flapped around inside my rib cage). "Our city, very clean."

They did not shout "Jai Seoul". They took the longer route. Their patriotism was not limited to their mouths. It made them get out and do something. It kept their roads clean, their faces radiant, their bodies sturdy and strong.

Let’s return to our innovative education minister of Madhya Pradesh. I watched him on TV announcing his innovative initiative. Hope you too have. You really missed something exquisite, unrepeatable, if you haven’t.

The honourable minister grinned from ear to ear. Glanced triumphantly at the admiring coterie around him. Swept his hands from north to south. His voice rose to an oracular pitch. Altogether, he seemed aureoled in secular apotheosis, while delivering his inspired wisdom to an overwhelmed audience melting into involuntary adoration.

We are, by and large, an unfussy people. Not sticklers to petty things like a minister of education having to have some rudimentary understanding of, a residual respect for education; or what happens in classrooms. Nor do we let students or teachers in schools weigh on our conscience. Even then, let’s take a little trouble, in this instance.

Let’s visit, boarding our bullet trains of imagination, one of the classrooms transformed by the minister’s inspired patriotism.

The school that we visit today has classes up to Class 7. Half the classes have no teachers. Most of the students have come trudging five to seven kilometres. Several of them had no breakfast. They look malnourished and hungry.

We choose a classroom, making sure that a teacher is available there. She begins the roll call.

“Chameli,” the teacher calls out.

She looks around, wondering: “Who is this new teacher, Jai Hind? A new teacher has joined the school or what?”

Bhagwati cannot be blamed. When the roll call is done, students are supposed to respond to the teacher. So, if it is not to her, Chameli must be responding to some other teacher.

Bhagawati looks around. Finding no one else, looks all the more puzzled.

Could this "Jai Hind sir" be floating in the air, like a kite controlled by the honourable education minister from Bhopal?

No, "Jai Hind sir" is nowhere in sight.

“Jai Hind” acquires an impersonal, hollow trill about it. It is addressed to none.

Roll call is meant for the student to respond to the teacher. (Presence without response is like election promises.) Even if this is routine, educationally this is valuable.

Suddenly, in one inspired swish of the magic wand of patriotism, the honourable minister has swept the room clean off the teacher.

Imagine the plight of the teacher. It is like this. You meet a boy or girl on the street. You are kindly disposed and inclined to enter into a conversation. You begin, “Son, what is your name?”

The little fellow stands upright and with all his strength shouts, "Jai Hind".

He obliterates your presence. You move on.

We hope to meet Chameli a few years later. When she will be all of 15 years of age. As per the custom of the village, she would be of marriageable age. A groom would be found. And let's imagine, the ceremonies are in progress. The groom is about to garland Chameli, who is understandably bashful. But her patriotic education stirs up within her, even as the garland is poised over her head. Any moment it could fall over and around her neck. The moment of moments in her life.

She takes a deep breath, clears her throat, musters her strength and, at the pitch of her voice, shouts, “Jai Hind”.