The forest is an intrinsic part of the old culture of the East Khasi Hills, and the very heart of the magic which shrouds Meghalaya.

Could a sacred forest be created from the magic of a witch? Could a witch know a place of earthly magic and summon forth the power which lies there?

Witches, they say, are the ones who can speak to the elements. They can tread the ground and hear what vein of life runs beneath. They can wield sparks of lightning from their own hands, and creatures of the wild listen to them.

The Sacred Forest is a wild and beautiful place. Trees which go back more than a 1000 years, ancient megaliths, sacrificial rock altars, hollowed-out tree trunks, slopes of moss and innumerable ancient plants cover the whole area. Rocks jut out here and there, and an ice-cold stream trickles through the base. As one goes deeper into the forest, the sky is blotted out by the thickening canopy of trees and strangely enough, the darkness shows more than does the cold glare of daylight.

About 25 km from Shillong lies Mawphlang — the famed Sacred Forest (Mawphlang) of Meghalaya. It is an intrinsic part of the old culture of the East Khasi Hills and seems to be the very heart of the magic which shrouds Meghalaya. The Khasi believe that this forest is the sacred shrine of their gods, and none who enter it may disturb it, or remove anything from within it. The original settlers of Mawphlang were the Blah community, who migrated from the Pnar area in Jaintia hills. They became the center of a growing community, but then arose a clan war, which was won by the Hima Mawphlang. The search then began for a new leader who would look after the welfare of all, but there was none they could agree on.

Then they came upon the Ka Khmah Nongsai, a woman known for her courage, her statesmanship and her strange understanding of matters even before they seem to have transpired. She was the wife of Lyhir Sohtun, and came from Baligaon in Assam but was living at Laitsohma, very near Mawphlang village.

In a culture already steeped in the lore of magic and witchcraft, she was said to be a mistress of the old tradition. Behind the façade of an ordinary but strong matriarch, there were stories of her magical abilities. Such was her power and wit that it is said even the Syiem of Shillong feared her.

When they went to her, she refused to don the role of the clan leader — but she said that if the Gods gave a sign, she would let her son be their leader.

To that end, she planted two saplings at a place called Phiephandi (some say it was three saplings). Lore has it that she believed that if the saplings survived for three years, her son was destined to be the chief of the Mawphlang. It would be a sign from the grove and of the deity which dwelt there.

At the end of three years, the saplings flourished and the son of Khmah Nongsai became chief, taking on the title of U Lyngdoh. 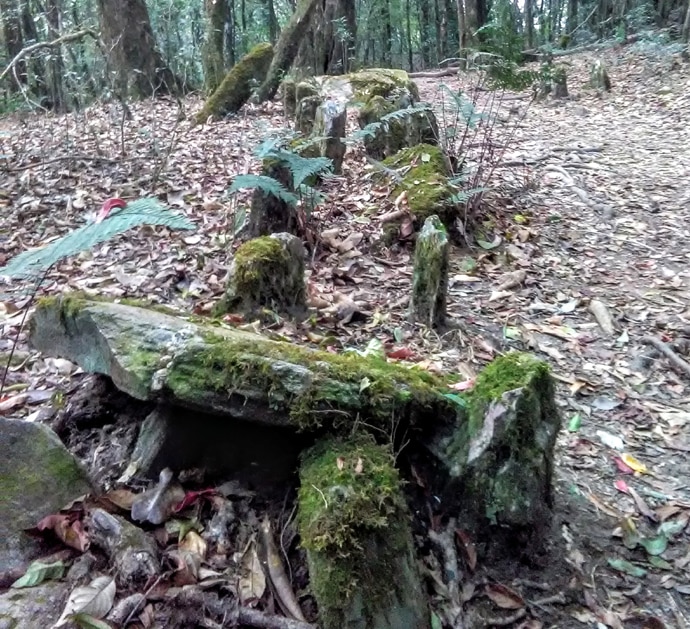 The forest is steeped in a culture of magic and witchcraft. (Photo: Deepta Roy Chakraverti)

The rock seats where the initiation ceremony took place are still preserved and exude an old power. It is whispered amongst many that Khmah Nongsai had consecrated the seat with magical words before her son assumed his role as chief. Many say she also walked through the forest the night before he would take his place, and with ritual and old words, opened invisible doorways set in the megaliths which studded the forest and in certain trees.

These were meant to remain as portals through which the guardians of this sacred land would traverse, and watch over her son.

He alone would know from her the secret places where these gateways opened and could go there in times of need.

Even today, there are places within the forest where sudden movement shows. In the stillness of the rocks and trees, one can see figures darting and peering. Through the carpet of leaves and moss, paths form and reform.

The pulse of life throbs deep within.

#Sacred forest, #Magic, #Wildlife, #Shillong
The views and opinions expressed in this article are those of the authors and do not necessarily reflect the official policy or position of DailyO.in or the India Today Group. The writers are solely responsible for any claims arising out of the contents of this article.