How Mahatma Gandhi made salt the sweetest thing for Indians

“With this, I am shaking the foundations of the British empire", proclaimed the Mahatma, raising a lump of salty mud on the morning of April 6, 1930. Remarkably, when he had commenced this 240 mile-long march to Dandi 25 days ago on March 12, along with 78 disciples from the Sabarmati Ashram, the British government had not anticipated that a pinch of salt could unsettle the mighty empire on which apparently the sun never set. 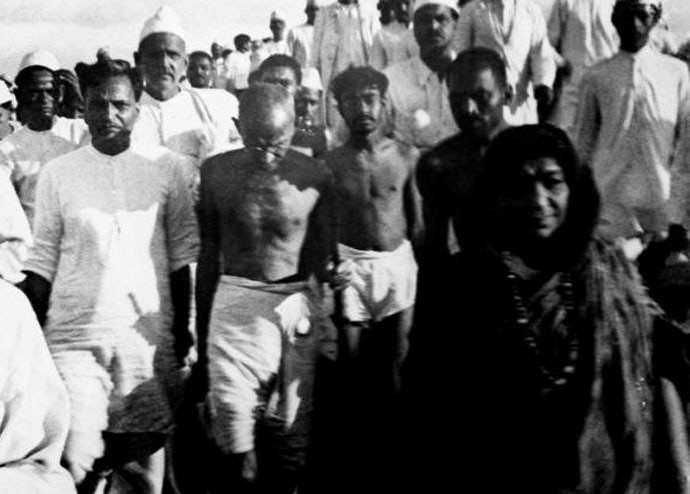 But that was Mahatma Gandhi, someone who could triumphantly capitalise on fasting as a means for protesting in a country plagued with hunger. The use of simple tools to achieve complex goals was the genius of this little man and the Salt March is without doubt a prominent example of his genius.

Ironically, the 61-year-old towering leader had become a laughingstock in the media when he announced the launch of the Salt Satyagraha. Most notably, The Statesman, a prominent British daily, wrote, “It is difficult not to laugh, and we imagine that will be the mood of most thinking Indians.”

In similar fashion, viceroy Lord Irwin also ridiculed the idea and reported back to London, “At present the prospect of a salt campaign does not keep me awake at night.” Perceiving it as innocuous, he rejected Gandhi’s appeal to fulfil 11 demands raised, one of them being the abolishment of salt tax.

This high-handedness of the British compelled the revered Mahatma to set off this historic march.

Strikingly, the British weren’t the only ones to underestimate the power of salt. The Congress Working Committee (CWC) had also cast similar doubts. After the Indian National Congress publicly declared it wanted 'Purna Swaraj' or complete self-rule on January 26, 1930, the CWC expected their leader to organise mass Civil Disobedience.

But Gandhi chose to fight against the salt tax instead. Consequently, prominent leaders like Motilal Nehru, Jamnalal Bajaj, Sarojini Naidu et al opposed it. Not to mention, even his right hand man, Vallabhbhai Patel and his political heir, Jawaharlal Nehru, failed to comprehend the choice of their teacher at the beginning. Only C Rajagopalachari, whom Mahatma Gandhi once called the keeper of his conscience, could appreciate the rationale behind this choice.

As conventionally seen, common people are least concerned with who their ruler is. Their prime concern remains their own livelihood, for which they can even compromise their freedom and that is why benevolent despots always remain immensely popular. Although these indelible lines from the Ramcharitmanas, “Kou hoye nrip humein kya haani” (whoever be the king, our condition is going to remain unchanged), were not true for either Manthara or Kaikeyi, they succinctly describe the disposition of the commonality.

Notably, Mahatma Gandhi first realised this during his stay in South Africa when he formed the Natal Indian Congress, to advocate for the rights of Indians in South Africa. While the merchants, colonial-era born Indians and the clerical class became members of the organisation, the unskilled wage-earners remained outside its pale.

Interestingly, the solution to this problem soon came knocking at the door of the young barrister. An indentured Tamil labourer named Balasundaram approached him for assistance. Helping this poor labourer made barrister Gandhi popular among indentured labourers, making the latter comprehend that to gain the attachment of the poor, one must take up their cause.

Evidently, without the support of ordinary Indians, Purna Swaraj would have merely become the slogan of the elites. Thus to link them to the freedom struggle, Gandhi chose to fight for what affected the common masses the most — salt is a commodity essentially used by everyone, even the poorest. As the Mahatma himself explained, “Next to air and water, salt is perhaps the greatest necessity of life.” Thus, this way he grasped the pulse of the common public. Mahatma Gandhi knew how to mobilise people. He truly was a mass leader. (Source: India Today)

Another feature of this march, which highlighted the acuteness of this mass leader, was the manner of protests. Choosing a long padyatra to Dandi, a town 240 miles away from Ahmedabad, enabled him to interact with and galvanise more people on the way. Moreover, its coverage also attracted wider publicity and generated interest in the masses.

In addition, he utilised this opportunity to address the prevalent social evil of untouchability. As expected from a leading intellectual, he was of the belief that along with pushing for more rights, society must also push for self-reform.

And the Mahatma would have been just Mohandas Gandhi, had he not practised his own beliefs.

Thus, to compel people to shed this atrocious practice, he bathed at a well belonging to the ‘untouchables’ at Dabhan and in Gajera, he refused to begin his speech until the audience permitted the ‘untouchables’ to join them. That way, the freedom movement started to appeal even to the historically oppressed classes.

Though this campaign itself didn’t succeed in emancipating us from colonial fetters, it laid a firm foundation for future endeavours for independence. All over India, people started opposing not only the salt tax but also the other unpopular laws. By breaking the salt law, they had tasted freedom. Now, they wanted nothing less than Purna Swaraj.

This is what this great soul had intended to achieve.

Mahatma Gandhi, through this march, enthused and changed the temperament of the common Indians, thus bringing one of the mightiest empires of all times on its knees with a mere pinch of salt.

Hence, it won’t be an exaggeration to say that while for the rest of the world the sweetest thing might be honey, but for Indians, it’s the salt.