DailyOh! Why Gandhi’s assassination trial was held at Red Fort

We break down the word assassination, from its origin to implication, for you.

Hope you are taking care of yourself. A lot of us are falling sick and that is happening despite taking care, so if you are sick, take extra care and loads of rest. We wouldn’t give you any medicine tips because we ain’t no experts on that. We definitely won't prescribe you any homeopathy dilutions a la the PIB. See your physician. We wish you speedy recovery. And if you are hale and hearty, we wish you continue to remain hale and hearty.

Today, as you would know, is a rather sombre day. Today is the day when 72 years ago, Mohandas Karamchand Gandhi was assassinated by Nathuram Vinayak Godse. The conspiracy to kill Gandhi had begun to take shape in December 1947. At its core were Godse and Narayan Dattatreya Apte. The trial went on for eight months — from May 27, 1948, to February 10, 1949, when Justice Atma Charan sentenced both men to death. But did you know that the trial was conducted in Delhi’s Red Fort?

So, the trial was held in a special court held under a single judge, who as we told you was Atma Charan. Now, let us tell you why Red Fort.

The trial, as you would know, was the first big trial of Independent India. Red Fort is a symbol that conveys India is an inclusive society. It was built on the orders of Mughal emperor Shah Jahan when he decided to move his capital from Agra to Delhi. You know in history, we always say so-and-so king or emperor built this or that. But they just order. Their vision is important, but then let’s not ignore the actual brains and hands that give shape to such grand visions. So, the design of the Red Fort is credited to architect Ustad Ahmad Lahouri. We do not have the names of those who gave shape to Lahouri’s design. History is unfair that way.

Anyway. We were telling you why Red Fort was chosen for Gandhi’s murder trial.

So, after Shah Jahan and Lahouri, and all those unnamed hands, built the Red Fort, it served as the palace of Shah Jahan’s capital Shahjahanabad. And then the British took over. Now, the British were largely Christians.

It is thus seen as a rather secular symbol. Gandhi’s assassination was a communal act. What better place to conduct the trial than Red Fort then?

We told you that this was the most significant trial of Independent India, but even before Independence, Red Fort had been used for trials.

The last Mughal ruler Bahadur Shah Zafar was also tried at Red Fort by the British, after the 1857 Indian Mutiny.

Did you figure out that we made a mistake in one of the lines above? Read again if you want to find it out yourself. If you don’t want to, we will tell you where we made the mistake. “We were telling you why Red Fort was chosen for Gandhi’s murder trial.” Gandhi was assassinated, not murdered.

You must already be aware that murder of an important person is called assassination. Now, we are all important in our own ways and for our own people. And then none of us, including the so-called important people, are important. That, of course, is on a philosophical level. In the practical world, some people are more important than others. For argument's sake, the philosophical world is also real world. But let’s avoid arguments — of all kinds. You know what we mean and thanks for that understanding. Let’s move ahead.

The word finds origin in the word hashishin. This is pronounced pretty much like assassin, but the sound of “H” stands out. If we don’t make sense to you, hear this:

Hashishin generally means ‘hashish eaters’. But it came to be used for a sect that lived in the mountains of Persia and Syria between 1090 and 1275. The sect spread terror by carrying out covert murders of Muslim leaders across the Middle East. Hassan-i Sabbah was the leader of this sect.

Now, generally, if a political or military leader of a country is murdered, it is considered assassination. But the leader of one country could be considered a criminal by another. Like when Iranian military chief Qasem Soleimani was murdered in a US-led drone strike, Iran considered it an assassination, but US and many other countries opposed to Iran called it a murder. Some called it a killing too, but they are wrong. The operational word in the difference between killing and murder is intention. If you kill with the intention to kill, you commit a murder. If you didn’t intend to kill but ended up killing someone then it is killing, not murder.

The US accepted it wanted to finish Soleimani, so even for the US, Soleimani was murdered, if not assassinated.

But princess Diana died. She died in a car accident. You might be wondering why we are suddenly talking about Diana. Today is neither her birth, nor her death anniversary. We are reminded of her because we came across a letter she wrote to her two sons Prince William and Prince Harry.

And we came across the letter because Diana’s former butler Paul Burrell released it. Diana trusted butler Burrell a lot. They say he was her close confidante.

As Harry, Meghan and Archie embark on a new life, I am reminded of some poignant words which Princess Diana wrote to me many years ago. They are a mother’s words of unconditional love which are as appropriate today as they were when she wrote them over 24 years ago. “I love my boys to death and hope that the seeds I’ve planted will grow and bring the strength, knowledge and stability that is needed.” #sussexroyal #kensingtonroyal #princessdiana #princessdianaforever #ladydi #ladydiana #herroyalhighness #princewilliam #princeharry #cambridge #royalfamily #harryandmeghan #dukeandduchessofcambridge #dukeandduchessofsussex #kensingtonpalace #buckinghampalace #englishheritage #burrellsbritain #royalbutler #dianaprincessofwales #queenofhearts #meghanmarkle #archieharrison #archieharrisonmountbattenwindsor

Say that out loud — Butler Burrell. Did you also have a trouble saying it? We found it to be a tongue-twister. Anyway, let’s not digress.

So, Burrell released the letter on his Instagram account and it is so sweet and emotional that we read it over several times. "I love my boys to death and hope that the seeds I’ve planted will grow and bring the strength, knowledge, and stability that is needed," it read.

We went all awww over it.

But then, there was this other letter that Burrell released some time ago that give the impression that Diana knew something bad was about to happen to her. Actually, she wrote two of them. One went to her lawyer Lord Mitchum and the other, of course, to butler Burrell.

In the letters, Diana wrote that she suspected the British Royal family and her husband were “planning her death” and that it would be “a car accident”. Burrell made the letter public after Diana’s death. Mitchum submitted it to the police.

The one that went to Burrell read: “I am sitting here at my desk today in October, longing for someone to hug me and encourage me to keep strong and hold my head high. This particular phase in my life is the most dangerous. [...] is planning 'an accident' in my car, brake failure and serious head injury in order to make the path clear for Charles to marry.”

Months after the letters were sent out, Diana died in a car crash, on August 31, 1997. A number of conspiracy theories started doing the rounds soon after.

In 2004, the police launched Operation Paget, which was a detailed inquiry into the car crash and the conspiracy theories. Operation Paget went on for years and cost millions of pounds.

There was no foul play. Diana’s driver was under the influence of alcohol and hence the accident.

We started on a sombre note and we have gotten back to a sombre one. But we can’t leave you at that.

So, we will take you back to yesterday when we spoke about the radiance of the colour yellow. If you missed it, you can read it here.

We told you that yellow is the colour of sunshine (among a lot of other things). And today, let us show you a picture of that yellow sun.

No, you don’t need to take your sunglasses out. 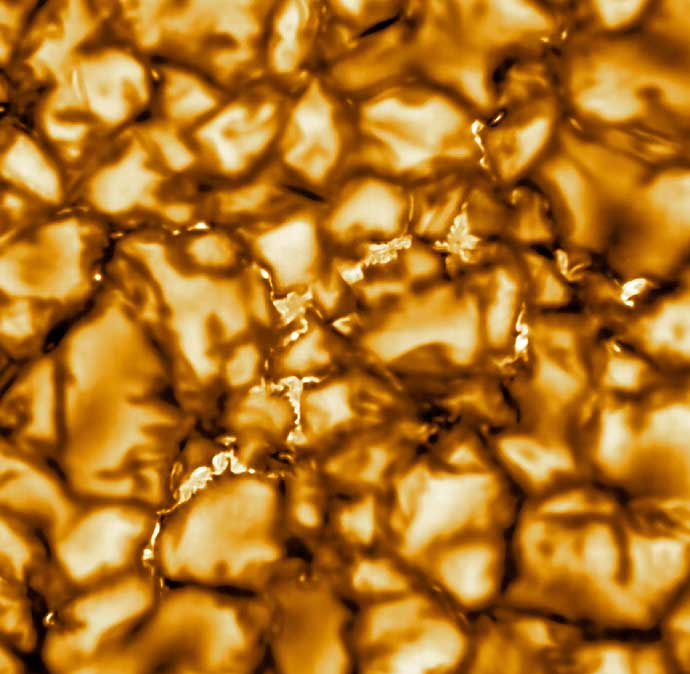 The surface of the sun. (Photo: Twitter/@NSF)

This is believed to be the most detailed image of the sun’s surface till date. What does it remind you of? Well, Desi Twitter has compared it to even chikki, and you can see some of those jokes here.

With the vibrancy of yellow in sight, we wish you a very happy Basant Panchami and the pink of health. And some sunshine.

Also read: DailyOh! The quickest death sentence in India to why wear yellow on Basant Panchami