Who has the right to decide if breastfeeding is acceptable, improper or criminal?

A case has been filed against Malayalam magazine, Grihalakshmi, for its cover which shows a woman breastfeeding.

A magazine cover recently featured a model breastfeeding a child with the caption “Don’t stare, we need to breastfeed” as a support to the "breastfeed freely" campaign. The photo showed the model staring into the camera with a child suckling at her bare breast. Little would have the publishers or the model imagined that this would result in a complaint under the Indecent Representation of Women (Prohibition) Act, 1986 on the allegation that the magazine cover photo contained an indecent portrayal of women.

The social media carries the views of many who consider the photo to be completely acceptable. Then there are others who term such exposure by the model of her breast as being in poor taste. Yet other consider it to be a question of propriety. Such difference of opinion is but natural in our society which is at different stages of transition. Interestingly, in 1980s Government of India had launched a postal stamp with a strikingly similar image and it did not offend anyone at that time. The real question, therefore, is whether the photo attracts criminality so as to justify the criminal complaint.

"Indecent representation of woman" is defined in Section 2 (c) of the 1986 Act as the depiction in any manner of the figure of a woman, her form or body or any part thereof in such a way as to have the effect of being indecent, or derogatory to, or denigrating, women, or is likely to deprave, corrupt or injure the public morality or morals. 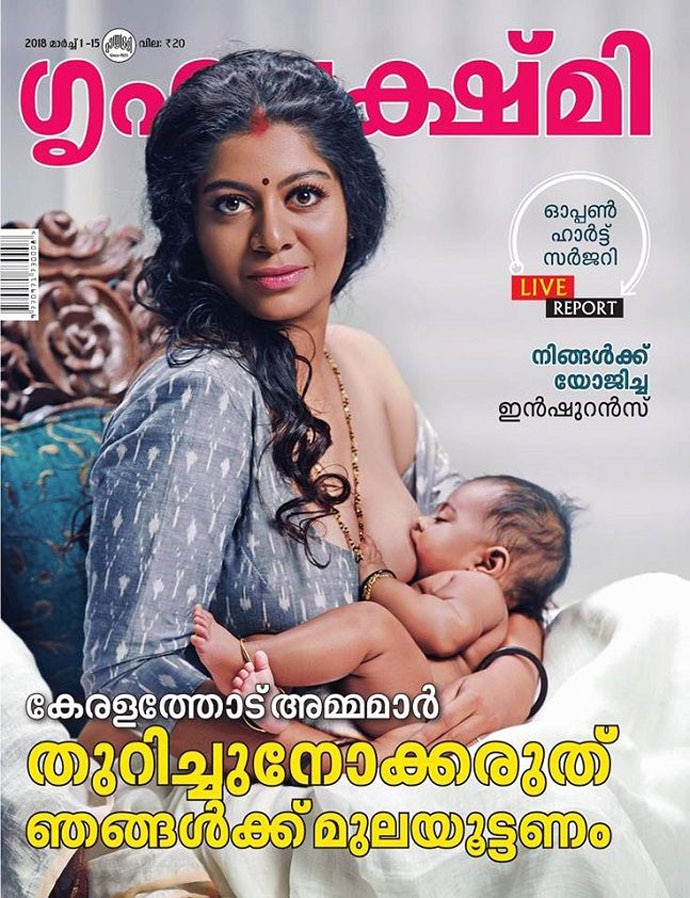 Surely, a portrayal of a woman breastfeeding a child could never be considered to be “indecent, derogatory to, or denigrating women” nor could it be “likely to deprave, corrupt or injure the public morality ormorals”. The objection appears to be to the visibility of the model’s breast.

It will be useful to recall here the test formulated by the Supreme Court in Aveek Sarkar versus State of West Bengal (2014), namely, whether or not a photo is indecent is to be decided upon viewing it in the background in which it was shown, and the message it has to convey to the public and the world at large. Moreover, through various decisions, the Supreme Court has held that nudity per se is not obscenity.

Applying this test, let us consider the background in which the magazine cover photo was shown, and the message sought to be conveyed.

Breastfeeding is the most natural and sacrosanct part of motherhood and is, undeniably, indispensable for the physical, mental and emotional development of a child. Medically, breastfeeding is associated with preventing neonatal deaths and deaths in children below five years. As per Unicef, if all children receive the benefits of breastfeeding 8,23,000 child deaths can be averted every year globally and in India, it can cause reduction of child deaths up to 156,000 every year, reduce over 3.4 million episodes of respiratory infections and 3.9 million episodes of diarrhoea in young children. Around 20,000 mothers’ deaths due to breast cancer can be averted with proper breastfeeding practice.

Even with such medical benefits to the children and the mothers, our country has failed to adopt the best breastfeeding practices and the reason can solely be attributed to our "culture" which stigmatises this act. It is considered to be a private act which ought to be performed in seclusion and the non-adherence to this silent rule is considered as moral depravity.

The public spaces even in the urban areas - such as public transport, restaurants, offices and hospitals - are not conducive for mothers to feed their children as they would inevitably be subjected to unwanted ogling, regardless of whether or not the breast is covered. The mothers are, therefore, forced to choose between the two options of either restricting all their movements by confining themselves to their houses; or resorting to supplements for their children - both equally disruptive of the growth of mothers and their children.

In order to capture the under-five mortality of children, the Ministry of Health and Family Welfare has launched a National Breastfeeding Promotion Programme - Mothers’ Absolute Affection (MAA) - to be monitored by the Unicef and Reproductive, Newborn, Child Reproductive, Maternal, Newborn, Child, and Adolescent Health (RMNCH+A) lead development partners.

The programme aims at targeting the mothers as well as their families to promote breastfeeding. The mothers are to be given extensive training on the best breastfeeding techniques by trained nurses and other facilitators and on the other hand, the programme is to communicate with the families to provide them with enhanced awareness and adequate information through mass media.

The campaign being supported by the magazine through its recent issue was a step forward towards realisation of the objectives of this flagship programme of the government. It was an attempt to create awareness to remove the social stigma attached to breastfeeding in urban public spaces. Since the magazine cover photo in question was published to support the "breastfeed freely" campaign and the message it wanted to convey was clearly captioned as “Don’t stare, we need to breastfeed”, it cannot be said to be indecent on the aforesaid test formulated by the highest court of the land.

Rather, such ventures must be lauded in order to make motherhood inclusionary for all the mothers and to encourage a culture of best breastfeeding practices.

It is essential to recognise and truly realise the right of each child to MAA.

#Kerala, #Grihalakshmi, #Malayalam magazine, #Breastfeeding
The views and opinions expressed in this article are those of the authors and do not necessarily reflect the official policy or position of DailyO.in or the India Today Group. The writers are solely responsible for any claims arising out of the contents of this article.