DailyOh! When Didi's surgeon called her strong, to Kareena's wish for her first-born

Mamata Banerjee reportedly got 18 stitches on her head without flinching or crying, in 1990.

West Bengal Chief Minister Mamata Banerjee is in the hospital, receiving treatment for injures to her ankle, toes and neck. How did she get injured? We don’t know. Neither does the Election Commission of India (EC). All we know is that she was injured while on a campaign trail in Nandigram yesterday. She has alleged that she was “pushed” by someone and it was a “conspiracy” against her. Eyewitnesses have alleged that she got injured after the car door slammed her leg. The BJP has alleged that Didi is creating a “drama” of being attacked as she is protected by Z-plus level security, and has demanded a CBI probe. The one with the power to order a probe is the EC, which has sought a detailed report from the police on the incident. 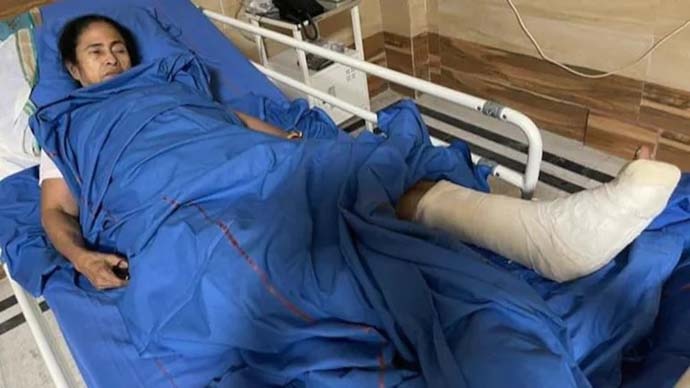 Life is unpredictable that way. A day ago, she was leading a padyatra to file her nominations, walking on the streets of Nandigram and the day before, she was serving chai to those around her. Today, she is hospital-bound — unable to walk for the time being.

Didi, however, is a strong woman. She has braved many injuries to in the past. Recounting one such incident, when she was attacked on August 16, 1990, while leading a protest rally, the surgeon who treated her lauded her grit. Dr Sankar Chatterjee, plastic and microsurgeon, who attended to her at SSKM Hospital — incidentally the same hospital where she is currently undergoing treatment — had mentioned in an interview that in 1990, she had suffered two severe blows on her head and had fended off the potentially fatal third blow with her left hand. She had to receive 18 stitches on her head, with only local anaesthesia. “When I was applying the stitches, she didn’t flinch or cry out even once, though I could sense it hurt despite the anaesthesia. At that time, I had no idea that she would take over as the chief minister of Bengal one day but I appreciated her grit and mental strength,” Chatterjee had said in the interview.

While we hope that the strong lady recovers soon, all her campaign-related programmes stand cancelled till March 14. Voters will have to wait as the TMC has also deferred its manifesto release schedule meanwhile. Didi has promised to return soon and said that she "will use wheelchair if needed" in a video message from the hospital.

TMC workers will wait for their leader to return, but the wait is finally over for Geeta, who has finally been reunited with her family in Parbhani, Maharashtra. Geeta, on October 26, 2015, soon after she returned to India with intervention by then External Affairs Minister Sushma Swaraj (File photo: India Today)

If you don’t remember her, we will jog your memory. Geeta had accidentally crossed over to Pakistan from India in late 1990s, as a nine-year-old with hearing and speech impairment. She was returned to India on October 26, 2015, after the intervention by the then External Affairs Minister Sushma Swaraj. After being lodged at various facilities run by NGOs, the now 29-year-old Geeta has finally managed to find her mother, Meena. But the confirmation of whether Meena is actually Geeta’s mother will have to wait for a DNA test.

Geeta’s DNA test will happen when it happens, but the probe in the Mukesh Ambani bomb scare case is happening in full swing. In yet another twist to the case, the National Investigation Agency has found that the Telegram channel — @jaishulhind — that claimed responsibility for parking the gelatin stick-laden SUV outside the Ambanis' residence, was created in Delhi's Tihar jail. However, the actual (little-known) terror group bearing the name Jaish-ul-Hind clarified that it had "no relation" with the incident. The probe, as we said, is in full swing. Mukesh Ambani's residence Antilia, where the car laden with explosives, was found on February 25. The NIA is investigating the case. (File photo: Reuters)

But what of the microorganism that has terrorised the world for well over a year now? We are, of course, talking about the coronavirus. One year ago, by March 11, 2020, the invisible terroriser had infected 1,21,564 people worldwide, leading to 4,373 deaths, when the World Health Organization declared the coronavirus disease, or Covid-19, a pandemic. The number of those infected and the deaths thereof have skyrocketed since, and Covid continues being a pandemic as of date. However, with the vaccine here, we are finally seeing an end to the bleakness. The latest addition to those who were jabbed is PM Modi's mother, who received the first dose of the Covid-19 vaccine today. In the latest addition to those who tested positive is the Indian football team captain Sunil Chhetri. The Covid situation is worrying across the country and the world, but the government is "very worried" about the prevailing situation in Maharashtra, says Dr VK Paul, Member (Health), Niti Aayog and head of the central government's taskforce on Covid-19. But when he made the movie Virus in 2019, director Aashiq Abu would have had no idea that the world would very soon look like scenes from his film. As we mark a year of the pandemic, we recommend you watch Virus on Prime Videos today. All the more reason to watch it, since you are probably enjoying the holiday from work for Mahashivaratri today.

Mahashivaratri is the festival dedicated to Lord Shiva and is celebrated on the 14th day of the Hindu lunar calendar month Phalguna. In the solar calendar, the month would be Maagha, but both correspond with the period between mid-February and mid-March in the Gregorian calendar. Various scriptures have various origins to the festival, and various reasons to celebrate. It finds a mention in several medieval era Shaiva texts and Puranas, including the Skanda Purana, Linga Purana and Padma Purana. While one says it is the night when Shiva and Parvati got married, the other dictates that this is the night when Shiva drank the poison from the churning of the milk ocean. Yet another one says that this is the night when Shiva performs the heavenly dance of creation, preservation and destruction. 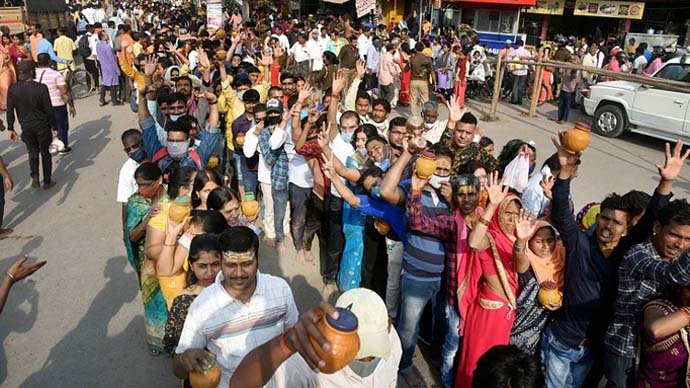 Devotees wait in queues to offer prayer at Vishwanath temple in Kashi (Varanasi) on the occasion of Mahashivaratri today. (Photo: PTI)

So what does Mahashivratri, our Word of The Day, mean? It is actually an amalgamation of three words — maha, Shiv and ratri. Maha in Sanskrit means great, Shiv being the governing deity for the festival and ratri in Sanskrit means night. While every month in the Hindu calendar has a Shivratri dedicated to Shiv, Mahashivratri is of a special significance. The festival is celebrated across the country, and with special aplomb in the major Shiv temples. Do know, however, that it is a festival not associated with feasting, but with austerity, fasting and a night of prayers without sleeping?

If you believe in prayers, stay up tonight praying. If prayers are not your thing, you can always stay up a little while to watch Virus. You can do as you please. It is a free country, after all. But remember to wear the mask and stay safe if you are going to a crowded temple. Prayers or no prayers, remember that the virus is still here and God only helps those who help themselves.

However, God will not help if you have committed a crime, even if you claim to be a godman. Interpol has issued a red corner notice against the self-styled godman, Virendra Deo Dixit, who has been accused of sexual exploitation and confinement of several girls in his fortress-like ashram in Delhi. The case came to light in mid-2017 when two complainants approached the Delhi Police about sexual and physical abuse of women at Adhyatamik Vishwa Vidyalaya in the Vijay Vihar area of North Delhi. The 79-year-old has been absconding since then and is suspected to be hiding in Nepal. However, that is not the note we want to leave you on. We want to give you reasons to smile and not frown. For instance, the adorable throwback pic and message that Kareena Kapoor shared of her niece Samiera, on the latter’s birthday. The recent-mother of Taimur’s baby brother wrote, “You call me BebooMA for a reason... cause when Mom says no you know who to turn to... always got you my girl...forever. Fly high, be happy and healthy ...I love you our first born baby Happy birthday Samuuuu (sic).” We can’t stop going awww at the uber-cuteness and the bond between the aunt and her niece. 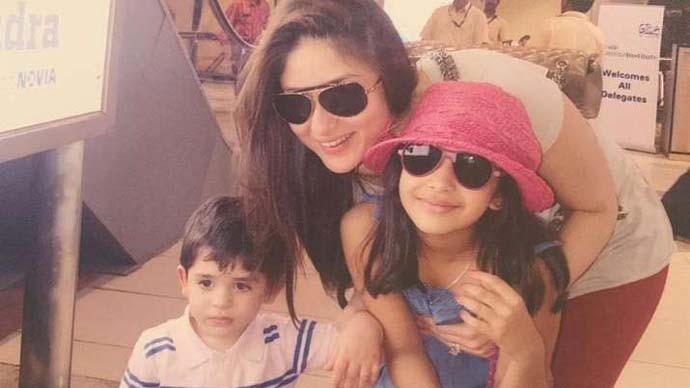 In more news from the world of films to make you smile, celeb couple Priyanka Chopra and Nick Jonas shared a video recorded at their London home to make a big reveal. What is the reveal? That they will be jointly announcing the nominations for the 93rd Academy Awards. The ceremony will be held on Monday (March 15).

We will try to bring you more reasons to smile tomorrow. But for today, it is a bye from us.

#Priyanka chopra nick jonas, #Kareena Kapoor Khan, #Mukesh Ambani, #Covid-19
The views and opinions expressed in this article are those of the authors and do not necessarily reflect the official policy or position of DailyO.in or the India Today Group. The writers are solely responsible for any claims arising out of the contents of this article.