Man says he is Aishwarya Rai’s son: Not the first weird claim made about a Bachchan

Kumar, who is from Andhra Pradesh, has claimed that he was born to Aishwary Rai Bachchan in 1988

Kumar, who is from Andhra Pradesh, has claimed that he was born to Aishwarya Rai Bachchan in 1988 in London, through IVF treatment. According to Kumar's claims, he was born to Rai Bachchan when she was 15 years old.

Kumar, who uses Rai as middle name, has not been able to produce any proof to back his claim. He does, however, present other “facts”, backed with information that seems to have been taken hurriedly from Wikipedia.

He says he spent the first two years of his life with Rai Bachchan’s parents in Mumbai. "I was born to her by IVF in London in 1988. I was brought up in Chodavaram from age three to 27. I was with my grandmother Brinda Krishnaraj Rai's family at the age of one and two in Mumbai. My grandfather Krishnaraj Rai died in April 2017, and my uncle's name in Aditya Rai,” Kumar told the media in Mangalore last week.

He has reasons for not having any proof of his illustrious parentage – his relatives destroyed all evidence. They also seem to be giving the young man other troubles: “I’m getting enormous headache and anger at my native place, most of my relatives have manipulated things since childhood, otherwise I would have come back to my mother before itself with clear information. Due to lack of information, I could not come to my mother, so now I got all clarity.”

However, he seems to have amazing clarity on the family affairs of his mother. “My mother got married in 2007 with Abhishek Bachchan and she is separated, living alone.”

Though he has never lived with her, his feelings for his “mother” are strong. “I want my mom to come and live with me in Mangaluru. It’s already 27 years since I separated from my family, I miss her a lot.”

Aishwarya Rai Bachchan, who is busy shooting for Rakeysh Omprakash Mehra's comedy Fanney Khan, has so far not responded to the call of her long-lost “son”.

Before this, in 2016, there had been a period when reports of Rai Bachchan’s suicide had set social media aflame. They apparently originating from a Pakistani website, which had claimed that the actor had tried to kill herself because her “in-laws had been troubling her over her intimate scenes with Ranbir Kapoor in Ae Dil Hai Mushkil”. Reports had claimed Aishwarya tried to kill herself because of harassment by the Bachchans.

While the website later updated their story to confirm that Rai Bachchan was, in fact, alive, the website's report had been quite detailed, even quoting a doctor who had “attended to” Aishwarya after she tried killing herself. The doctor had parted with the heart-rending information that Rai Bachchan had said, “Let me die. It is better to die than live such a pathetic life.”

The website had then also come out with an angry rejoinder to Indian media claiming the latter was the source of the rumour, saying “Indian media as always resorted to finding a name on whom they lay all the blame, and in this case, the name was Outlook Pakistan, just for one reason because we are from Pakistan. We can’t understand why the word Pakistan haunts Indian media so much.”

Before Aishwarya, it was Abhishek Bachchan who had a near-and-dear one turn up out of the blue. When the couple was getting married in 2007, a model and small-time actress, Jhanvi Kapoor, had slashed her wrists outside the Bachchans’ residence, claiming she was Abhishek’s wife.

Kapoor had claimed she met Abhishek during the shooting of Dus, when she was one of the dancers in the song Dus Bahaane. She had said they kept “meeting regularly” after that, and that Abhishek later married her in the presence of a few friends. She had no proof of the marriage because “when you love someone, you don't need proof”. 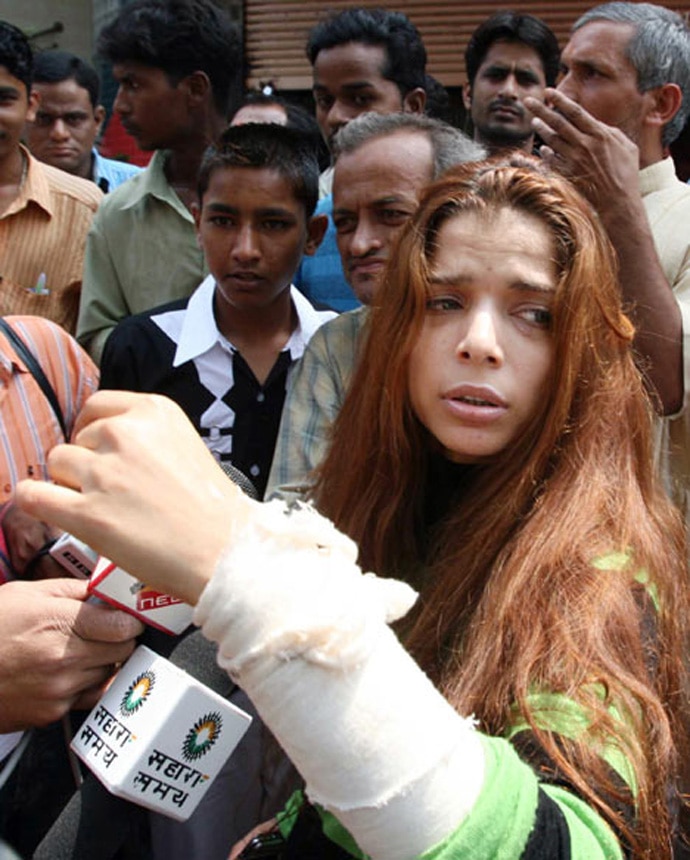 Jhanvi Kapoor had slashed her wrists outside the Bachchans’ residence on the day Abhishek was to marry Aishwarya.

Reports later claimed Kapoor’s real name was Naina Rizvi, and she had been married to one of the sons of Maulana Kalbe Sadiq of the Muslim Personal Law Board in Lucknow. She had denied this.

Last heard, Kapoor had turned into a sadhvi, and there had been rumours that she would enter Bigg Boss 11.

Not just the Bachchans, other actors too have had random people claiming familial ties. While a woman claiming to be Shah Rukh Khan’s mother had actually filed a court case demanding maintenance, a couple had claimed actor Dhanush was their son and even produced a Class 10 certificate to prove he had run away from home in Class 11. They had demanded Rs 65,000 per month as maintenance from the actor.

Both claims were defeated in court.

While the latest claim by Sangeeth Kumar is likely to be nothing more than a bid for publicity, it does show that Bollywood fans are capable of churning out stories as bizarre as the most dramatic flicks.