Man gets a pig heart transplant thanks to US doctors: The what, why, how

In a medical breakthrough worldwide, a genetically engineered pig's heart was transplanted into a human. What does it mean and why is it a great achievement?

A pig heart is transplanted into a human body: this might sound like a plot out of a sci-fi movie or a novel, but it is happening now.

It can be a life-saving breakthrough in a world that struggles with organ donor shortages.

57-year-old David Bennett Sr of Maryland, US with a terminal heart disease had exhausted all possible treatments. He was told that his body had become too weak to accept a human heart transplant. And so, Bennett decided to try the experimental procedure of getting a genetically modified pig heart transplantation.

It was either the experimental procedure for Bennett or death.

The surgery took nearly 8 hours to finish and was conducted at the University of Maryland Medical Center.

“It’s working and it looks normal. We are thrilled, but we don’t know what tomorrow will bring us. This has never been done before,” the New York Times quoted Dr Bartley Griffith, the director of the cardiac transplant program at the medical center, who performed the operation.

Doctors are still looking out for any abnormalities and the possibility of an infection post the surgery.

The procedure is called Xenotransplantation, which means infusing cells, organs or tissues from an animal or non-human source into a human. Scientists have been working on it for years. Already, pig heart valve transplants are being carried out. In fact, Bennett had himself received the transplant earlier.

While entire pig heart transplantation is a first, doctors had successfully transplanted a pig kidney in a human in October 2021, albeit the person was brain-dead. Before this, animal liver transplants, pig skin grafts, and more have been in use for humans, in the medical field. 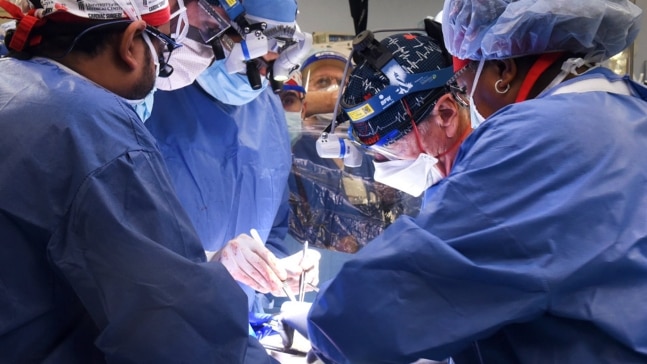 Such experimental procedures have also been carried out in the past. For example, in 1963-64, chimpanzee kidneys were transplanted into 13 patients. One of the 13 patients went on to live a normal life for almost 9 months before suddenly dying.

Scientists have also experimented with pig heart transplants in baboons. One of the baboons even lived for nearly two years.

However, mammalian bodies don’t like foreign objects inserted and the immune system fights tooth and nail in such cases. The primary obstacle for doctors in any transplant procedure, even that of human to human, is the risk of rejection by the recipient body.

That is why even in the case of the Maryland surgery, doctors had to genetically modify the pig heart to ensure the recipient’s body doesn’t reject it.

Now, we have been told that chimpanzees are humans’ closest living animal ancestors. However, in this case, a pig’s heart was transplanted and not that of a chimpanzee.

It makes the blood flow in a pig heart similar to that of the human heart. Pigs whose organs are used in medical procedures are grown separately using gene editing and cloning technologies so that their organs when transplanted aren’t rejected by humans.

This sounds like the storyline straight out of author Margaret Atwood’s novel Oryx and Crake. In the dystopian fictional story, humans grow pigeons or transgenic pigs bred to grow human organs for wealthy people, to battle the organ donor shortage.

Of course in the novel version, humankind comes under the attack of the pigoons – a human and pig hybrid. But in the real world, we probably won’t have to worry about a pigoon attack because scientists are not growing human brains inside pigs (we hope not, at least).

However, the procedure is expected to become a life-saver for many in the future, just like in the case of Bennett for now. It may be too soon for celebrations, but it is nonetheless a first breakthrough step.

#Universityofmarylandmedicalcenter, #Universityofmaryland, #Xenotransplantation, #Pighearttransplantintohuman
The views and opinions expressed in this article are those of the authors and do not necessarily reflect the official policy or position of DailyO.in or the India Today Group. The writers are solely responsible for any claims arising out of the contents of this article.