The so-called advocates of strays conveniently forget to think of those who are less fortunate — the homeless.

India is among the few “civilised” countries in the world, where stray dogs are not only tolerated but also encouraged — that too, under legal protection.

It sounds like paradise to an elite animal lover, especially to ones who do not have to walk on the road — those who live in gated colonies or multi-story societies. Therefore, The Stray Dog Menace, as it is called in Kerala, is not an upper-middle class problem.

They wear the best clothes, and in between their frequent Dubai and Bangalore trips and their time spent inside AC cars, rarely get to see a stray dog in real life. However, just because these privileged classes do not see stray dogs, does not mean they do not exist. 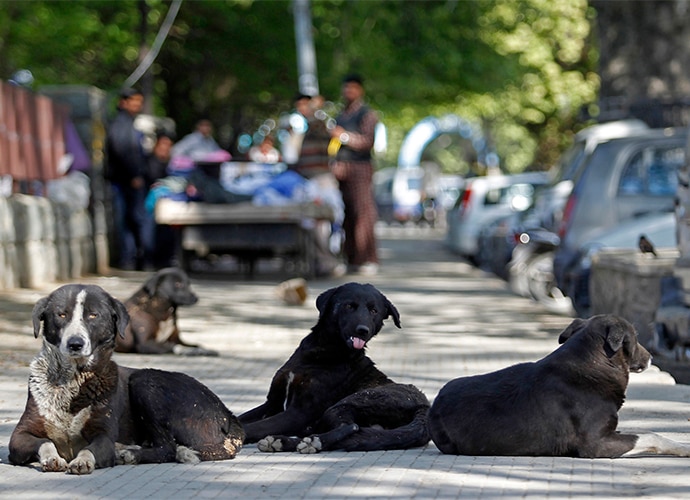 India is among the few 'civilised' countries in the world, where stray dogs are not only tolerated but also encouraged. [Photo: Reuters]

The density of violent strays in the state easily overthrows the usual count in cities such as Bangalore. I remember when I was working in Bangalore, those street dogs, the size of Alsatians — muscular and docile — crunching on Pizza leftovers, having the time of their lives — I adored them.

Nevertheless, it did not take me much time to notice a part of their ears missing, and some tagged with numbers. These dogs would not even bark at humans — not because they will not, but because they are afraid to. The same humans who took them to tag them have made sure these animals know who is in charge. Moreover, no one notices the slowly dwindling stray dog population in a city like Bangalore, because hey, “out of sight, out of mind.”

Now, cut to Trivandrum, Kochi, or Kozhikode. Stray dogs form packs and chase people, bikes and even cars! They fight territorial battles, generally in the night when it becomes difficult to sleep due to their high-decibel fights. They poop all over the place — pedestrian walkways, pavements! This is the plight of majority of us – the general people. Lean, mean small dogs, fed almost nothing, mostly due to the Malayali habit of not wasting too much food. And here’s the thing — most of these dogs are violent.

They are not the scarred, ear-snipped ones scared to submission (and fed pizza leftovers) like those in Bangalore, and these “Malayali” strays come in contact with children every now and then, in densely populated regions.

The so-called advocates of strays conveniently forget to think of those who are less fortunate — the homeless or those who live on street. Well-recorded and widely reported incidents of stray dog attacks occur, but they are conveniently ignored.

India reports considerable cases of fatal rabies every year — most of them are due to stray dog bites. According to a PTI report in August, a Supreme Court-appointed panel found that more than one lakh people in Kerala have been bitten by dogs in 2015-16. And to no one’s surprise, most of the victims are street children.

The so-called advocates of strays conveniently forget to think of those who are less fortunate — the homeless. [Photo: Reuters]

Spend a Sunday morning at the Trivandrum General Hospital at the clinic giving free rabies shots, and you will see; elderly people with ears bitten off and toddlers with chunks of meat taken away from their stomachs (this, I witnessed in front of me when I chanced by the hospital two months ago.)

It is usually Kerala’s lower economic strata that get affected. But the thing is, even with all the education, when a group of strays attack the kids you have, the adults you care for, and others in the neighbourhood at that moment in time, animal welfare goes out of the window.

Basil Bashier, who lives in Kozhikode, recounted an incident on Twitter recently. “We used to regularly feed dogs and cats after every meal. Recently one of [the dogs] started getting violent for some reason,” said Basil. “Children in the house [were] at risk.” According to him, the dog attacked the maid. Basil also mentioned that there was a kindergarten on his plot and the children there were at risk as well.

When asked what his thoughts on the same are, Basil tweeted, “I like dogs. But if it's human life at risk, I believe in culling them.”

So, when PTI reported that the Old Students Welfare Association of Pala-based St Thomas College claimed it will give gold coins to the civic authorities that kill the maximum number of stray dogs till December 10, they appeared as messiahs to the financially backward families in the vicinity. Their children could roam freely without having to fear anything.

Discount the political violence-fueled pockets (every state has those, so let’s be real?) and Kerala is a ruthless close-knit society where human life is valued over other things. So when the death of 65-year-old woman who was attacked by a pack of street-side dogs in the outskirts of Thiruvananthapuram triggered the mass culling of strays by the workers of Youth Front (Mani) party in Kottayam, rarely anyone in Kerala got affected because many were of the view that the deceased woman got justice.

These poor, affected souls have been asking the animal rights activists and Tamil actors who have been pushing their random bashing onto the media this question: "If you care so much, adopt them and take them in as your pets. But if we see one more stray about to attack a kid, we will cull it. So adopt them, care, do whatever. Just take it off our streets before we react."

And honestly, apart from totally venomous articles that somehow fail to mention the government's ABC measures and compensation/treatment to the affected, I am yet to see a proper movement here from the so-called activists and those clueless Tamil "actors" (like that Vishal person) to help the dogs off the streets, and thereby helping these poor people...

But that toddler, with a side of the stomach bitten off, is still fresh in my memory.

Also read - Kerala is no dog's own country

#Kerala, #Stray Dogs, #Animal abuse, #Maneka Gandhi
The views and opinions expressed in this article are those of the authors and do not necessarily reflect the official policy or position of DailyO.in or the India Today Group. The writers are solely responsible for any claims arising out of the contents of this article.