Killing Us All: Why Rs 25 lakh relief for man who killed himself in Maratha quota agitation could prove suicidal for India

In a country that faces large-scale poverty, monetising suicides could lead to disastrous consequences.

On July 23, a 28-year-old man named Kakasaheb Shinde jumped into the Godavari, demanding reservation in jobs and education for Marathas in Maharashtra. A rattled state government announced compensation of Rs 25 lakh for Shinde's family and also promised a government job to a family member. On July 25, at least two cases of attempted suicides were reported. also in Maharashtra. In the first case, a man tried to jump off a bridge and got seriously injured. In the other case, a man consumed poison and is said to be critical.

It is difficult to say if the compensation announced in Shinde's case could have prompted the other two suicide bids, but it must be understood that monetary relief for those killing themselves or threatening to kill themselves isn't sound policy.

In a country that faces large-scale poverty, monetising suicides could lead to disastrous consequences.

The state can't be held to ransom over any sort of demand, paralysing the policy making process.

The demand to provide quota to the Marathas has been questioned by the court because it has the potential to further push the upper cap of 50 per cent on reservations any state can allow. Maharashtra already provides 52 per cent reservations to various communities, including Scheduled Castes, Schedules Tribes and other backward classes.

The technicalities of the quota argument notwithstanding, there is always room for dialogue and peaceful protest — but no dialogue can hinge on the threat that a failure to reach a compromise/consensus would lead to suicide by either party.

More importantly, no government should compensate the loss of a family member who kills his/herself over unfulfilled demands because this practice threatens to lead to a string of suicides in a country where people are struggling to make ends meet. It is for this reason that compensation for the families of those claiming their lives over sundry demands can't be made to appear even an unwritten policy.

Governments in India are known to succumb to populist measures without thinking of the long-term consequences of such moves.

Facing suicide threats by people across Uttarakhand after transporter Prakash Pandey consumed poison at the Dehradun BJP office, chief minister Trivendra Singh Rawat in January said such threats were becoming a "fashion". While it is insensitive for a state head to call suicide threats a fashion, giving into these is not great statesmanship.

Pandey died on January 9 after consuming poison, allegedly over business losses following demonetisation and implementation of the Goods and Services Tax.

Pandering to them would have only resulted in more, not less, suicides.

In January itself, several women threatened to kill themselves if the government allowed the release of the Bollywood film Padmavat. 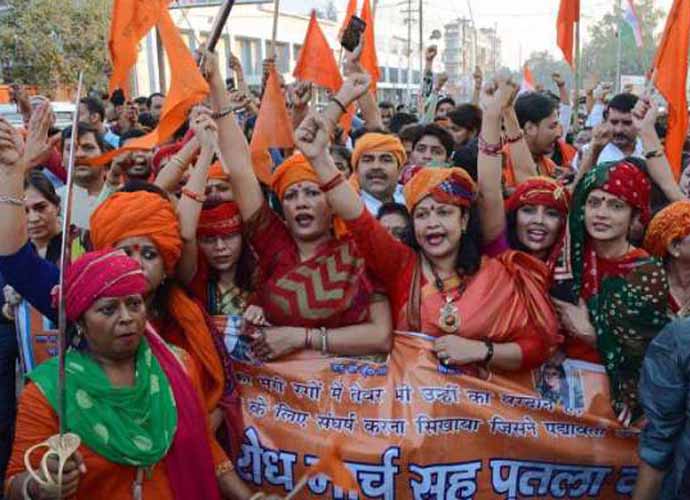 Threat of suicide by some women during Padmavat protests showed how bizarre agitations can get. (Source: India Today)

And this shows just how bizarre the situation can get if the state doesn't act tough when required.

However, the state must also be held accountable for not ameliorating the plight of the poor and destitute, leaving them in a situation so desperate where the only way they think they can help their families is by sacrificing themselves and letting the family claim compensation.

The fact that farmers in this country kill themselves in such large numbers is an example of state failure — but compensating these murders of the self is challenging the very idea of life.

Possibility of change and improvement in one's life exists only till the person is alive. The state is responsible for ensuring there exists an enabling environment for people to not lose hope in life. But there can be no reward for people killing themselves. Doing so, even on compassionate grounds, is an encouragement for more people to follow suit.

Also read: How Maratha reservation protest has caught Devendra Fadnavis in a trap