UP MLA says Mayawati 'worse than eunuch'. This shows how badly a Dalit ki Beti scares the BJP!

As Mayawati is back with a bang in 2019's political war, expect more abuse for a Dalit woman ‘who has forgotten her place’ — and sent her opponents into panic attacks.

BJP MLA Sadhana Singh on January 19 reportedly made a remark about BSP chief Mayawati — she said apparently that Mayawati had ‘sold her dignity for power’, that ‘a woman whose blouse, sari, petticoat had been torn was tainted and could never run for power’, and that ‘Mayawati was worse than a eunuch because she was neither man, nor woman’.

In one sentence full of frustrated bile, Sadhana Singh, the BJP's MLA from Mughalsarai, managed to insult not her political opponent, but eunuchs, survivors of sexual assault and women in general, in the crassest way possible.

Being a eunuch is not an insult. Being sexually assaulted is not a matter of shame. Singh was displaying only her own pitiable mentality when she made such remarks.

But where is such intense vitriol coming from anyway?

From frustration, impotent rage — and from pure fear.

Mayawati is a woman, a Dalit, a political fighter. And that rattles upper caste patriarchy like nothing else does.

After the 2014 Lok Sabha elections, many had gleefully written Mayawati’s political obituary. But she never really became insignificant. Now, joining hands with the Samajwadi Party, she has become a threat — the most potent one — to Sadhana Singh’s party.

The BJP is rattled, the BJP is cornered. And this fear, coupled with the intense antipathy casteist and patriarchal minds have for Dalits and women ‘who forget their place’, is coming out in the form of Sadhana Singh’s speech. 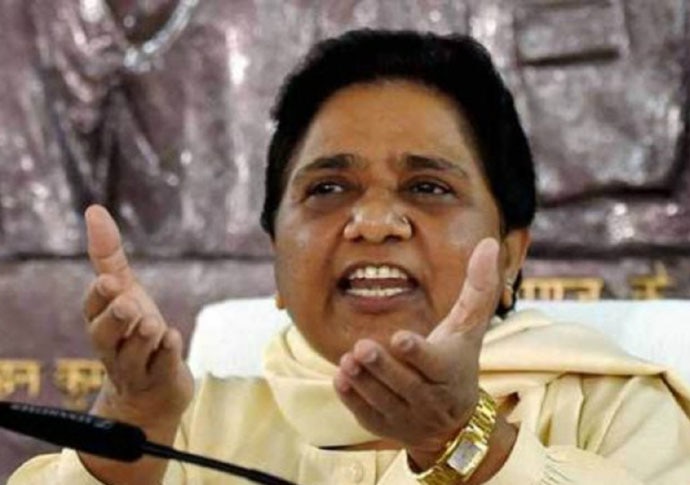 Mayawati challenges every entitled power structure. Of course, she is hated, and virulently so. (Photo: PTI/file)

More than 24 hours have passed since her comments. The BJP has so far not castigated her officially.

Sadhana was sent a notice from the National Commission for Women (NCW), but she has repeated: “I don’t regret my statement. A woman who is unable to protect her own dignity is a blot on womankind.”

Pankaj Singh, Noida MLA and son of Union home minister Rajnath Singh, was present on the stage when Sadhana made her remarks. He has so far not commented on the matter either.

Sadhana was presumably hinting at the 1995 ‘Guest House incident’, when some SP legislators had surrounded the guest house where Mayawati was staying, shouted casteist slogans, and assaulted her MLAs.

But Mayawati is hardly the first politician to join hands with opponents. Do we hear any other political alliance described in such crass terms?

No, such venom is reserved for women leaders — especially those who aren’t daughters of patriarchy, who owe their position to dynasties and 'old' money.

Sadhana Singh is not the first to make such remarks against Mayawati. In 2016, BJP leader Dayashankar Singh reportedly had said: “Mayawati is selling tickets like a prostitute. She gives tickets for Rs 1 crore and if there is someone who can give Rs 2 crore than she sells it for Rs 2 crore within an hour… She is even worse than a prostitute.”

In 2014, the very urbane, very polished BJP spokesperson Shaina NC (daughter of Nana Chudasma, prominent jurist and former sheriff of Mumbai), had smilingly said she apparently didn’t know if Mayawati ‘was a he or a she’. Shaina NC with her father Nana Chudasma. Shaina in 2014 apparently had trouble figuring out if Mayawati was 'a he or a she'. (Photo: Twitter)

As Mayawati comes back with a bang in the 2019 political arena, Sadhana Singh's will be just the first casteist, sexist abuse she will have to face.

The SOP here is simple: if you have to attack a woman, go for her ‘sexual purity’.  If someone you considered 'inferior' is suddenly an equal, sneer and mock at them.

Such remarks display the cruelty of entrenched entitlement, whether patriarchal, casteist or class-ist — all of which Mayawati challenges.

But they also show the panic of those making such remarks — which Sadhana Singh clearly betrayed.

As for the BJP, it needs to remember that vile misogyny is not ‘Beti Bachao’. Casteist abuse is not ‘Sabka Sath’.

If the BJP does not rein in its frustrated footsoldiers, the Dalit ki Beti could have the last laugh.

[Update: Sadhana Singh has now apologised. "I had no such intention to hurt anyone.... I regret what I said. I just shared a woman's pain, and didn't want to insult anyone," she said.]

#Dalits, #BJP, #Sadhana singh, #Mayawati
The views and opinions expressed in this article are those of the authors and do not necessarily reflect the official policy or position of DailyO.in or the India Today Group. The writers are solely responsible for any claims arising out of the contents of this article.