A special NIA court acquitted the former RSS man and four others accused in the case.

A special NIA court on April 16 acquitted five accused, including Swami Aseemanand, in the 2007 Hyderabad Mecca Masjid blast case for lack of evidence. Nine people had died and 58 others were injured when a pipe bomb went off at the historic mosque during Friday prayers. Five more people were killed in police firing to control the agitated crowd after the blast.

It was Aseemanand’s confessional statement that turned the course of the investigation. However, he later said the confession had been "coerced out" of him. 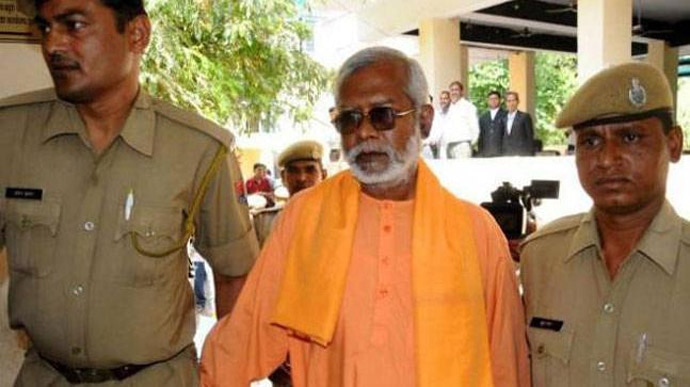 Swami Aseemanand had 'confessed' to the role of Hindu extremists, but later retracted. Photo: India Today

All five accused are members of Abhinav Bharat, a Hindutva organisation also linked to the Malegaon bombings of 2006 and 2008, the 2007 Samjhauta Express blasts, and the Ajmer Sharif Dargah blast that took place in the same year.

The Mecca Masjid blasts have often been called the first instance of the much debated "Hindu terror" in India. The acquittal has set off a fresh political tug of war, with leaders like Congress’s Ghulam Nabi Azad, CPM’s Brinda Karat and AIMIM’s Asaduddin Owaisi accusing the National Investigation Agency (NIA) of failing to get victims justice.

NIA is a deaf & blind TOTA they didn’t appeal against bail given to accused ,witness turned hostile after June 2014 IO couldn’t give proper statement so everything was done to fail the victims upshot is our fight against terrorism is weakened after Today’s acquittals https://t.co/fHnEMisqkE

#MMasjid Blast case verdict - Justice has not been done ,NIA & Modi govt didn’t even Appeal against Bail that was given to Accused within 90 days this was a complete biased investigation which will weaken our resolve to Fight Terrorism ,MMasjid 9 people died many injured

# MMasjid Blast case verdict majority of witness turned hostile after June 2014 ,NIA didn’t pursue the case as expected from it /was not allowed by "Political Masters"Qs is what will be left of Criminal Justice system if such biased prosecutions continue Justice has nt been DONE

BJP’s Subramanian Swamy, meanwhile, read a larger design. He said the prime minister should now institute cases against Congress president Rahul Gandhi and former finance minister P Chidambaram for defaming the Hindu community with the "saffron terror bogey" and trying to engineer a "Christian rule with help from Muslim nations" in India.

I had expected it. All the pieces of evidence were engineered, otherwise, there was no Hindu terror angle: RVS Mani, former Under Secretary, Ministry of Home Affairs on all accused in Mecca Masjid blast case acquitted pic.twitter.com/d8lDnqE5cG

Investigation against another two, Tejram Parmar and Amit Chowhan, is still on.

Gupta, acquitted in this case, was sentenced to life in jail last year for the Ajmer Sharif dargah blast. Swami Aseemanand was acquitted in that case.

The blast ripped through the mosque during Friday prayers. Photo: Wikimedia Commons

In the immediate aftermath of the Mecca Masjid blast on May 18, 2007, the Hyderabad police picked up more than 30 Muslim men on suspicion. Some of them later alleged torture in custody. Amid uproar that the police was trying to frame innocent men, the probe was handed over to the CBI in June 2007.

The CBI came upon the role of Hindu right wing organisations from one unexploded Improvised Explosive Device found inside the mosque, and arrested Gupta and Lokesh Sharma. In 2011, the NIA took over the case.

However, the major twist in the case came in 2010, when Aseemanand, apparently moved by the plight of framed, innocent Muslim men, decided to come clean about the role of Hindu extremists in the blast. His statement, recorded in front of a judicial magistrate at Delhi's Tis Hazari court, accused not fringe organisations, but RSS national executive member Indresh Kumar, for handpicking and financing pracharaks to carry out terror attacks.

Tehelka, which had accessed this statement, quoted Aseemanand as saying: "Sir, when I was lodged in Chanchalguda district jail in Hyderabad, one of my co-inmates was Kaleem. During my interaction with Kaleem I learnt that he was previously arrested in the Mecca Masjid bomb blast case and he had to spend about oneand- a-half years in prison. During my stay in jail, Kaleem helped me a lot and used to serve me by bringing water, food, etc for me. I was very moved by Kaleem’s good conduct and my conscience asked me to do prayschit (penance) by making a confessional statement so that real culprits can be punished and no innocent has to suffer."

"Indreshji met me at Shabri Dham (Aseemanand’s ashram in the Dangs district of Gujarat) sometime in 2005... He said he had deputed Sunil Joshi for this job (terror attacks) and he would extend Joshi whatever help was required."

Joshi was shot dead in 2007. Sadhvi Pragya, one of the accused in the 2008 Malegaon blasts case, was tried for his murder, but acquitted in February 2017.

In March 2011, Aseemanand said his confession was forced out of him by the investigative agencies, that it was "involuntary" and made "under duress".

In November 2016, four important NIA witnesses turned hostile. The investigation agency had said Gupta and Joshi had used the mobile phones of these four Madhya Pradesh residents to contact each other, but the men denied this in court.

Owaisi has accused the NIA of shoddy probe, and said the agency did not "even challenge" bail given to some of the key accused during the trial.

While the verdict will renew the "saffron terror" debate ahead of Assembly elections in several states, for now, no one is responsible for the blasts that led to the death of 14 people.