Meera vs Meera, in search of the real Meera: Book Review

Who is Meera Bai? For most of us who were introduced to this saint-poet/queen back in Class 6 History, we know Meera Bai as the queen who devoted her entire life to Lord Krishna and sang love paeans to him. For the ones who went beyond that preliminary idea of Meera, this person has more often than not been treated as a mystery. That interpretation served the West well - to look at Meera through an Oriental-exotic lens of intrigue and thereby rob her of her human qualities. But is Meera only that idea? Is there nothing more to her than her poems, and the perception of those poems? 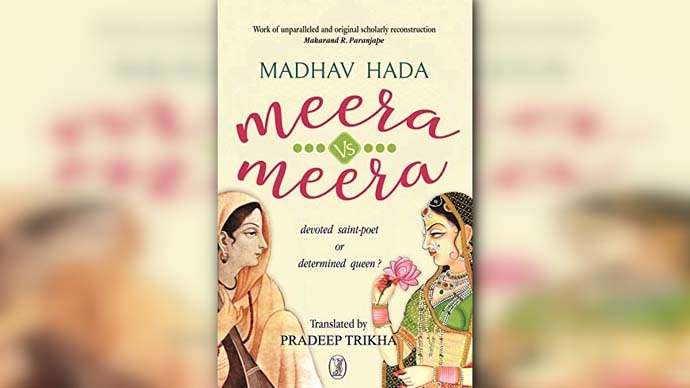 "For centuries," the book goes, "oral narratives keep on rolling like pebbles in a river. Their shapes may change but their nature remains the same. Likewise, Meera's poetry has been passed down and evolved across generations, but it does inherit elements of its original version. Similarly, biographical details obtained from these poems and harjas may not be perfectly reliable but they are not entirely false. By aligning these 'clues' with available historical facts, we can arrive at the truth."

But arriving at the truth is a difficult, if not impossible, process. The idea of Meera has been passed down generations like those pebbles in the river that the author refers to. In these centuries since Meera's birth and death — and there's no consensus on even that — she has taken on many forms; many interpretations.

Meera was married to Bhojraj, one of the seven sons of Rana Sanga, the ruler of Mewar. Rana Sanga's ascension to the throne of Mewar was in 1509, and seven years later, in 1516, his son Bhojraj was married to Meera. Meera's marriage to Bhojraj helped strengthen the alliance between Mewar and Merta, and Merta thereafter was an un-ignorable part of all of Mewar's campaigns. Meera's husband, Bhojraj, died sometime between 1518 and 1523. The internal skirmishes that plagued Rana Sanga's family after the death of Bhojraj had a mighty impact on Mewar. Meera, however, might have chosen to keep herself out of these battles. She had a firm loyalty to Rana Sanga; and her decision to not take sides in the family battle also had her brothers-in-law, Ratan Singh and Vikramaditya, constantly and persistently at her throat.

Meera was also caught in this inner-quarter crossfire, especially after she refused to commit sati. "Meera is drenched in colours of the Lord and no other shade affects her. / She would sing in his praise and will not commit sati," wrote the widow of Bhojraj. The refusal pushed Meera further into isolation. She then sought refuge in devotion. The numerous attempts by Vikramditya to poison her went in vain. Meera, she wrote in her poems, "drank the poison as a divine nectar".

While historians across years and spectrums have attempted to define Meera in their own way, most of them have overlooked some part or the other of this person's persona. In most, it is Meera's poetry that defines her. But was that all to Meera? This fierce, self-determined queen was also a rebel. From the stree dhan given to Meera by her parents, and the estates of Pur and Mandal of Mewar bequeathed to her by Maharana Sanga, Meera had an ample amount of wealth to distribute among saints and devotees. She was also acutely aware of her womanly passions and never felt the need to conform to the norms chalked out for her by society. But having said that, Meera was also the creation of the society she lived in.

Meera believed 'soney kaat na lagey — gold never rusts'. Author Madhav Hada and translator Pradeep Trikha shovel out this gold from beneath the decades of limited interpretations — if not misinterpretations — of Meera. The immortal heroine, the Bhaktan, the queen. And above all, the woman.

Also Read: What the story of Mirabai can tell us about Rajput 'honour' that Padmavati can't