These are pristine forest areas conserved for centuries by local tribes as abodes of their deities.

Meghalaya is known to have some of the wettest places on the planet — Cherrapunji and Mawsynram — which attract tourists and onlookers. However, perhaps the best kept secret of the state is its sacred groves — forest patches traditionally protected by communities — spread in the hill districts. These are pristine forest areas conserved for centuries by local tribes as abodes of their deities.

People believe that even plucking a flower or a nut from these groves could earn the wrath of gods. In the age of climate change, these sacred groves have become models of conservation for the world and are earning carbon credits for tribal communities.

While sacred groves in Meghalaya are relatively well preserved, open forest areas and other community forests are facing stress similar to those in rest of the country — deforestation, quarrying, forest fires, construction of development projects, demand for firewood and timber.

Despite being one of the wettest places globally, the communities here are experiencing increasing ‘dry season drought’ due to loss of dense forest. This, coupled with the increase in temperature, is disrupting the hydrological cycle of the watershed and impacting farming operations.

There is soil erosion and downstream flooding too. Climate change is increasing the intensity and extent of dry season ground fires, reducing soil moisture and rainfall and leading to biomass loss. In such a situation, sacred groves stand out.

In a unique initiative, the tribal communities that have legal rights for forests in Meghalaya under the Sixth Schedule of the Constitution, decided to use their traditional knowledge and wisdom of preserving sacred groves to rejuvenate other forest areas. 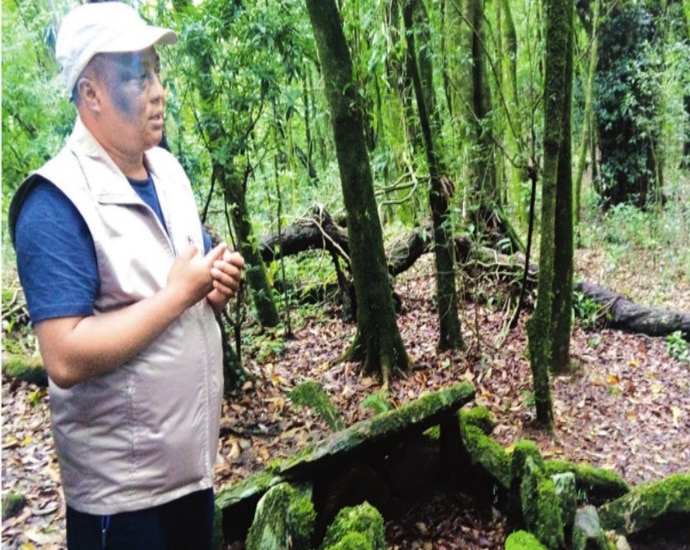 The initiative, which started in 2013, has started bearing fruit. By blending their knowledge of natural resource management with modern forest management and regeneration techniques, Khasi community organisations have started rejuvenating forests, preventing forest fires and reducing firewood demand through use of LPG and fuel-efficient smokeless chulhas.

Taking advantage of a mechanism called ‘Reducing Emissions from Deforestation and forest Degradation (REDD+)’ devised under the UN climate change treaty, Khasi communities have been able to earn car bon credits for their conservation work.

The project engages 10 indigenous Khasi governments (hima) with 62 villages and small hamlets in the East Khasi district. “We are children of forests. For us, forests are everything. We have to protect them for the future at any cost,” said Tambor Lyngdoh, secretary of the Umiam Mawphlang Welfare Society, which runs the project, while guiding us on the narrow trail inside the Mawphlang sacred forest — one of the most well preserved forests in the East Khasi district.

The relic forest is extremely rich in biodiversity and floral growth. The high rainfall makes it a mixed evergreen forest with abundant oaks and chestnuts as well as medicinal plants and bird life. “Over centuries, we have learnt how to preserve forests and live in harmony with nature.

We are using the same knowledge to rejuvenate degraded forest areas, stop deforestation and minimise forest fires,” said Lyngdoh. He said he opposes hosting mega cultural events, like the ‘slow food festival’ some years ago, near the sacred grove.

#Soil Erosion, #Climate change, #Sacred Groves, #Meghalaya
The views and opinions expressed in this article are those of the authors and do not necessarily reflect the official policy or position of DailyO.in or the India Today Group. The writers are solely responsible for any claims arising out of the contents of this article.