Veteran actress laid bare hypocrisies of the president-elect, and underlined responsibilities of Hollywood and the press.

The name synonymous with wondrous and prodigious acting talent, countless nominations and awards, and a prolific performance spanning over 40 years in Hollywood, Meryl Streep, accepted a lifetime achievement award at the Golden Globes and stunned the audience with a rousing speech.

Lasting a little above six minutes, Streep’s speech was a searing lament for America’s pitiable plight, especially the erosion of its renowned democracy in electing a demagogue to the highest post of the land. She was, of course, referring to Donald Trump, but like any decent human being, refrained from name-calling.

Saying that the most “vilified segments in American society now are Hollywood, foreigners and the press”, Streep expressed how she has lost her voice because she has been shocked and horrified at someone’s (she meant Trump) ability to mock a disabled reporter at one of his campaign speeches.

Streep listed out a string of Hollywood celebrities and famous actors, and noted that their birthplaces are varied and hardly even in the American soil itself. People from different US states, as well as countries like Canada, Ireland, Israel, Ethiopia, India, Kenya, Pakistan, Mexico, Colombia, England, China, Australia and even Russia have made their mark in Hollywood, and Streep underlined that without its eclectic mix of people of various skin colours, religions, languages and even countries of origin, Hollywood would only have “football and mixed martial arts”.

"Hollywood is crawling with outsiders and foreigners and if we kick them all out, you'll have nothing to watch but football and mixed martial arts, which are not the arts," she said to thundering applause.

She said, in a wonderful and telling line, that: "An actor's only job is to enter the lives of people who are different from us and let you feel what that feels like. And there were many, many powerful performances this year that did exactly that – breathtaking, compassionate work."

Trump’s bullying from the pulpit

Streep also added that it was the real life performance that sanctioned prejudice and allowed for violence and bullying that affected her the most. 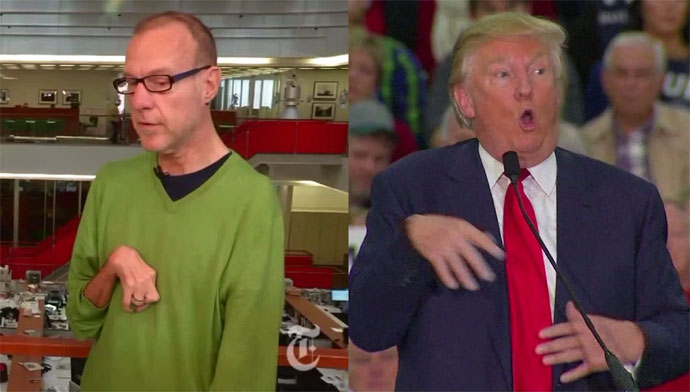 "The person asking to sit in the most respected seat in our country imitated a disabled reporter, someone he outranked in privilege, power and the capacity to fight back."

“There was nothing good about it." She added, "The person asking to sit in the most respected seat in our country imitated a disabled reporter, someone he outranked in privilege, power and the capacity to fight back."

It was this stark inequality and the stinging charade of a man voted in to power by the dint of his base flattery emotions stemming from bigotry, racism, lack of compassion and absolute manipulation of public sentiments that “broke [her] heart”, Meryl Streep said.

"It kind of broke my heart when I saw it and I still can't get it out of my head because it wasn't in a movie, it was real life," Streep said. "This instinct to humiliate when it's modeled by someone in the public... by someone powerful, it filters down into everyone's life because it kind of gives permission for other people to do the same." She added: "When the powerful use their position to bully others, we all lose."

Responsibility of the press

Even as the actors and actresses in the audience were moved to tears, particularly the likes of Kerry Washington, Viola Davis (who was on the Dais), Ryan Gosling, Chiwetel Ejiofor, et al, Streep outlined how important it is that the “responsible press” is safeguarded and journalists committed to the truth and those “holding power to account” are protected.

Streep asked the “well-heeled” Hollywood press and the audience to become a part of and help out in any way they can the Committee to Protect Journalists, an international platform for press freedom and rights and protection from violence of the powerful.

Celebrities, fellow Hollywood personalities and more or less everyone on Twitter are super impressed with Meryl Streep’s no-nonsense speech and warning of the dark times ahead.

She even paid a tribute to Carrie Fisher in these words: “As my friend, the dear departed Princess Leia, said to me once, take your broken heart, make it into art.”

My daughter and I just watched the #MerylStreep speech together, both with lumps in our throats. 1/

There has never been anyone like Meryl Streep. I love her. #GoldenGlobes

find someone who looks at you the way literally everyone looks at meryl streep pic.twitter.com/ClnOwFsX02

LOLing hard at all the Bollywood people who will say WHOA RESPECT MERYL STREEP, but won't speak up against Raj Thackeray here.