India can stop worrying about its poor. They will be back to build our cities when this is over

Why should the poor demand anything more than two meals a day?

When Donald Trump came visiting in February this year, India hastily built a wall, 1,640 feet long and seven feet high, in Ahmedabad, across which it hid the poor so that our guest’s experience of his first-ever India visit would not be spoilt at the sight of squalor.

About a month after the guest had gone back home, India is engaged in a project to hide not just those who live in abject poverty, but also those who helped build that wall in Ahmedabad.

From Gujarat, to Kerala, to Maharashtra, to Delhi, to Uttar Pradesh, we are engaged in an attempt to hide millions of people. People who build our homes, our offices, our hospitals and our malls. People who pull our rickshwas, people who push our carts around. 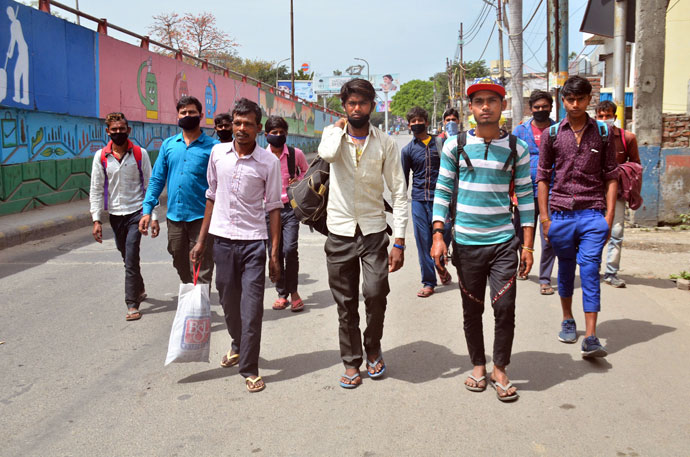 India is currently engaged in an attempt to hide millions of poor. (Photo: PTI)

Only, this smug India does not realise, it can no longer hide them. When many of those believing - and even those deriding - the leadership of Prime Minister Narendra Modi shut themselves in their homes, one of India’s greatest ever human tragedies began to unfold.

As people, part of faceless and nameless crowds, started walking back home, some had the first ever realisation about the numbers of migrant labourers whose existence we remained oblivious to under flyovers and on footpaths as our cars whizzed past them.

The Prime Minister in his first address on March 24, sharp at 8 pm, did not tell them what to do, where to live, what to eat, even as he told us to clap our hands and clang our plates. India had no plan for them during the coronavirus crisis. This is just one part of the truth. The second part is that India never had a plan for them.

Every big event in India has seen migrant labourers being told to not sleep on pavements lest the foreign delegates see them. They have been herded away from footpaths but are never told where they should go. Many are worried economic activity, post this disaster, will not pick up instantly because the migrants won’t come back soon enough. The good news for them is that despite how cities have treated them, they have always come back, each time in greater numbers. 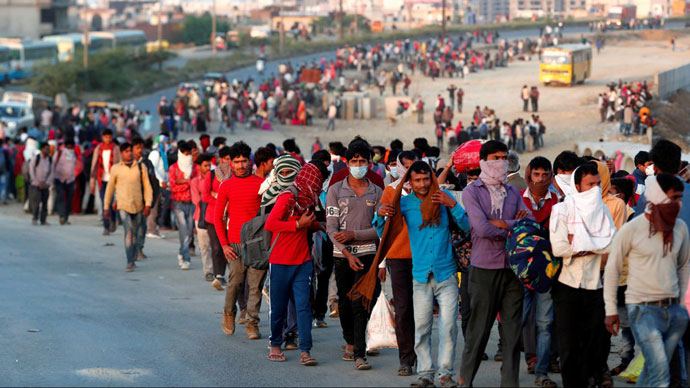 The migrant labourers would be back in our cities when this is over because they have nothing to do back home. (Photo: Reuters)

Migration, ironically, is the only means of survival for people from regions that face repeated cycles of floods and rainfall shortages.

According to the agriculture census, the total number of operational holdings in India numbered 138.35 million with an average size of 1.15 hectares. Of the total holdings, 85 per cent are in marginal and small farm categories of less than 2 hectares. As per the census, 91 per cent of the total farm holding would belong to small and marginal farmers by 2030. Smaller land holdings expose them to greater risks from floods and dry monsoons. Many such farmers come from villages to cities for mere survival. And then are scores of people who have no land and work as farm labourers.

The Economic Survey 2016-17 had estimated that at least nine million people migrate annually within the country, most of them in search of work.

All of them look to cities for work and income. When tragedies strike, cities look the other way from them.

Over half of India’s daily wage and migrant population earns just Rs 200-400 a day. That is much below the prescribed minimum wage of Rs 692, Rs 629 and Rs 571 for skilled, semi-skilled, and unskilled workers respectively (in Delhi).

In Mumbai’s Bandra region, thousands of people came out on Tuesday. The police did what the police do with the poor; lathicharge. How else does the police control a crowd? Not too long ago, a far greater number of people had turned out at Delhi’s Anand Vihar terminal.

Huge crowd of migrant workers in Bandra, Mumbai a short while ago demanding permission to go back to their home villages. Lathi charge too. #Lockdown2 pic.twitter.com/ZPHlCTCJlP

The privileged sat at home to discuss if this was part of a larger conspiracy or a natural outpouring of frustration. Was it the Centre to blame or the state government to fault? For the poor to agree to be part of conspiracy too is an act of desperation. None of us would come out of our homes to risk a coronavirus infection. The poor, lest we forget, are already out.

The governments are appealing to one section of India to stay where they are because the government will bring them food. Another section is bored with too much of Netflix and Amazon Prime, eating a meal without misthi and machhli, sleeping too much with no run to the gym possible.

The poor have no power to demand better from the government. The privileged are too caught with ideological debates to care about what governments do for the poor.

There was no plan in place for the poor stranded across India. The rich came back in chartered flights. The government allowed those flights, but it couldn’t allow a few trains to take the migrant labourers back home.

Modi wants credit for India having acted in time enforcing the strictest lockdown across the world, as a mark of his decisive leadership. This strictness has also crushed the spirit of India’s poor and the government has been caught napping without a plan for them.

Not one before the pandemic outbreak, not one after it happened.

Many concerned Indians are worried if ‘these people’ are allowed to go back home, they may carry the infection back to villages and it would be impossible to control the outbreak there.

Excellent, that there is a realisation about the state of rural healthcare. But when people who got the disease from abroad were allowed into India, why can’t ‘these people’ be allowed to go back home? There should have been antibody blood tests as a larger plan to send them back home. This should have been in place from Day 1.

Even today, we have no such plan. We are in Day 22 of the government-declared lockdown. We are in Day 1 of the second phase of this lockdown. But why should the poor demand anything more than two meals a day? If one of those meals doesn’t reach them, they should have faith, it will reach at some point. This is India’s unsaid message for its poor.

But we must not worry. When we open our cities again, we will find the migrant labourers here, foraging for work in cities that do not even know of their existence.

Also read | Home, away: Fear and longing in Noida