The government has been unable to provide makeshift accommodation or organise basic transport to return the migrant workers home, in keeping with the mandate of #StayAtHome.

Let us be entirely clear: migrant workers demanding to go home are no different from the students, tourists, workers stuck overseas, and those for whom India sent out expensive chartered flights overseas. We're bearing witness to a large-scale humanitarian crisis - yes, the pandemic is the biggest one, but equally, and growing, is the government's inept repatriation of workers, labourers. Of Indians, of humans, of our people who have to walk home hundreds of kilometres in the blazing heat, who are attacked outside train stations in their despair to leave for home. The government has been unable to provide either makeshift accommodation for this constituency of Indian taxpayers who built the cities we inhabit or to organise basic transport to return them home, in keeping with the mandate of #StayAtHome. This is the same constituency that voted the government into power, not the South Mumbai kids on their second term at some Ivy League joint zooming home in a hurry on Air India charters.

Now, this government is forbidding fellow Indians from leaving for their hometown, which they have every right to do, so they do not wither in hot cramped slum rooms, like rotting sardines. A lockdown has to be honoured - it's for our collective good. But in the process, a wretched, infuriating disparity grows evident, we classify Indians as humans on the distinction of class, religion, power, money. Everyone here without a voice is a lab rat for your benefit.

If you are a traveller to Europe, a member of the four per cent class of Indians who pays direct taxes, jets will be sent to get you back. If you are a member of the ninety-six per cent who pay indirect taxes (I am bifurcating the way the government would) and you live in a slum and want to go back home because there are simply not enough toilets where you live, then you are a variety of absurd things, impossible to clearly classify - an anti-national, 'those morons', 'why don't they listen?' 'but there are SO MANY of them!' 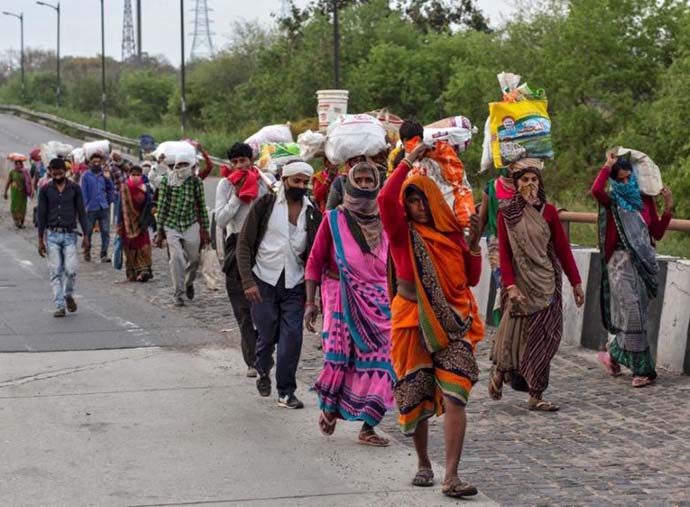 Migrant workers walk from Delhi to return to their villages. (Photo: Reuters)

We don't see them as people but as 'disruptors', as 'illiterates' - we use words like 'gawar' or 'vanar sena'. This has to stop. These are not middle-class kids breaking lockdown to go for a spin in their parents' cars because they're bored. These are people who have seen there is no room for them in the very cities they helped establish and so they want to go back home. This is not a migration but an exodus. They are not breaking the rules of quarantine - stay at home - but trying to follow the mandate. They want to go home so they can stay at home.

Stop calling them 'migrant workers' to put distance between them and us, as if to say 'they're not from here' which is to inadvertently ask: Where are they from? For your information, they're from India, like you. And who are they? Well, they made your city. Savita washes your dishes. Mohan does your laundry. Hussain fixes your plumbing. Bhiku cleans your cars. They wait on you at restaurants. They ferry chicken tikka for you on their bikes. Without them, you are nothing. If you have a shred of respite - respite that allows you to toy around with first-world ideas like 'dignity' in your life, it is because of that 'lot of huddled masses'. They are, simply, taxpayers. And they do the work you cannot, or will not, or are simply incapable of doing.

I am too private to rant; I believe it an essentially inelegant gesture. But this is not a rant. This is a call to arms. This is to say, look at how this government is treating other Indians who are no different from you. If push comes to shove, do you think the authorities are not going to come after you with their lathis and push you out of your listed flats and houses and put you on a wagon? This is to say I am on the side of the Indians stranded outside railways stations and despairing to go home. This is to acknowledge what they have done for us and to accept that in return we have done too little to help. The hospital beds - that the rich lie on right now - were made by them. The wards are cleaned by them. The gurneys that carry your sick and dead bear down on their shoulders. The hand sanitisers you use were packed into cartons, and loaded, and unloaded, by this large, roiling sea of aching, dispossessed humanity. If we don't raise our voices, we will all be silenced.

Also read: Home, away: Fear and longing in Noida

#Covid-19, #Coronavirus in india, #Lockdown in india, #Migrantlabourers
The views and opinions expressed in this article are those of the authors and do not necessarily reflect the official policy or position of DailyO.in or the India Today Group. The writers are solely responsible for any claims arising out of the contents of this article.

The writer is an internationally acclaimed author and photographer. His books include The Last Song of Dusk and The Lost Flamingoes of Bombay.