Wet is not waste: Wetlands may not look much to us, but they are a lifeline for birds

While offering water to the guests is customary, we are denying wetlands to our winged visitors

It’s easy to miss a splash of water. Easier still to miss it, if it’s nestled between grasses, reeds and languorous heads of buffalo. In the state of Assam — where paddy fields stretch for miles in an unblinking green world — you can puddle right into a wetland without even realising it.

A good wetland can look nothing like what you would expect, like just a slip of silver between vegetation. In Kashmir and Ladakh, wetlands look like mirrors. Only, not silver ones — but also blue, serene mirrors of the azure sky, fringed with the lacy filigree of clouds. In Tamil Nadu, wetlands can look like moving bodies of feathers, heaving under the collective cadence of the migratory bird. And the heaving has started, with the migratory clock ticking aloud. Birds have started to arrive on boughs and bowers, from snowy Russia and montane broadleaf forests. In Delhi’s Asola sanctuary, the quaint little Taiga Flycatcher — migratory but not a water-bird — has arrived from Russia. In Nagaland, more than a million heads and hearts, listening to the ticking migratory clock, are swooshing through the sky—hundreds of thousands of Amur Falcons from Siberia. Soon, flocks of Bar-headed geese will make their way from Tibet to wetlands of India. 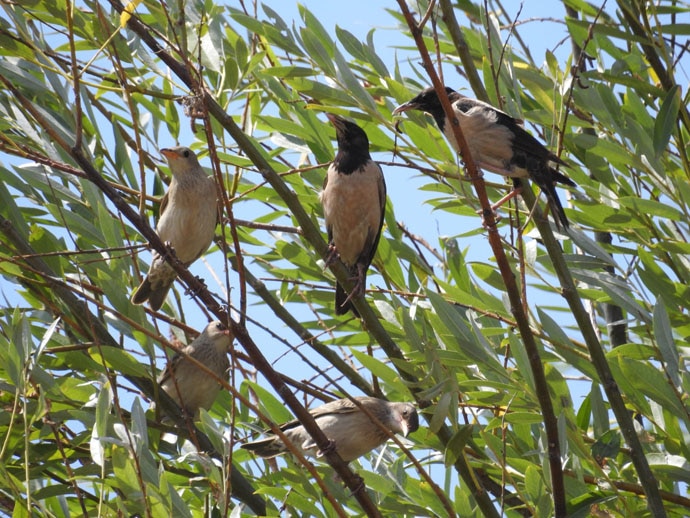 The wetlands of India may not look much to us, but they are a lifeline for birds. These slips of silver, sometimes darkening to a muddy trickle in the summer heat, sometimes populated by weeds or choked by pollution — have often been ignored. Traditionally, wetlands have been treated as drains, as wastelands, as bad places, as receptacles of our filth. For the first time, however, the Government has announced a national action plan for wetlands used by waterbirds. Amur Falcons by the hundreds of thousands in Nagaland, November 2018 (Photo: Neha Sinha)

Scientists have said that trees talk to each other. Wetlands too are more than the eye can see. They are not square swimming pools, neatly hemmed in. They spill their shores, they link up to other wetlands, they fill the groundwater table, and they often exist as a series of sites spread over an area.

For instance, a Black-necked Stork spotted in Gurgaon’s Basai became something of a celebrity because his beak was caught in a rubber ring. I wrote at that time that we were to blame for the beak snapped shut — because garbage and waste were finding its way into the wetland. The Stork was caught after five days of search, and then he was released in Sultanpur national park. Sultanpur has the fancy designation of a National Park; Basai is not even counted as a wetland, though it is identified by the scientist and birding community as an Important Bird Area. An Amur Falcon soars in the skies of Nagaland in November 2018 Photo: Neha Sinha

The stork, like many other waterbirds, uses the series of wetlands — Najafgarh jheel, Sultanpur and Basai. Attempts to conserve wetlands thus must take into account the series of wetlands that adjoin larger ones. The new action plan recognises this. It will set in place conservation action plans for wetlands of Keoladeo, Coringa, Bhitarkanika, Point Calimere, Pulicat, Sunderbans, Harike, Gulf of Mannar, Nal Sarovar and others; and also looks to conserve clusters of little known wetlands like Kurra jheel (Uttar Pradesh), Majuli island (Assam), Mahul-Sewri mudflats (Maharashtra), Halali reservoir (Madhya Pradesh) and J&K’s Hokarsar lake. These are sites that represent a large chunk of migratory birds and are significant for global population thresholds.

While India gets tens of thousands of migratory birds, we have not had sustained conservation work for many species. Bird ringing exercises — where birds have been ringed and then re-caught in another location — have found amazing things. Migratory birds travel great distances, joining up enchanted, though often endangered places. Greater Flamingos from Kazakhstan’s Lake Tengiz come to India.  They also come from Lake Ashk in Iran to India. And a little-known bird, the Great Knot, comes to India from China. The bird has been recovered in Chongming Island, China, and Point Calimere, Tamil Nadu. Yet, these champion marathon fliers have names unfamiliar to many. Arriving in a blink and gone in a heartbeat, migratory birds can face both the hunting net as well apathy in their silver swathes of wetlands. The new Plan will also create Single Species Action Plans for 20 species, including Greater Flamingo, Great Knot, Lesser Flamingo, Eurasian Curlew, European Roller, White-headed Duck, Yellow-Breasted Bunting, Ferruginous Duck.

This is a long overdue focus on birds that deserve more than an occasional hat tip by a birdwatcher. This is a claiming of ownership by India of birds that are international. The first phase for the plan is till 2023. Hopefully, by the end of two rounds, wetlands can finally shrug off the careless wasteland tag.