Millennium Tower is San Francisco's own Leaning Tower. Even 100 million dollar repairs did not help

Millennium Tower in San Francisco won awards when it was built in 2009. Little did the residents know that the building would come with its own 'lean and sink' feature.

Remember what happened in Miami last June? That condo collapse? Well. Looks like bad buildings are not just a third-world problem, given that the US is struggling with another multi-million-dollar project slowly sinking into the ground. We're talking about San Francisco's Millenium Tower.

San Francisco had a proud moment when the Millennium Tower was launched in 2009. It was one of the tallest residential buildings after all, and had won several construction awards on its creation. But the pride soon turned into shock when the building turned into a 'Leaning Tower of Pisa' and started sinking. Turns out it has been sinking ever since. Even after a costly US $100 million upgrade. Here's the unique story of a big costly mistake. Imagine for a moment that its 2009, you are a multi-millionaire entrepreneur and have been looking for a posh and cozy condominium for a few months. The town has recently been buzzing about a 58-storey Millennium Tower, a building that has an in-house wine cellar, film screening room and a button that allows residents to summon “engineering” help in 15 minutes. You buy a couple of luxe apartments for US $4 million each and well, life is good. For about 6-8 years.

Then you get this news, that in about a couple of years, you might have to move out.

The building lift, your bathroom taps and electric wires will stop functioning and the sooner you move out the better, because guess what. Your investment of about $4 million is soon going to sink into the ground. Quite literally. That's what happened with the Millennium Tower.

San Francisco’s Millennium Tower was an abode for the stars, until they realised that their abode was slowly sinking under the soil.

You know that leaning building in #SanFrancisco? Here's a look at sales within Millennium Tower (MLS sales only). Can you spot any change after the leaning story broke in later 2016? (CC @jonathanmiller). pic.twitter.com/Nqpu4KhkSc

BUT WHY IS IT TURNING INTO THE LEANING TOWER OF PISA?

Though the Millennium Tower is the third heaviest building in the area and the most recognisable one that leans on the sides, experts have two views.

As per US Geological Survey Research Geophysicist Tom Parsons, San Francisco has seen the most development in the last century. Being a city that has the most dense and tall buildings along with dense human activity, constructions have led to consistent loss of substantial amounts of ground water. This has caused the entire area around the downtown to sink, as it consists of a series of large and dense buildings.

Meanwhile, construction experts have mentioned that since the building was built on deep, dense soil and not bedrock unlike the other towers, this has become the main cause for the continuous sinking.

From Apt 35A Millennium Tower San Francisco L.A near the Bay of Angels.New Faultline discovered.Message for USGA,NOAA and EPA.Also for City Hall. Taken Telemetric image showing photon sat plume or natural gases from sub fracture fault. Exploration Inc was Correct all Along. pic.twitter.com/NyWowhhDNu

Though the 58-storey tower was built in 2009 and received multiple engineering awards on its construction, the residents were informed about the building’s unexpected “sink and lean’’ problem only in 2016.

By then, the sinking had increased to 18 inches and residents heard various creaking sounds. A glass window that was rated to withstand hurricane winds had started to crack and constant popping sounds alerted everyone about the structural failure. The management started repair work last summer to fix this sinking feature, but the problem got worse. The building sunk by an additional inch, which immediately halted all repairs. The building continues to sink at about 1.5 inch per year and tilt at a rate of 3 inch per year, irrespective of the work being conducted or not. One inch sinking at the foot means 5 inch lean at the top of the building. 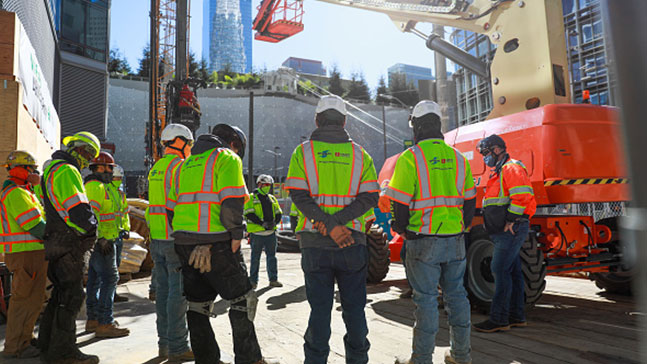 The building’s tilt caused residents to launch a lawsuit against the building’s developers and designers. This led to a blame game between the developers and the city officials. The developer of Millennium Tower blamed the sinking on the construction of the Transbay Transit Center, and cited eroding soil as the cause for the sink.

The litigation led to a confidential settlement in 2020 that included a US $100 million plan to fix the building and to compensate the homeowners for their estimated losses.

The US $100 million "Perimetre Pile Project" was designed to transfer 20% of the building’s weight to bedrock from its existing foundation system. The idea was to install 52 concrete piles, 250 feet below the ground, along the sidewalks of the streets, to anchor the building to bedrock. It would have looked like putting a bumper jack next to a flat tire. This was unanimously approved by the San Francisco Board of Supervisors.

Well. After 39 out of the 52 piles were installed, the building sank by an inch in a few weeks, which stopped the repairs. Again.

Looks like the team's initial mistakes will take an ugly (and costly) tilt, now that the building continues to sink even after repairs.

#San fransisco leaning tower, #Millennium tower san francisco, #Millenniumtower
The views and opinions expressed in this article are those of the authors and do not necessarily reflect the official policy or position of DailyO.in or the India Today Group. The writers are solely responsible for any claims arising out of the contents of this article.