NaMo 2.0 has undergone a major change in terms of the Cabinet ministers. Quite a number of old faces were ousted today as the PM reshuffled his Council of Ministers for the first time since the BJP won the 2019 Lok Sabha elections. Among the prominent faces who resigned today were Ministers Ravi Shankar Prasad, Prakash Javadekar, Ramesh Pokhriyal Nishank, Santosh Gangwar, Sadananda Gowda and Babul Supriyo among others. The new Team NaMo will lay emphasis on the educational qualifications of the ministers. Meanwhile, the youngest entrant to Team Modi is Nisith Pramanik of Cooch Behar, who is taking oath as a minister at the age of 35.

This brings us to the question — what are cooperatives that the PM is giving so much importance to?  Our Word Of The Day is defined by the dictionary as ‘a farm, business, or other organisation which is owned and run jointly by its members, who share the profits or benefits.’ It comes from the Late Latin word cooperor, which translates to ‘together with another’ or ‘combine’ or ‘unite’.

Talking of cooperation brings us to non-cooperation. West Bengal CM Mamata Banerjee, took to criticising the PM for his choice of ministers. It started when two ministers from Bengal — Babul Supriyo and Debashree Chowdhury — were asked to resign. Banerjee then moved on to targeting Dr Harsh Vardhan's resignation. However, Didi was facing the ire of the Calcutta High Court back home even as the reshuffle meeting was going on. The HC has imposed a fine of Rs 5 lakh on her after she appealed to remove Justice Kaushik Chanda from hearing her case against BJP leader Suvendu Adhikari’s election win in Nandigram. After imposing the fine, Justice Kaushik Chanda recused himself from the case.

From the eastern extreme of the country to the news from the West. The Elgar Parishad case accused lodged at the Taloja Central Prison in Navi Mumbai held a daylong hunger strike today in protest of the “institutional murder” of tribal activist, Father Stan Swamy. The protesters have sought a judicial inquiry into the death of Stan Swamy, for which they plan to request Chief Minister Uddhav Thackeray.

Father Swamy passed away on Monday. 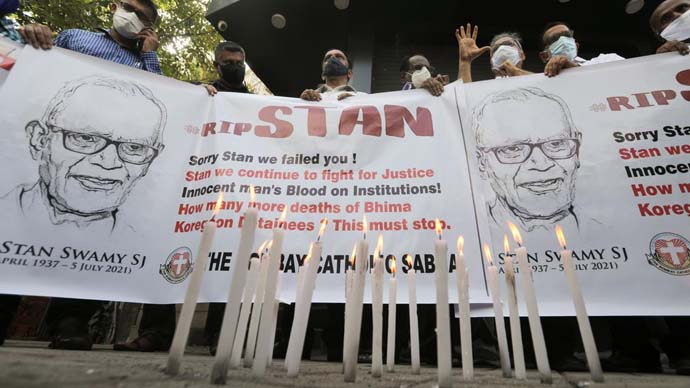 Protesters outside the church in Mumbai where Stan Swamy's funeral was being conducted today.  (Photo: Reuters)

While that was the octogenarian we lost earlier this week, India mourns two eminent nonagenarians who passed away today.

Allow us to first tell you about the veteran who was not as well-known. Olympic gold-winning hockey legend Keshav Datt passed on today due to age-related ailments. 95-year-old Dutt was a formidable halfback and was part of India's historic feat at the 1948 Olympics. The Indian hockey team had beaten the home team Britain 4-0 at the Wembley Stadium in London, winning the first Olympic gold post Independence. He was among those who defined India’s golden era in hockey. The other veteran’s demise, life, accomplishments and tributes have been in news since daybreak. Legendary Bollywood actor Dilip Kumar is no more. A shade short of a century, Kumar passed away at the age of 98 after he was admitted to Hinduja Hospital in Mumbai a week ago, following complaints of breathlessness. He breathed his last at 7.30 am today.

From eminent film personalities to the innumerable fans, everyone gathered to pay their last respects to Dilip Sahab.

Now, to something about Dilip Kumar that you might not have known. Dilip Kumar (then known by his birth name, Yusuf Khan), was a fruit seller in Bombay (now Mumbai) in 1942. As it turns out, one day, he was waiting for the local train at Churchgate station, after looking for jobs to supplement his income. Waiting alongside was Dr Masani, a well-known psychologist. Masani was on his way to meet Devika Rani, the owner of Bombay Talkies — the most successful film production house of that era. He asked Khan (Dilip Kumar) to come along and find work at the Talkies. The lure of going to a movie studio for the first time was strong, and Khan agreed. 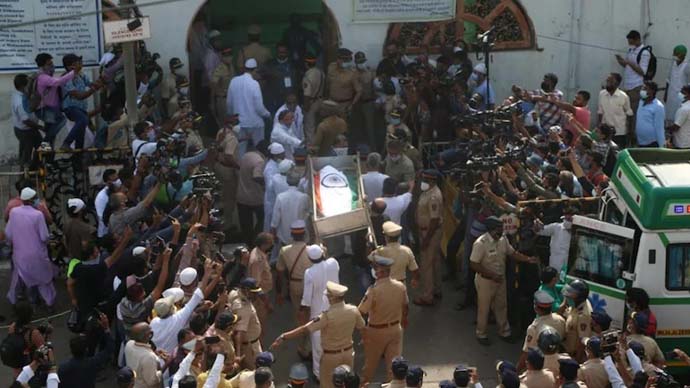 Fans who paid their last respects to Dilip Kumar at the legend's funeral in Mumbai today. (Photo: India Today)

They say that only a jeweller knows the true worth of a diamond. And Devika Rani was no novice assesser. One look at the young man and she offered him an acting job at the Talkies. Khan was reluctant and said that he was a fruit seller. Rani told him to learn to act along with selling fruits. She offered him a salary of Rs 1,250 in the year 1942. So sceptical was Khan at the princely offer that he asked Dr Masani to check with Rani if it was per month or per annum. Turns out, it was a monthly salary. He accepted, and the rest, as they say, is history.

He went on to deliver one hit after another and was one of the most sought-after stars of his times. But his magnum opus was K Asif’s Mughal-E-Azam (1960).

He was paired opposite Madhubala, and the couple was very much in love, on and off-screen at that point. Needless to say, the chemistry on-screen was sizzling. However, things soured badly between them halfway through the long production of the classic. Dilip Kumar and Madhubala were not even on talking terms when the most romantic scene of the film was shot. Dilip Kumar and Madhubala sharing a light moment in the initial days of shooting for Mughal-E-Azam. (Photo: Wikimedia Commons)

As Kumar recounts in his autobiography, Dilip Kumar: The Substance And The Shadow, “I sensed, Asif was seriously trying to mend the situation for her when matters began to sour between us, thanks to her father’s attempt to make the proposed marriage a business venture.”

They fell out over the Naya Daur court case in which Dilip Kumar testified against Madhubala and her father. “The outcome was that halfway through the production of Mughal-E-Azam, we were not even talking to each other. The classic scene with the feather coming between our lips, which set a million imaginations on fire, was shot when we had completely stopped even greeting each other,” he recounted. Madhubala and Dilip Kumar in the classic 'feather' scene from Mughal-E-Azam, that is considered amongst the most romantic shots in Hindi cinema.

But the professionalism of the pair is laudable. The film in itself became the highest-grossing Bollywood film at that time. Adjusted for inflation, the net income of Mughal-E-Azam was estimated to be Rs 13 billion in 2017.

You can read more on this and much more about Dilip Sahab in his autobiography, or pick up Dilip Kumar: Peerless Icon Inspiring Generations by Trinetra and Anshula Bajpai.

However, for today, we recommend you watch Mughal-e-Azam as the country mourns the legend. Adieu, Dilip Sahab.

And on that note, we say bye for today. See you tomorrow.