Daily Recco, December 9: Money Heist's team in red will fix all your blues

A team in red is what you need to beat the midweek blues. Money Heist series on Netflix will give you that much-needed adrenaline fix and keep you hooked.

Midweek blues? We get you. We also know what will get you out of it. You need a dose of a big heist, sky-high stakes, the team in red and The Professor’s mastermind. Unless you have been living under the rock, you would know that we are talking about Money Heist streaming on Netflix.

Originally called La Casa De Papel, Money Heist is a Spanish heist crime drama created by Alex Pina. The show was originally intended as a series to be told in two parts. But then, millions got hooked on to it, and in late 2017, Netflix acquired global streaming rights. It cut the series into several shorter episodes and when even that wasn’t enough, Netflix renewed the series for 16 new episodes — eight in Season 3 and eight in Season 4. And in July 2020, Netflix renewed the show for a fifth and, what it claims to be, the final part.

The series opens with the tale of El Profesor or The Professor (essayed by Alvaro Morte). The character is the dream for all the sapiosexuals out there. He is brilliant, a little nerdy and he has the introverted charisma and the astuteness to round up a team of great-looking social-misfits and create elaborate and long-prepared plans for the two heists to steal billions — one on the Royal Mint of Spain and the other on the Bank of Spain. All this time, they are being chased by the very beautiful and competent Inspector Raquel Murillo (played by Itziar Ituño). The chemistry and the underlying sexual tension between The Professor and Inspector Murillo is unmissable. And not just The Professor and Inspector Murillo, each one of the gang members — from the fiery Tokyo (played by Úrsula Corberó) who does not mince her words, to Nairobi (Alba Flores) who will give Monica from FRIENDS a run for the money (pun unintended) with her organisational skills; to the gentlemanly, brilliant and yet oh-so-conceited  Berlin (Pedro Alonso) who is also Professor’s older brother and second-in-command; to the master-hacker Rio (Miguel Herrán) — are visual treats. 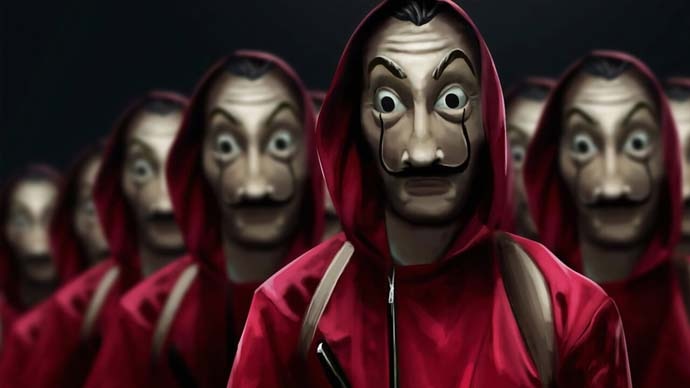 The third season takes the heist further with the stakes being higher than ever before — one of the gang members! Rio (the hacker) has been captured by Europol and the team has to get him back. This was one of the best seasons if you ask us (and the 44 million households who streamed it in the first four weeks of it being released). The end of Season 4 has a major plot twist, creating an effective teaser for the upcoming Season 5 that we cannot wait long enough! There is also a tragic turn in the plot that turned us emotional as we deal with a loss.

If you like Steven Soderbergh’s Ocean's trilogy series, take our word, Money Heist will certainly not disappoint you.

The plot, the direction, camerawork, casting and the acting is outstanding. It is, therefore, no big surprise that it most-watched non-English series on Netflix and bagged the International Emmy in 2018 in the Best Drama Series category (the same one that Indian series Delhi Crime bagged this year).

But then, you don’t need to watch it be a part of the crowd or because of the accolades that it has won. Watch it because of the nail-biting adrenaline-filled episodes. Even if heist drama isn’t your go-to genre, watch it. The non-dubbed and the subtitled version could better your Spanish conversational skills than any of the teachers out there.

Also read: Delhi Crime, the other side of the Delhi gang rape

#Netflix series, #La casa de papel, #Money heist, #Dailyrecco
The views and opinions expressed in this article are those of the authors and do not necessarily reflect the official policy or position of DailyO.in or the India Today Group. The writers are solely responsible for any claims arising out of the contents of this article.