Moon of Baroda, worn by Marilyn Monroe, to go on sale: Famous Indian diamonds and their legendary curses

These stones emerged from the mines of India, and passed from owner to owner, carrying glamour, glory — and curses — along.

When Marlilyn Monroe proclaimed to the world that diamonds were a girl’s best friend, she was wearing a stone — a 4.04-carat, pear-shaped, yellow diamond — that came from the bowels of India.

More than half a century since the song and almost 30 years since it was last seen in public, the diamond, The Moon of Baroda, will be seen again in November, as it goes under the hammer at the auction house Christie’s. The Moon of Baroda is a a 4.04-carat, pear-shaped, yellow diamond. (Photo: www.christies.com)

The Moon of Baroda is said to have originally belonged to the Gaekwad royal family, and has changed several hands over several centuries before ending up at the Christie’s auction table, where it is expected to fetch between $500,000 and $750,000.

Like almost every diamond worth its dime, the Moon of Baroda has its share of controversies and conspiracy theories. Interestingly, some of the most famous diamonds in the world have a few common traits — Indian origins, a reputation of bringing bad luck to their owners, and lots of mysterious buyers and sellers who tended to end up dead.

Here are the stories of three such diamonds.

The Moon of Baroda

The diamond is said to have been mined in Golconda, and remained in the possession of the Gaekwad royal family for centuries. Sometime in the 1700s, it was supposedly gifted to Maria Theresa of Austria, the Habsburg Dynasty’s only woman monarch.

The stone didn’t do her much good, and after Theresa died apparently due to the ill-luck brought by the diamond, the Habsburgs promptly returned it.

After a few decades, the Gaekwads either sold it to an unknown buyer, or it was stolen. According to a report in Hollywood Reporter, the stone next made an appearance in Los Angeles in 1926, as part of the collection of one Prince Ramachandra.

According to Christie’s, “the Moon of Baroda was acquired in 1944 by Samuel H. Deutsch, the president of a distinguished firm of diamond cutters in Cleveland, Ohio. He sold it to Meyer Rosenbaum, president of Meyer Jewelry Company in Detroit, Michigan, in 1953.” Along with the diamond, an autographed picture of Marilyn Monroe wearing it will also be auctioned. (Photo: www.christies.com)

It was Rosenbaum who loaned the diamond to Monroe for the promotion of the film Gentlemen Prefer Blondes, with its iconic song ‘Diamonds are a Girl’s Best Friend’. Though that was the extent of her association with the stone, its reputation was such that 10 years later, after Monroe died, some tabloids linked her recent troubles and death to the Moon of Baroda.

The USA has never had royalty, and hence no crown jewels, but that has not stopped this country built on private enterprise from having one of the most impressive diamond collections of the world. Many of these diamonds were donated by private collectors to the country’s museums — notably, the Smithsonian’s National Gem Collection.

One of them is the Hope Diamond, the largest-known deep blue diamond in the world.

The stone’s journey begins, again, from Golconda. While history says a French merchant, Jean Baptiste Tavernier, bought the diamond in India, legend is more lurid — a slave stole the stone from the mine by hiding it in a wound he inflicted on himself, was killed by the man he tried to sell it to, and cursed the man and the diamond before dying.

The ‘cursed’ stone was sold by Tavernier to King Louis XIV of France in 1668. Almost 100 years later, France’s royalty was hit by the French Revolution, and in the killing and looting that followed, the stone disappeared. The Hope Diamond is the largest-known deep blue diamond in the world. (Photo: Wikimedia Commons)

It resurfaced in 1812, conveniently after the 20-year-period in which someone could have been booked for stealing it had elapsed. It was eventually acquired by King George IV of the United Kingdom, who also managed to acquire a huge debt, and after he died, the stone was sold off to settle the debts.

After this rather hopeless history, the diamond was next heard of as being in the possession of Henry Philip Hope, a gem-collector from whom the stone gets its name. After several changes of hands, it was bought by Pierre Cartier.

In 1910, Cartier sold it to Evalyn Walsh McLean, an American heiress and socialite. Many ascribe the Hope Diamond’s dark reputation to Cartier, who reportedly spun such stories to make the stone more attractive to McLean.

McLean, however, did suffer misfortunes after the diamond came into her possession — her husband left her, her son died and her daughter committed suicide.

After her death, the diamond was bought by Harry Winston Inc, who eventually donated it to Smithsonian museum.ry

The “most beautiful diamond in the world”, coveted and contested by four countries, the shining jewel in Britain’s colonising crown, and the shiniest symbol of its plunderous history.

The Koh-i-Noor is today on display at the Tower of London as part of Britain’s crown jewels, and as recently as in 2016, the Indian government has stated on record that it wants the diamond back.

Pakistan and Afghanistan, too, have laid claims to the diamond, but Britain is clear it does not intend to give it up.

Koh-i-Noor is an alluvial diamond — it was sifted from river sands. It was supposedly knocking about in India’s royal treasuries for centuries, but its first recorded appearance is in 1628, when Shah Jahan decided to build a throne for himself. 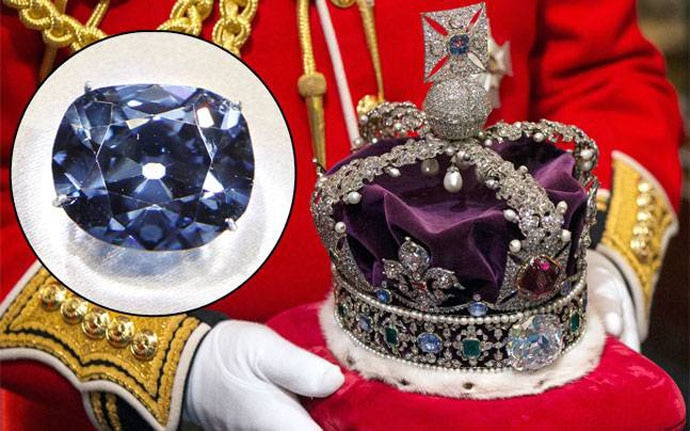 The Koh-i-Noor is today on display at the Tower of London as part of Britain’s crown jewels. (Photo: Reuters)

Shah Jahan did not believe in modesty, his court chronicler Ahmad Shah describes the throne as : “The outside of the canopy was to be of enamel work studded with gems, the inside was to be thickly set with rubies, garnets, and other jewels, and it was to be supported by emerald columns. On top of each pillar there were to be two peacocks thick set with gems, and between each of the two peacocks a tree set with rubies and diamonds, emeralds and pearls.”

On the head of this rather flamboyant peacock was placed the Koh-i-Noor.

Around 100 years later, when Nadir Shah came looting, the Koh-i-Noor, unsurprisingly, caught his eye, and he made off with it.

The diamond came back to India with the Sikh king Ranjit Singh.

Koh-i-Noor, by now, was more than a jewel — it was a symbol of might, power and potency. No wonder that to the British, the idea of owning the brightest jewel of a country they had managed to subjugate was appealing. But the manner in which they occupied it was rather extra.

Ranjit Singh had willed the diamond to a temple. The British made his youngest son, the 10-year-old Duleep Singh, sign the Treaty of Lahore, giving away the Koh-i-Noor along with his claim to sovereignty.

The diamond has remained in Britain since, but it did not travel alone. Also travelled with it was the legend of its curse, that it would bring bad luck to all male royals who wore it. Hence, the diamond has only been passed down the female line of the British royalty — from Queen Victoria to the current queen, Elizabeth II.

Also read: By renaming Allahabad to Prayagraj, how Yogi Adityanath ended up paying a great tribute to Akbar