On Mother's Day: Why every regular mom is a true 'rajmata' of her home

I witnessed five generations of motherhood, from my great grandmother to my wife and daughter. I know being a mother and running a home is a true test of individual skills and team spirit.

Time rolls on. Priorities change. But as I reflect this Mother's Day, for someone who had the privilege of being showered with love in the lap of my great grandmother, grandmother and my mother, I have had a unique opportunity of having observed the changing lifetimes of mothers in five generations already — with my wife and daughter bracketed in the same club later on!

I was born in an era — the early 1950s — when 99% of our mothers used to be housewives. Just housewives. Or better and truly put — rock-solid, sole homemakers.

My great grandmother came from a family of zamindars and contractors of Kota, Delhi and Kathua — from the lineage of the legendary KL Saigal Sahib's ancestors. She passed away at a ripe age of around 95, when I was about seven years old and the last mention of her in our big joint family, "Maan ji guzar gaye (Mother has passed away)" from my grandfather still echoes in my mind. This was also perhaps the moment when I first heard of the death of a close relation. An epitome of love, she was the universal Ma (Mother) of the family as her entire large lineage of all generations and ages addressed her as "Maan ji" only.

Her mere presence in the family was enough to inspire all and spread love and compassion. 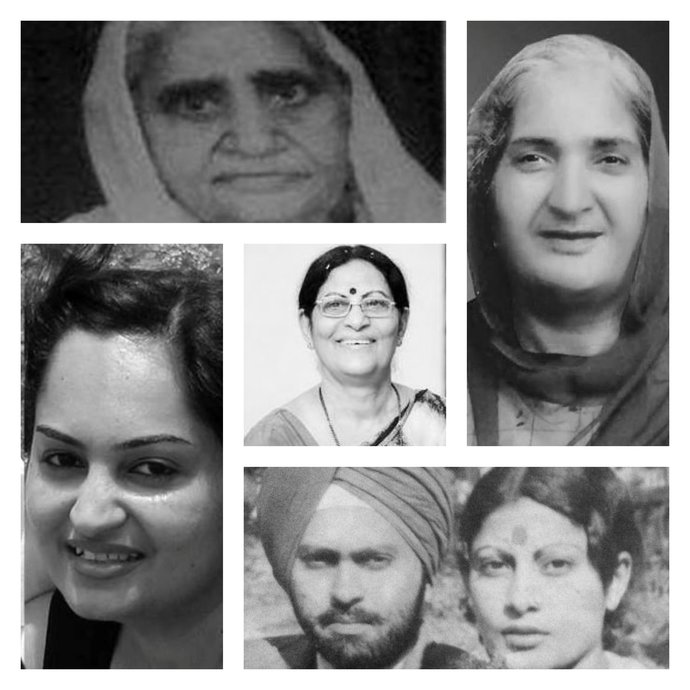 Each one is a super-mom: The author's great-grandmother, grandmother, mother, wife and daughter. (Photo: Tejinder Bedi)

My grandmother took over the reins of running the household after my great grandmother passed away.

She guided the family with great aplomb, to be finally remembered as the "RajMata" of the house. My grandmother had finished her matriculation from Rangoon around 1918, but her grasp of all the basic subjects — from Hindi and Punjabi — was truly amazing. Farsi was lost from the family with the departure of our "Maan ji" — though my grandfather continued his love for the language for long thereafter. My grandmother took a keen interest in ensuring that all of her grandkids learnt the basic scripts of Gurmukhi and Punjabi, while our grandfather, who topped his batch in BA (Hons) in English and Sanskrit from Prince of Wales University, took the pains to teach us English and Sanskrit.

My grandmother inculcated in all of us a habit of waking up much before the break of dawn.

On Mother's Day, I recall her sheer hard work. She did all the household chores — including managing three cows and two horses — beside her own large family. Extremely agile, energetic and active through her life, she would join the morning Prabhat Pheris (Prayer Processions), very common in Punjab in those times. She would then take account and maintain an up-to-date inventory of the large kitchen. She would take us all for religious movies and Ram Leela shows and ensured that the dinner ended with a homemade dessert for each member — even if she had to close the kitchen well past 11 PM.

The mantle of running this large family establishment fell on my mother's shoulders next. While she was the 'operational mother' for all, she became the universal Bhabhi — thanks to the reducing age gap among the growing siblings. However, she remained my soul's mother all along.

For us, she remains the last unifying mother in a joint family — all the relations started gradually branching out all over the country in pursuit of our careers, or to new abodes after marriage.

To keep me company, she used to remain awake as I studied late into the night — till 1 or even 2 AM. This practice continued right until I cleared the engineering entrance examination. Despite that, she would be up at 5 AM. But for her love and support, I would have never won scholarships or graduated as an engineer from the Punjab Engineering College in Chandigarh.

My mother hailed from a Hindu family (unlike the Sikh paternity I hail from), and we got the additional exposure of studying Tulsidasji's Ramayana and Srimad Bhagwad Gita during the early years of childhood. Being an accomplished singer, she ensured this legacy was passed on to me too. This trait has especially helped me to get acquainted with the musical legend of our times, and I now am focussing on reviving this childhood passion again, since I have retired from full-time corporate engagements.

My great-grandmother (Universal Ma), grandmother (RajMata) and mother (my soul's Ma) — all three remained within the four walls of the house, occasionally stepping out for the monthly refills for the large kitchen or other essential needs of the family. There were no aspirations other than managing and serving families and inculcating the best values in the kids. Moreover, there were not many career opportunities for mothers of that era, nor was the environment in the country too great to support it.

Though for my mother and her sisters-in-law, career options had opened up and they went on to qualify as teachers after their graduation (the most preferred profession of those times for women), my mother put paramount importance on managing and running the household. Till the end, my mother remained the queen homemaker of our very large household. My mother's role in the family was the first lesson in team management for me.

The role of the mother after my marriage in the late 1970s saw a drastic change as we had to shift out of the home. This was on the account of my job and it was the same for all the other siblings too. Once a large joint family was now reduced to a family of just about 5-6 members and the rest of us used to visit now and then.

As a mother, my wife had to look after just her husband and two kids. The support of part-time domestic help for daily chores — dusting, sweeping, cleaning, washing utensils and clothes, ironing and even cooking — has been available all through. There were no calls for a tiffin for the husband as the new workplaces offered good food. I think this was the other face of empowerment of homemakers in India. At best, this generation's mothers — if not a working woman — is more like a TV anchor of the day. She debates on every issue under the sun without giving time to complete any point to the members empaneled in the house.

Next is the current generation of mothers — whom, this Mother's Day, I would say are the real RajMatas of all times. They are well-educated, devoted equally to both their personal career or aspirations, as well as their family responsibilities. The mothers of today are not only fulfilling responsibilities as homemakers but also their social lifestyles. This, whilst doing their best to teach their children for their holistic development — an aspect outside the curriculum of schools.

The fathers of today — most still like me — are in absentia as neither the state nor employers have been able to see the damage of keeping them at work round the clock. Perhaps having more mothers Parliament and in positions of power in MNCs would truly turn the tables.

I view the mothers of today as the true Queen Moms of all times and this Mother's Day, this is my humble tribute to them — and to all our ancestral moms.

Also read: On this Mother’s Day, I think of all the lessons I have learnt from my son

#Motherhood, #Mother-Son Relationship, #Mother's Day Celebration, #Mother's Day
The views and opinions expressed in this article are those of the authors and do not necessarily reflect the official policy or position of DailyO.in or the India Today Group. The writers are solely responsible for any claims arising out of the contents of this article.