Just about anyone can start driving on the road in real-time in real traffic in the country.

The Motor Vehicles (Amendment) Act, 2019, with its enhanced penal provisions, became effective from September 1. India leads the world in road fatalities; the annual rate matching the population of Shillong. Indians don’t need to be given statistics and fines to wake up and smell the coffee.

The fact of road accidents has been experienced by every other family living in the country.

The new Act resembles an exercise in punishing the victims further. On the first day itself, almost 4,000 challans were issued in Delhi alone. In Gurugram, an auto-rickshaw driver was fined Rs 32,500 for jumping a red light; a scooterist was fined Rs 23,000. He surrendered the Activa, saying that the scooter was cheaper than the challan. In Bhubaneswar, another auto-rickshaw driver was slapped with a challan worth Rs 47,000, almost half the cost of the vehicle. An example is being set. 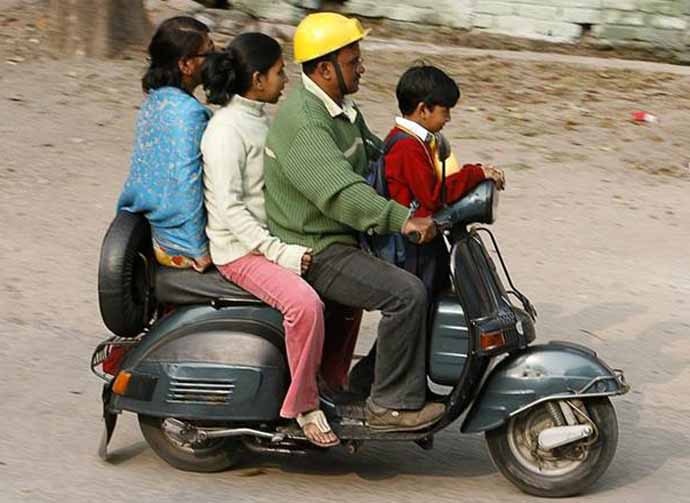 The government says hefty fines will help create a fear of law for violators of traffic rules. (Photo: Reuters)

Nitin Gadkari, minister of road transport and highways, zeroed in on one word to explain the rationale behind the government’s move: Fear.

It is an idea which basically affects the end-user who is a victim of road accidents herself. Punish her, fine (no pun intended). What about the system that a car owner has to navigate before she can put her car on the road?

When the government is checking the driver’s papers, it’s making sure that one has taken the trouble to efficiently navigate a flawed system. How does mere paperwork prevent accidents? You can extract Rs 5,000 from someone for not carrying a licence. What’s the procedure for obtaining the licence?

In town after town, in large swathes of the country, the regional transport office (RTO) is a maze-ridden den of corruption. You don’t step into the RTO, but into the warren of chai stalls surrounding it. This is where the touts are. Most RTOs don’t have a vehicle to conduct a test.

They do have a nice chart hanging with all kinds of navigation signs that one never actually sees on the road while driving. The poster is there for textbook purposes.

The Indian gets her licence without having to demonstrate driving skills or passing a driving test.

A friend failed his driving test in Germany three times. Bright enough to crack law exams, but not good enough for the Autobahn. What we have done in India is to throw this test to the winds and jump straight to fining the driver.

In India you procure a vehicle, learn to drive it yourself and get the licence from a tout. It could be a truck, a light commercial vehicle or a motorbike. Which means that just about anyone can start driving on the road in real-time in real traffic. The dangers are immense, for what you are driving has the ability to kill. You learn as you go along.

The working presumption is not a scientific one: That everyone’s life is dear to them so they will by default drive carefully, learn to swim quickly than sink.

Let’s talk about the various certificates that go into putting a vehicle on the road. For instance, senior citizens need to get an eye-test, among other things. You only have to go to the right doctor embedded in the system who will give you all the certificates in a neat little file without you having to bother with getting any tests at all.

The same holds true for pollution certificates that determine the ‘fitness’ of vehicles. All it does is to provide employment to whoever gets the contract to conduct pollution checks.

Often, the machine is missing when one takes ones car there; the man on duty says: “It’s on the highway somewhere.” In other places, they will have the machine, but it will give you a doctored, friendly reading. All this, in the end, turns out to be mere paperwork for which one pays bribes. Indian driving habits are probably the worst in the world. (Photo: Reuters)

The owner of the vehicle is to blame as well. We can blame governments for failing to stem the rot at the ‘rogue’ transport office, but what about the way we have chosen to drive?

Indians honk for no reason. That little moment of impatience, the illogical honking, is just one example of the peculiarities that afflict Indian drivers. Going an inch further is prioritised over waiting your turn.

When everyone behaves like this, treating other drivers like enemy obstacles in a video game, the pleasure goes out of driving.

Indians are the most pleasure-less drivers in the world. Getting on the road is entering anarchy. Along with fear, Indians need to learn how to make the process of driving a pleasurable one. In Delhi, at nightly neighbourhood checkposts, cops have been checking ‘DL and RC’ for eons.

It’s had no impact on the way people drive. Unless our driving behaviour changes, we will remain the joke madhouse of the world as far as traffic is concerned. It’s the first thing that a new visitor to India notices and the last thing she will forget.

Indians have had to work hard for their cars, from the Padmini Premier and Maruti 800 to the Santro and the i20, but have we learnt to sit back and enjoy the fruit of our labour?

Time will tell if fear will lead to pleasure; an ‘ease of driving’, as the new laws come into play.

#Road Accidents, #Traffic rules, #Traffic fines, #Motor vehicles amendment act
The views and opinions expressed in this article are those of the authors and do not necessarily reflect the official policy or position of DailyO.in or the India Today Group. The writers are solely responsible for any claims arising out of the contents of this article.