Was she actually fighting depression? Did she really want to move to an old-age home? We will never know now.

On August 6, 63-year-old Asha Sahani joined a list of men and women in India who died unwanted and unloved behind closed doors, their bodies lying in a "state of shocking decomposition" for days.

Her son, an IT professional, returned home to Mumbai from the US to find his mother's skeletal remains in the bedroom.

According to various reports, Ruturaj Sahani reached his mother's flat in Mumbai on Sunday and didn't get a response after ringing the doorbell for some time. When he broke into the 10th floor apartment, he discovered his mother's body, fully clothed, lying decomposed.

Sixty three is not old - considering the fact that the number of Indians over the age of 60 has hit an all-time high - but it can certainly get very lonely and depressing, especially in the maze of high-rises that makes our cities. The 2/3/4 BHK (bedroom-hall-kitchen) flats that house a growing India's aspirations and dreams of modern living also lead to secluded lives, confined to the gated apartments. No one is allowed to bother you nor bothered about your existence.

The police suspect that Sahani's body had been lying dead for a few weeks even though they are waiting for a post-mortem report. Her son had last spoken to her in 2016. The US-based techie, Ruturaj, meanwhile, has alleged that his missing complaint was ignored by the Oshiwara police last year. 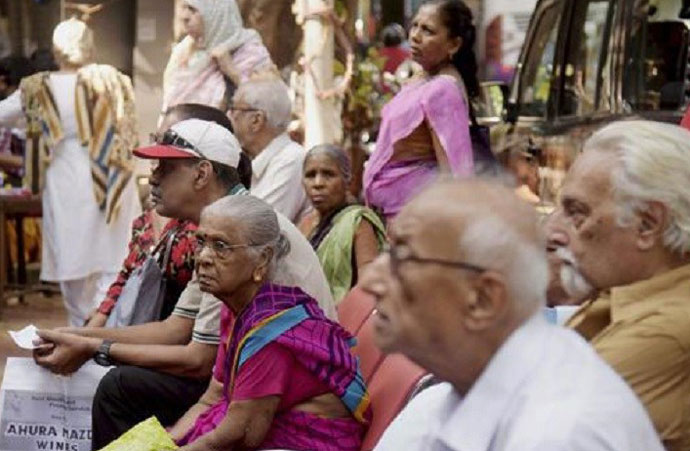 According to this report, he said he had filed an online complaint with the police after his mother, who used to live alone in the flat and went into depression after her husband's death in 2013, didn’t respond to his calls. That was on October 24, 2016. He said that he had even received a confirmation of the registration of his complaint on October 28, 2016.

Ruturaj has reportedly mentioned in his statement that his last conversation with his mother ended in an argument, following which she asked him not to call again. However, he said he tried calling her several times, she "never answered his calls".

According to Ruturaj, after his complaint, the police didn’t visit his mother’s apartment and only called his mom on her mobile number. And when she didn’t answer the call, they assumed that she left her house and went to an old age home, just as she had threatened Ruturaj in her last phone call.

Surprisingly, as Ruturaj claims, he even informed the society’s managing committee that she planned to move into an old age home. It's almost unbelievable that even after she stopped paying maintenance charges (for the flat) for several months, neither the fellow residents nor the society authorities tried to find out if she was still living there or alive.

Incidentally, the Sahanis owned both the apartments located on the 10th floor of the building, a reason why it is believed "neighbours were not alerted by any smell of decomposition".

But that no one noticed her absence for so long (in fact, how long, no one knows) is no longer surprising going by similar sensational discoveries in the recent past.

In July, a 49-year-old man was found living with the rotting corpse of his 78-year-old mother at their flat in Howrah till the stench of her body alerted neighbours. This incident was similar to the infamous Robinson Street house of Kolkata, where a man, Partho De, had lived for six months with the skeletons of his sister and two dogs and where his father Aurobindo's charred body was found in 2015.

Less than two years later, Partho De's body was also found in “burnt condition” inside a bathroom with half a bottle of petrol and matchstick beside it.

Although Asha Sahani's story has no resemblance to the Robinson Street horror, there is one thing which is common to the two incidents - while no one cared to know if people like Sahani or De (and his family members) were living amid them inconspicuously, everybody's interested in their deaths and the personal details emanating about their family lives.

3 Robinson Street is now a "hot property" - it sold for Rs 20 crore in July this year. Just after the horror story of Partho De's life unravelled in 2015, all kinds of people, including the media, thronged the place. According to The Telegraph, it became the new selfie address in Kolkata, where people would come to take pictures and post it on Facebook with messages such as this: “Got tickets to Hitchcock’s Psycho House in our very own Calcutta – feeling scared at Robinson Street.”

As Sandip Roy wrote in Firstpost in a 2015 article, "If anything the story points to our complete helplessness when it comes to dealing with mental problems... But the creeping onset of depression and schizophrenia pass unnoticed or at best is dismissed as eccentricity."

In Sahani's case too, nobody came to notice that she was missing for so long. Neighbours didn't care to ring her doorbell and find out. The son "stopped" calling when she didn't respond, the police called and, when she didn't answer, assumed she's moved to an old-age home.

"It is a very tragic and saddening incident. The woman used to stay completely alone and was in depression. The flat in which was living has several bedrooms. It's a huge flat and therefore staying alone in depression is difficult. It is sheer negligence on part of her relatives and son," a police officer was quoted as saying.

As the police try to piece together the exact circumstances of Sahani's death, it also brings to fore the fact that the country doesn't care much for its old (not that it cares for its children).

According to this study, as many as 43 out of every 100 elderly people in India are victims of psychological problems due to loneliness, and other relationship issues.

"43 per cent older persons are facing psychological problems due to loneliness, relationship issues. It was also observed that more than 45 per cent elderly claimed that their family members do not care for their needs and interests," the study by Agewell Foundation revealed. The study was based on the feedback from 50,000 older persons across the country during the months of June and July this year.

But this isn't a new revelation. According to a 2013 Global AgeWatch Index, India doesn't care for its elderly citizens. It ranked a dismal 73rd in a list of 91 countries.

It's is also alarming because India has more than 100 million elderly at present and the number is only increasing. By 2050, India’s 60 and older population is expected to reach 323 million people.

Was Sahani actually fighting depression? Did she really want to move to an old-age home? We will never know now.

Also read: How horrible is it to live among the dead