Munawar Faruqui and Kangana Ranaut, hate to love in the Lock Upp

Munawar Faruqui who won the reality show Lock Upp was a big critic of the host Kangana Ranaut before the show. But after the show, things look good between them.

“Maine bohot kuch khoya hai, boht kuch paaya hai, lekin logon ko hasana hai (I have faced many setbacks in my life, but I want to make people laugh),” this was the first thing I heard from Munawar Faruqui in a video. The 30-year-old stand-up comedian, who was jailed in Indore, Madhya Pradesh in January 2021 for his "jokes" hurting religious sentiments.

Munawar was denied bail thrice by the sessions court in Indore and once by the MP High Court. He was finally granted an interim bail by the Supreme Court on February 5, 2021.

But his arrest in the case earned him up with a ticket on a reality show, Lock Upp, which was produced by Ekta Kapoor and hosted by Kangana Ranaut. The show commenced on February 27, 2022. It had 16 controversial contestants who were locked inside the prison. And guess what, Munawar won the show.

Known as the mastermind of #LockUpp, Dongriwala @munawar0018 took home the title! He received the highest votes and #KanganaRanaut picked him as the ultimate winner of season 1. We are happy for him and congratulate him for his win. #BadassJail #AtyaachaariKhel #MunawarFaruqui pic.twitter.com/jIo5LUMV2O

It was his banter with Kangana, his love couplets recited for fellow contestant Anjali Arora or his tiffs with another contestant Payal Rohtagi that gained prominence. Munawar had managed to attract all the limelight towards him. In the finale, he emerged victorious against Payal Rohtagi.

After winning the show, "Dongriwala" Munawar went to home in a BMW with his winning trophy. He was given a heroic welcome by his supporters.

Public love towards MunawarIt is the love of the public that the crowd continued to follow Munavar all the way. In the same way, Munawar gave love and respect to his loved ones.@Team_Faruqui #MunawarFaruqui#MunawarFaruqi BADASS WINNER MUNAWAR pic.twitter.com/lVjDp2eRic

And why not? The boy had outsmarted 15 people in "prison". He was also one of the biggest reasons behind the success of the show. Within 19 days of its release, Lock Upp was viewed 100 million times.

MUNAWAR VS KANGANA BEFORE THE SHOW

Munawar was highly critical of Kangana because of her political leanings. In one of his tweets, he took swipes at Kangana for being the flag-bearer of anti-nepotism and also having her sister Rangoli Chandel as her manager at the same time.

Not only her stance on nepotism, he also took digs at her rumoured link-up with Hrithik Roshan. Here is what he said:

It just didn’t end here.Munawar also took a dig at Kangana's theatrics after the death of actor Sushant Singh Rajput.

Besides this, Munawar taunted Kangana on Twitter by after the birth of Virat Kohli and Anushka Sharma's child. "Dear Kangana, If Virushka's baby becomes and actor or a cricketer, should we boycott the kid?" tweeted Munawar.

MUNAWAR ON THE SHOW

When Munawar entered Lock Upp, in his first appearance itself, his equation with Kangana was visible. When Kangana said that had there been a capital punishment on the show, she would have sentenced Munawar to it. To that Munawar replied, “Aap please mujhe dhamki mat dijiye (Please don’t threaten me).”

It was clear that he would have a no holds barred approach on the show. But as the show proceeded, Kangana seemed to enjoy the way Munawar was playing the game.

Even Ekta Kapoor, who is the producer of the show, came and appreciated the way Munawar was going along. It was all of this culminated into a massive fan following of Munawar. 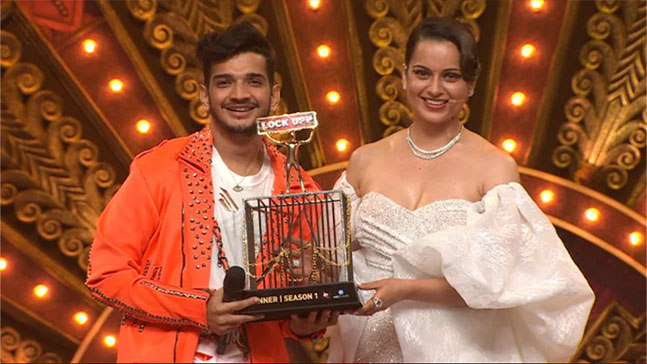 Kangana and Munawar's so-called rivalry resulted in views for the show. In the end, Munawar signed off with the trophy in his hand, by saying a couplet which goes:

At the end, we can just say… #Munawar and kangana ranaut, #Munawarfaruquiwins, #Munawarfaruqui
The views and opinions expressed in this article are those of the authors and do not necessarily reflect the official policy or position of DailyO.in or the India Today Group. The writers are solely responsible for any claims arising out of the contents of this article.