Did arrival of Muslim invaders a thousand years ago destroy Hindu culture?

The arrival of Muslim invaders a thousand years ago dramatically transformed the Hindu culture. Like in any invasion, there was destruction, mayhem and trauma. Hindu Kush in Afghanistan literally means 'killer of Hindu (slaves)' during early phase of this invasion and the ruins of Vijayanagara by a confederacy of Muslim kings are testimony to later phase.

However, the damage was neither absolute nor permanent. Over time, the ever-resilient Hindu culture recovered and adapted itself to the new realities and eventually a new Hindu culture emerged that engaged with Islam both philosophically and socially.

The Indian subcontinent is relatively isolated from the rest of the world because of the Himalayas bordering the north and the sea bordering the south. Still, people have come through mountain passes and seaports for over five thousand years. Some came to trade, some came to loot, some came to rule and some looking for a better home. Each one who came in changed India. This means, India has always had foreign influence over its history in various degrees: from Egyptians, Persians, Arabs, Chinese, Greeks, Romans, Central Asians, and Europeans. 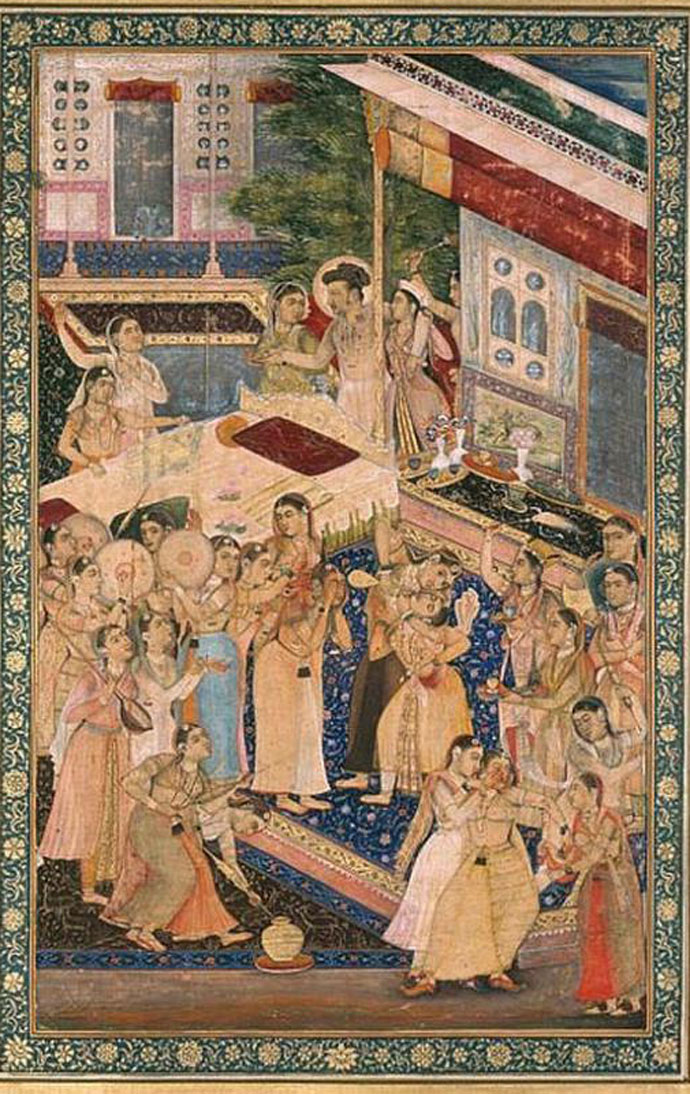 Emperor Jahangir celebrating the festival of Holi with the ladies of the zenana. (Credit: Wikimedia Commons)

Indian culture is like a masala box. The dominant spices we identify as Hindu, but not all of them came into being here, or at the same time. Some came into being following indigenous challenges, such as the rise of Buddhism, which introduced ideas of monastic orders. Others came into being following foreign challenges, such as the arrival of the Greeks who introduced the idea of stone temples enshrining stone images of heroes and gods, very different from the portable imageless rituals of Vedic culture, or the river and mountain and tree gods of local tribes. Some spices refuse to be identified as Hindu, but do not mind being called Indian. Some spices insist on being identified as non-Indian. Then there are spices that are best called global, as they are found everywhere.

As in any culture, there are many Indians and Hindus who believe in the idea of "pure" culture. Notions of "purity" are always mythological (subjective), never scientific (objective), however they play a key role in shaping culture. This becomes evident when one thinks about the influence of Portuguese on India. Portuguese brought potato to India from South America; they also spread Christianity. Many purists don’t see potato as a foreign vegetable. But they do see Christianity as a foreign idea, and hate it vehemently, even as they eat an aloo paratha.

Islam rose 1,400 years ago in Arabia. Islam reached Kerala via sea-traders during the lifetime of the Prophet Muhammad. When we speak of Islamic invasion, we usually refer to the invasion of north India (Punjab and Gangetic plains) that eventually impacted the East (Bengal) and then the rest of the subcontinent. This happened in two phases: the first less successful one spearheaded by Arabs that reached the borders of India nearly 1,200 years ago, and the second more successful one spearheaded by Turks and Mongols that began 800 years ago.

Please note: historians avoid the term Islamic invasions and prefer using words like Arab, Turk and Mongol/Mughal invasions because of two reasons. First, many see these invasions were motivated by economics and politics not religion. Second, they want to avoid the communal vocabulary. Many Hindus feel the very same historians do not give Hinduism the same respect. They argue that if you do not link Islam to violence, how can you link Hinduism to casteism? Why cannot both be seen as outcomes of politics and economics, not religion?

In the first phase of Islamic invasion, most of India remained unaffected. The spread of Islam destroyed the Buddhist and Zoroastrian centres that once thrived along the Silk Road. This would have sent shock waves across the world. If there was any impact on Indian thought, it was indirect, not direct. Some people say that although bhakti and monotheism is alluded to in the 2,000-year-old Bhagavad Gita, the widespread popularity of bhakti and monotheistic ideas in the last 1,000 years may have been the result of Islamic influence. Many Muslim kings had Hindu courtiers (Man Singh in the court of Akbar) and many Hindu kings had Muslim courtiers (Hakim Khan Sur who fought alongside Rana Pratap in Haldighati). Credit: Google

The second phase of Islamic invasion saw great violence. Warlords from Afghanistan and Central Asia such as the Ghaznavids sought to loot the legendary wealth of India, mostly hoarded in temples. Fuel for these raids was provided by the religious zeal to wipe out the land of idolaters. These invaders wiped out cities and temples in their wake, and went back with gold and slaves. We can argue endlessly on how much damage was physical, and how much was psychological, how much was real and how much was propaganda, how much was motivated by economics, and how much by religious zeal. But the fact is, Hinduism was never the same.

Over time, many Turk, Afghan and Mongol warlords decided to settle in India. From around 800 years ago, a sultanate rose in Delhi led by Mamluks, Khiljis, Lodis and Tughlaqs. From around 600 years ago, there rose sultanates in the Bengal and Deccan regions. From around 400 years ago, the Mughal Empire established itself in north India, which gradually spread to the south. Temples such as Madurai in the south, Ujjain in central India, Puri in the east, Somnath in the west, retained memory of plunder by Muslim kings in local lore.

But in these times, dramatic changes took place in Hinduism. Some happened because of Islam. Others despite it.

While many temples in places such as Kashmir, Gujarat and the Gangetic plains were destroyed, their pillars used to build mosques, many new grand temples were built on ancient sites by local Hindu kings in the last thousand years to show their power. The current edifice of the Jagannath temple that we see today was built 800 years ago by Chodagangadeva. Again most of the grand structures we see in Tamil Nadu and Andhra Pradesh such as the Meenakshi temple in Madurai are about 400 years old, built by Nayaka kings. In the north, people avoided building temples, and chose to worship the deity inside homes, giving rise to the Thakur-ghar or Haveli culture seen in Rajasthan and central India. Temples such as Madurai in the south, Ujjain in central India, Puri in the east and Somnath (above) in the west, retained memories of plunder by Muslim kings in local lore. Credit: Google

It is within the last thousand years, that acharyas such as Ramanuja, Madhva, Vallabha, Nimbarka and Chaitanya consolidated theistic Vedanta philosophy that is today seen by many as the main foundation of Hinduism.

It is also within the last thousand years that we find the rise of various sacred Hindu literatures in regional languages, including most of the Ramayanas and Mahabharatas that we find in Tamil, Telugu, Malayalam, Kannada, Assamese, Odia, Bengali, Gujarati, Marathi, Marwari and Hindi.

Bhakti songs of Meera, Ravidas, Tukaram, Annamaya, Kshetrayya, and Purandaradasa were all written in the past 500 years. While oral tradition has been the mainstay of Hinduism, in many Hindu communities manuscripts of the Bhagavata or the Ramayana started being enshrined and worshipped, for example Bhagavata-ghara in Odisha, indicating the increasingly popular value given to books, clearly an Islamic influence.

In the past 400 years, sultans of Deccan patronised Hindustani classical music, Nawabs of Oudh celebrated Krishna-leela and Ram-leela and established the Bada Mangal festival of Hanuman in Lucknow. Holi became a royal festival, celebrated by Hindu and Muslim kings.

The Mughal court patronised Persian painters who established the Indian miniature style of painting that resulted in fine art works for various local Rajput kings and Hindu noblemen on themes from the Ramayana, Mahabharata, Gita Govinda, Bhagavata and the Puranas. These are displayed in museums around the world.

There were many communities where the lines between Hinduism and Islam were not rigid. For example, many Rajasthani musicians who sang Hindu bardic lore were Muslim. In Bengal, patua painters who painted the epics on long pieces of paper were Muslims. In Kerala, there is the Mapilla Ramayana of the Malabari Muslims, where we find words like shariat used in the Ramayana. The famous ballad Padmavat about the attack on Chittor by Allauddin Khilji was composed by a Muslim poet, Malik Muhammad Jayasi. In many shrines, holy men were seen as pirs by Muslims and as jogis by Hindus. Many Muslim kings had Hindu courtiers (Man Singh in the court of Akbar) and many Hindu kings had Muslim courtiers (Hakim Khan Sur who fought alongside Rana Pratap in Haldighati).

Costumes changed. In north India, the ghunghat, or covering of women’s head and faces became common in Hindu households, a practice still not seen in the south. In temples of Shrinathji in Nathdwara one of the many attires of the deity was Mughal-vesha. In Srirangam, the deity was given a Muslim consort Thuluka Nachiyar. In many parts of the south, the deities had Muslim guards and Muslim companions such as Vavar of Ayyappa-swami and Mutthala Ravuttan of Draupadi-Amman. 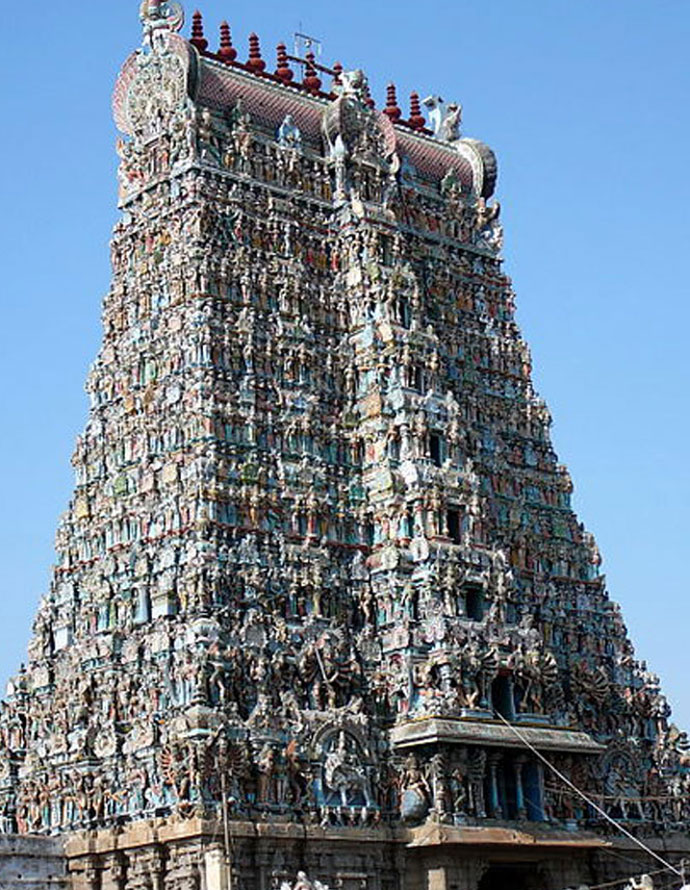 The Meenakshi temple in Madurai was built by the Nayaka kings around 400 years ago. (Credit: Wikimedia Commons)

According to one theory, Islam in India acquired a unique Indian flavour. Only here did Islam co-exist with another religion in harmony. In Europe, it fought bitter religious wars with Christianity. In Southeast Asia, Buddhism and Hinduism were seen as foundational cultural influences, but with Islam clearly as the religion on top. In India, Islam became the practice of certain castes. For example there could be "high-caste" landowners who were also Muslim. Or there were "low-caste" butchers who also happened to be Muslim. This created a kind of tension-filled harmony with violence on the edges, but no full-fledged communal conflict.

It was the British who preferred to see India as a collection of religions rather than a collection of castes. They defined Hinduism and made it a collection of castes, excluding the caste status of those who followed Abrahamic religions, village reality notwithstanding. It was the British who tried to force-fit 3,000 jatis of India into the four varnas of the Vedas. Caste politics meant no jati had majority anywhere in India, and was too complicated to handle. Religion politics meant Indians could very easily be distracted by communal politics.

History, politics, economics, culture and religion are very complex subjects. When people try to simplify Indian history by speaking of 1,000 years of Muslim enslavement of Hindus (or that Brahmins enslaved Dalits, or Sanskrit is source of all wisdom) we need to be vigilant about the manipulative nature of these half-truths. Incomplete truths are often more dangerous that falsehoods.