Why do we have such a low opinion of Muslim women?

Islam anticipates the demands of Western feminists by more than 1,000 years.

A mother is a school. Empower her and you empower a great nation. - Hafez Ibrahim, Egyptian poet

The portrayal of Muslim women that we glimpse in the media is grim and sombre. The public perception of them is one of stubborn stereotypes: supposedly powerless and oppressed, behind walls and veils, demure, voiceless and silent figures, discriminated and bereft of even basic rights.

This picture keeps reinforcing itself, largely because this is how the Western media caricatures women in Islam. Recurring images beamed into our homes and phones keep strengthening the belief that Muslim women are being denied access to education, social space, privacy and educational and development programmes for socio-economic uplift.

But it has also reduced Muslim women to a stereotyped singularity, plastering a handy cultural icon over much more complicated historical and political dynamics. In many Arab countries, and in Iran, more women are in university than men. In Egypt, women make up a bigger percentage of engineering and medical faculties than women do in the US.

It is true that in societies trapped in poverty, illiteracy and ignorance, women continue to receive abominable and oppressive treatment. But then, this is true of all societies. Muslims cannot be singled out for such a flawed social order.

The pictures we get of wife beating and other retrograde practices imposed on Muslim women are clearly aberrations which should not be generalised as the usual Muslim stereotype. The wrong practices rampant in some such societies have much to do with illiteracy, ignorance and sometimes dire poverty.

In several cases, the plight of Muslim women is a direct consequence of a repressive and highly discriminatory State. A dispassionate analysis will reveal that vested interests in all societies, particularly those driven by patriarchal values, have resisted the uplift of women and have failed to concede them the legitimate rights they have been guaranteed by their faith, community and the State.

This distortion, however, should not deflect our focus from some pathbreaking and stellar contributions of Muslim women, not just to Islamic civilisation but to the secular society as well.

Muslim women across South Asia are slowly getting empowered to stand up to patriarchal practices that undermine their dignity. In literate societies, Muslim women, like their counterparts in other creeds, are an empowered community.

They believe that rights have been accorded to them in foundational Islamic texts but that cultural interpretations of these same texts disallow what is rightfully theirs. They do not call this a feminist struggle but describe it as reclamation of their faith. 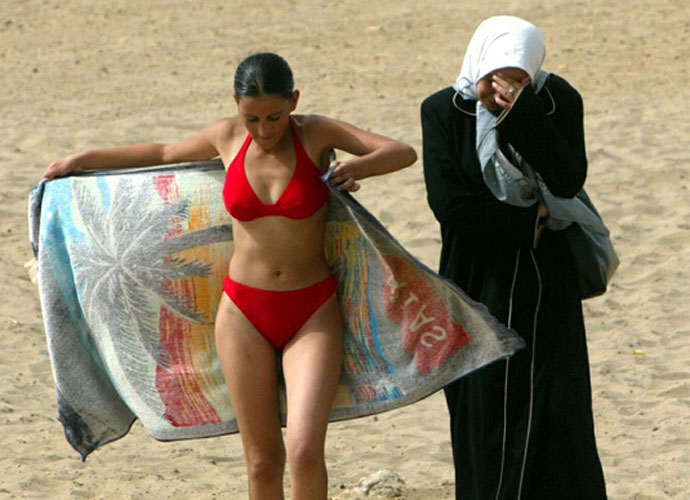 Muslim women certainly do not share the western notion of feminism. (Photo: Reuters)

Muslim women’s activism around education and equal opportunities are often underpinned by their emancipatory readings of foundational Islamic texts.

They are also challenging patriarchy that all women experience around unequal power hierarchies in society and the objectification of women’s bodies in some sections of the media.

In this regard they stand with their sisters of all backgrounds.

The traditional importance of Muslim women in Islamic society has always been and continues to be the foundation of the Islamic family.

Social values strongly reinforce orientation towards marriage and children as the normative pattern based on Prophet Muhammad’s own example. Childrearing, early education and socialisation of children are among women’s most important tasks in Islamic societies worldwide.

Although traditionally excluded from the public male domain, Muslim women have been privately involved in study and oral transmission of Islamic source texts (the Quran and Hadith). In modern times, they have entered into both secular and religious forms of education with enthusiasm, supporting their long-standing role as family educators and moral exemplars, as well as training for professional careers in the workplace outside the home.

Central to Islamic belief is the importance and high value placed on education. From the true Islamic point of view, education should be freely and equally available to women as much as men.

Islam anticipates the demands of western feminists by more than 1,000 years. A stay-at-home wife can specify that she expects to receive a regular stipend, which is not that far from the goals of the Wages for Housework campaign of the 1970s.

Elsewhere, the fully empowered Muslim woman sounds like a self-assured, post-feminist type, a woman who draws her inspiration from the example of Sukayna, the brilliant, beautiful great-granddaughter of the Prophet Muhammad. She was married several times and, at least in one if her marriages, stipulated in writing that her husband was forbidden to disagree with her about anything.

All these conditions are based on the canons of Islam and on early Muslim practice. A Muslim woman cannot be forced to enter into marriage without her agreement; indeed she has the right to revoke a marriage to which she did not agree in the first place. A Muslim woman cannot be forced to enter into marriage without her agreement; indeed she has the right to revoke a marriage to which she did not agree in the first place. (Photo: India Today)

We now have an inquisitive and empowered generation that will not easily accept rules and codes without reasoning them out and arguing on every strand before embracing it.

A very heartening development is that, unlike earlier times, when only those who had finally retired from all worldly responsibilities would make the hajj pilgrimage, the youth is very actively participating in this most potent Islamic exercise.

A hajj is a revolutionary experience that radically transforms one’s mindset and provides a correct perspective of Islam. An exposure to a composite global culture gives an invigorating perspective to the pilgrim.

Few Muslim women outside the urban areas may want to behave like western women. The high rate of divorce and sexual disease are common consequences of the reckless drive to equate the sexes and "free" sexual relationships.

Comparison may mean little outside the cultural context but it is important to point out that, until 100 years ago, western women had virtually no rights in law or practice. Over 1,000 years before the first European suffragette, Islam gave far-reaching rights and a defined status to women.

But these western attitudes have undoubtedly helped to stimulate discussions of the problem in Muslim urban society, thereby revealing the gap between the talk of the Islamic ideal and the actual situation of women.

Women emerged as the centrepiece of the western narrative of Islam in the 19th century and, particularly, in the later 19th century as Europeans established themselves as colonial powers in Muslim countries. Their narratives simultaneously and hypocritically perpetuated the Victorian English narrative that European men were superior to women while denigrating Muslim culture for being oppressive to women.

Muslim women certainly do not share the western notion of feminism. These women do not accept that being feminist means being western, and believe that western women should be respectful of other paths to social change.

First of all, there are multiple causes of discrimination against women and religion is but one.

Thirdly, it is futile to focus on misery elsewhere as an escape from the realities of our own lives.

And fourth, the issue of power remains crucial for understanding gender inequality in any society.

Women are now elbowing their way into political and civil society, and universities. Despite present cultural and political obstacles, they are finding opportunities to rise - and to bring their societies up with them. They feel the key is to do so within Islamic paradigms. We now have female politicians, journalists, entrepreneurs and educators, urban and rural, who are making impressive inroads.

Western thinkers and practitioners must reconsider their assumptions about the role of Islam in women’s rights and approach this topic with a more nuanced lens. They must understand the necessity of recognising and consciously accepting the broad cultural differences between western and non-western conceptions of autonomy as well as respecting social standards that reflect non-western values.

They should heed what First Lady Michelle Obama expressed to hijab-wearing students when she told them: “You wonder whether anyone ever sees beyond your headscarf to see who you really are, instead of being blinded by the fears and misperceptions in their own minds. And I know how painful and how frustrating all of that can be.”

Also read: Triple talaq has no place in the Quran

#Islam, #Feminism, #Muslim women
The views and opinions expressed in this article are those of the authors and do not necessarily reflect the official policy or position of DailyO.in or the India Today Group. The writers are solely responsible for any claims arising out of the contents of this article.